I have put my Audi A3 on hold for now and decided to start modelling the car that I had quite a few problems with the first time. 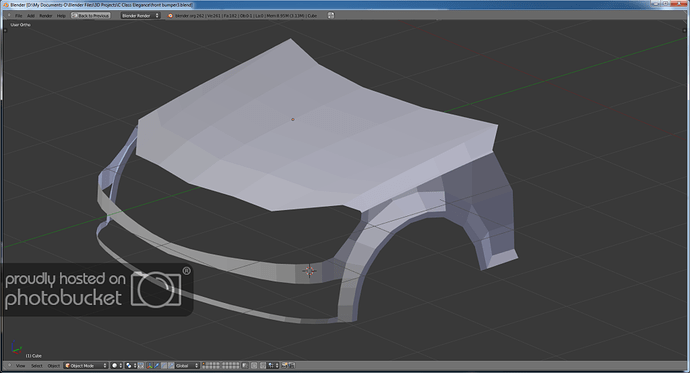 I have decided to leave subsurf off until the body of the car is finished. All the panels may look joined together but I have a line of polygons between the gaps for now, and then I will delete them once I’m happy with the shape.

I’m not a car modeler, and I could be straight up wrong, but I don’t understand the choice to leave subsurf off. I think if you don’t turn it on till it’s done, you’ll just find that it isn’t done. You need a certain level of mesh density to control how and where the subsurf is smoothing. Given the mesh as I see it now, subsurf is going to pull that fender flare all out of shape.

I’m not saying you should work with subsurf on. I’m just saying that it makes more sense to me to add the modifier and bump it up now and then to see where you’re at.

That’s just my 2 cents, but today only, the first 100 callers can get it for only 1 penny.

BentFX, i model cars, generally starting with subsurf on makes the job very difficult, the easiest way is model a whole section then add subsurf and neaten it up and then modell the next section leaving subsurf off till thats done aswell.

GrandeP, looking forward to seeing this

The part that is circled in red is what I’m struggling on and I can’t seem to get the thing right, especially at the point where one part of the bumper joins up with the other.

I can get more photos if anyone needs to know what I’m trying to achieve.

I managed to get round that snag (just).

Here’s some more progress on the front but it will need more tweaking to get it to look right.

such a nice car

There’s a few problems though:

On the front bumper where those small fins come down there is something strange going on when I apply subsurf, but I will worry about that later.
Also I’m not too keen on the way I have laid out the faces for the arch bulge on the rear doors.

but I will worry about that later.

fix it now when you have simple mesh.

Sorry I don’t understand what you mean. Can you post a picture with explanation please?

Here’s an update with Subsurf applied. The problem areas are starting to show, such as the whole bumper and the rear wings.

I can never get a smooth mesh on these bloody bumpers…