So i’m still in post on my second live action short but got to get the feelers out there, so check out the link for the trailer and enjoy 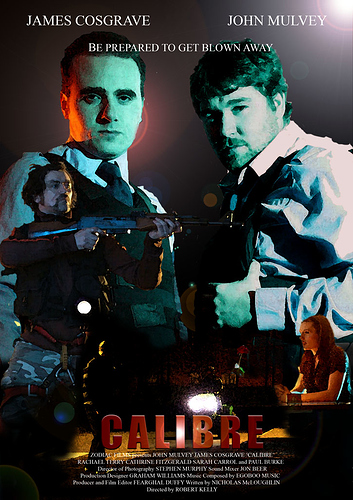 back to the top. Come on spred the love and tell everyone to check it out and leave comments etc

anyone?? would it be something you’d like to see in a feature film??

Yeah , i would be glad if you had Anjelina Jolie with ya !!

And again - come on one of ye must have seen it??

I just watched it. I must have missed it previously due to the large amounts of crap flooding the OT forum, lately. A couple of things:

The first half of the trailer is hard for me to understand. Not in the “what’s going on” sort of way, but the “what the hell did that guy just say” sort of way. It’s probably some combination of the accent and possibly slang. After the bit where the girl says “We’re looking for one executive”, then it starts speaking a language I can understand. Action, violence and metal.

I would like to see the short, tho. Looks like it would be good. I like the staging of the shots, and the effects and overall look of the thing looks like it goes well beyond your typical short. I dunno how much it cost to make this, but assuming this was just a bunch of buddies with a camera and a goal, I’d say that the trailer certainly looks like you used your resources well.

I’ll admit that I have gotten used to hearing Hollywood’s version of gunfire and other such effects, so the more realistic sounding gunshots feel weird. But that’s not really a bad thing at all. Just different.

The bits where you’ve got characters smashing through glass, ducking around from explosions and all of the darkened, silhouetted shots look really pro, like something out of a big-budget production. The cinematography probably helps sell that a lot.

So yeah, this looks a lot better than a lot of the shorts out there. When do you think you’ll be releasing the full thing?

haha, I wish I had the resources to create a movie like that. It looks like you’ve got good actors, a talented director, and something really fantastic to put in a portfolio.

well ta for taking the time to check it out. Yeh the sound mix aint done yet so the efects are (well gunshots) are from the blank rounds fired on the day. The language - or slang is that of the Dublin dialect. My very own. I can understand it reasonably well he hee.

Yeh the fact i had a good DP involved helps but the whole crew were great so they were. We had the effects guys who worked on doomsday on board. The aim was to make something to stand out - with high production values with an aim of pushing the film as a feature some day.

So post is up and running again and hoping to have it screened he end of september - do the festival circuit and promote the idea of a feature film to prospective producers. Ambitious i hear you say? Damn right

I’ve seen it just now… and I defenetly need to see more :yes:
I like it

It makes all the heartache worth while hearing the support

As if. You probably found this video somewhere. No one can make a movie like that, unless they’re a professional.

btw, what is your name, Mr. Professional?

the name is Kelly. Robert Kelly. And well couldn’t cal myself professioal yet as i haven’t been paid to direct yet!! but i’m a professional grip - so it works out nicely - sometimes

hey if ye think its hard to understand these accents then i’d hate to see you come out of rock n rolla the english ganster film!! Now thats een tough for me to undersatnd at times gov

Good stuff my friend. Its good that we all have our dialects in anywyas - makes people more interesting when you first meet them

But yeh I directed it - at a cost of say 20,000 and still counting. But its a gamble I have to take - hopefully it pays off. Damn could have done it all in Blender for free!!! aaarrrrgggghhhhh