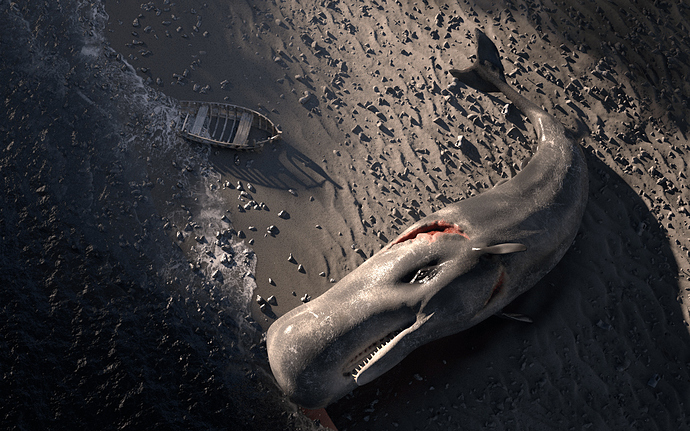 So uhm, not much to say about this one. Had to mess around with the lights a lot and still I’m not convinced. Anyway, after staring at it for way too long, I decided to call it quits and so this is the finished scene.
Oh and by all means, all critiques are most welcome.

I think scene needs some object from where you can really pick the scale of the things. Somehow I feel like those rocks are too big and its really hard to figure how big the whale is.

I am not either sure if the angle / fov for camera is best possible. Maybe there should also be more empty space around the whale?

You are right. I did put some random junk around it like plastic bottles and such, it doesn’t really show up much though. And the rocks may indeed be too big (even though it just depends on the type of beach).
Thanks for the critiques.

Really great image, SubjectNameHere! I think it’s a beautiful yet sad image; beautiful in it’s lighting, materials and composition, and sad in the subject it contains. I think this overhead view is very fitting, as the bird’s eye view or “God view” allows us a type of disconnect from the scene, and this simple distancing and larger overview of the whole scene has a psychological effect on how we interpret the image. I don’t think you could easily achieve the same effect if the camera was lower; not to mention it would become much more difficult to see the eye of the whale, which adds a lot to the image.

Also, I would normally agree with the need to add some objects to help with the sense of scale. Because of the title you’ve given the piece, though, I’ve just automatically viewed it as an enormous, adult whale.

Great work, again. I’ve a question: What did you use to achieve the shadows along the left and top sides of the frame? Is it just a single mesh to block light? It’s a simple touch, but really effective at highlighting the area of interest.

Well thank you. Glad you liked it!
As for the shadows yes, it’s just a plane with an alpha texture I painted, which I then positioned appropriately.

Very nice! I agree about the rocks but overall a very beautiful scene!

Woww… this is real piece of Art! Congratulation for it!
I’m waiting the update after the comments

I like the transition between dry and wet sand, and the foam is great too!

This is wonderful, yet saddening. But overall such beautiful work

Thanks everyone!
I’m trying to fix the scale problems. Unfortunately, these take time to render (i’m stuck with the cpu because of the volumetrics) so it’ll have to wait for a bit.

That foam is really great!!!

The only thing that looks a bit odd, is the light size. It’s too big, and it takes away the size of the spermwhale.
In this thread, the OP had a similar problem… you can check it out.

I think for a more “cinematic” effect, a zoomed out shot would work well (I feel in a movie they’d likely have a close up zoom out to a far shot with some rotation. Or maybe that’s just what I would do, haha).

looks awesome. I think the boat itself serves as the scale of things. Love the water and sand…the transitions from wet to dry. LOve the lighting too… suggests perhaps an early sunrise or a sunset maybe thus casting those awesome shadows.

I still feel that those rocks dont really fit in the scene, guess theres too much of them or they are too sharp or something. Tried googling for an image with stones like yours but couldnt find it either.

My first instinct was to use the boat for scale. I like the story this tells. Cool.