Can I use blender to map 360° projection in a cylinder?

I’m looking for software to manage 4 projecters to project a 360° photo onto a 360° cylindrical screen. These are equirectangular photos built out of vintage panoramic photos from archives.

I’m working on something similar, but in reverse (printing deformed images onto geometry, that should look correct from certain vantage points.) My understanding is that this is basically the opposite of video projection.

Here’s one workflow I’ve just had success with: Perspective Transforms for IRL Video Projectors, and Physical Shadow/Perspective Art - #3 by KiwiKid

You’ll need to set up a camera in the blender scene at each of the places you’ll have a projector, and render out for each.

For really accurate mapping you’ll need to do it all again, with the blender cameras tweaked to match the actual physical projectors lens characteristics. FSpy is the way to go. Outline of the process: https://blender.stackexchange.com/questions/142837/is-it-possible-to-do-projection-mapping-with-blender. More detailed description linked there using blam: https://github.com/stuffmatic/blam/wiki/Video-Projector-Calibration. CGMatter has some good videos on FSPY (but using it to project camera pics onto geometry recreated in blender.)

Some other options that may be useful: VPT8, ofxPiMapper, mapmap. Also helpful - http://projection-mapping.org.

Thanks Julian. Are you doing something like the Ames Room, except on paper?

Your links were helpful to understand how to use blender to map onto flat surfaces. I am working on an exhibition of “Vintage 360° Photography” (vintage360.ca). I.e. 360° (horizontal) images built from old photos in archives, or finding the same created by others.

I have built a (real not virtual) portable, lightweight, DIY circular frame and screen for 360° video projection. I hope a photo appears after the end of this sentence. 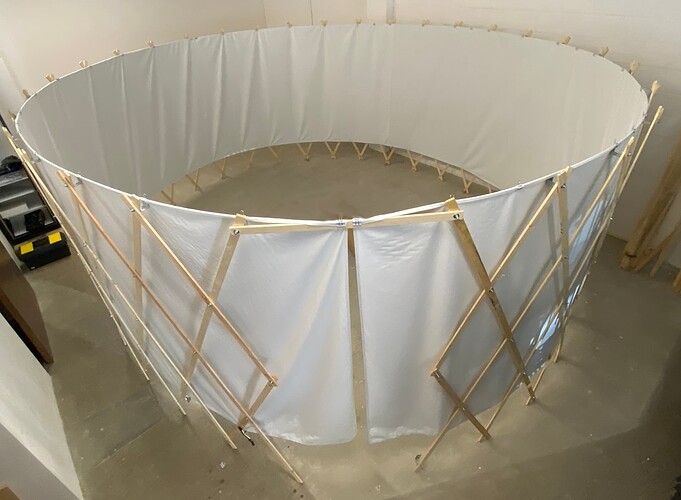 I need to map an equirectangular image through four projectors onto the curved screen to create the 360° exhibit.

Ames room - didn’t know that’s what that construction is called.

The links I sent can be used on non flat surfaces too. I used the process I described to print onto the outside of a cylinder, and in blender it’s been working on arbitrary shapes.

I am in no way an expert on this, but I suspect that if you have square photos shot from a tripod and are projecting them onto the screen you have pictured, it’s not technically equirectangular. I think that’s for projecting onto a sphere. But maybe at that scale it won’t be noticeable?

If you go the blender route and calibrate everything, you’ll be making a custom transform that matches your setup. OTOH that might make it more sensitive to any bumps or other movement of the projectors or screens.

For doing square → equrectangular (inverse) and equirectangular → square transforms, there’s the “small world” and pano tools in Gimp. I’ve only used them briefly this week and found it very finicky to get things looking sort of right. (But I was trying to make a square appear as a square when projected on a sphere…)

For lots of spherical projections for globe making, NASA has a free tool called GProjector.

I’ve been using KRPano for years to display 360 degree images in virtual tours on computers and mobile devices and I’m sure it would be suitable for your project. Try the free version (just adds a watermark) and take a look at the forums for different projections. I’ve seen previous forum posts where the image has been projected in either full or partial 360 onto structures like in your picture.

I’ve a large project on the go at the moment in Blender of school buildings and it’s grounds and when finished adding the materials it’ll have about 20 X 360 degree renders for a tour and high res for VR headsets also. Great fun making it.

KRPano looks great but I think it is for showing panoramic images on the web.