can this SSS gltich be remedied? 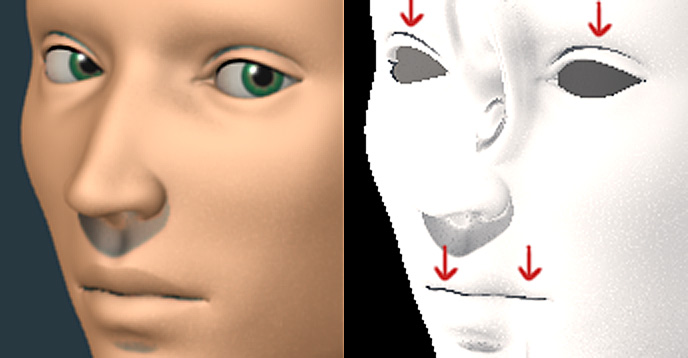 In developing a skin material for my latest project, I’ve found a problem that stems from using SSS. Note the roughness of shadows at the creases in the eyelids and at the meeting between the lips. This correspond exactly to the highly aliased shadows of the “pre-render” that SSS does (right image). No SSS settings affect this, nor does jacking up the OSA (from 5 to 11). Any suggestions from more experienced materialists?

BTW, image is upsampled at 2X to make the glitch more visible, so it’s not as sharp as a 1st-gen render.

Did you recalculated normals outside?
Ctrl+N, and then re-apply the SSS.
Maybe that helps (save a backup copy to be sure though (of the current file)).

soft area light above those areas will mimic ambient lighting.

A photo reference using the same lighting will help guide you as to how dark the creases should be.

Chevy’Dude - Tried the normals recalc, no effect, but thanks for the suggestion.

New images, after some minor remodeling:

This series is a 2X zoom, making the blotchiness easier to see, same order as above.

PapaSmurf – As the new images show, it’s not the lighting, it’s the SSS – for some reason, the shadowed creases are not smoothed (AA’d) as the other mesh surface areas seem to be, almost as if the SSS calculation breaks down in these areas for some reason. Or maybe it’s a contrast issue (dark shadows near brighter tones)? Darkness of the shadows is no problem, but rather the blotchy roughness they show, which correspond to the jaggy crease shadows of the SSS “pre-render” (see the zoomed image series).

Obviously this is a problem stemming from the SSS. I was hoping it had been encountered and that there was some settings adjustment that could fix it.

I’ve managed to not solve the problem but to at least knock it back to near invisibility. By heavily reducing the Energy of the Area Lamp casting the shadows, the contrast between the crease shadows and the rest of the surface was greatly reduced, which makes the lack of AA in the SSS pass much less noticeable. It also reduced the depth of the cast shadows, however, so it’s a tradeoff.

Whatever that initial pass made when using SSS happens to be, it needs to be anti-aliased to really fix the issue. That would add more time to an already lengthy rendering process, so maybe making it an option would be the way to go.