Hi guys! A little work done on x-mas holiday.
I found this reuse idea on the web and remade it in blender, render in luxrender pathocl integrator,flame is post-pro. 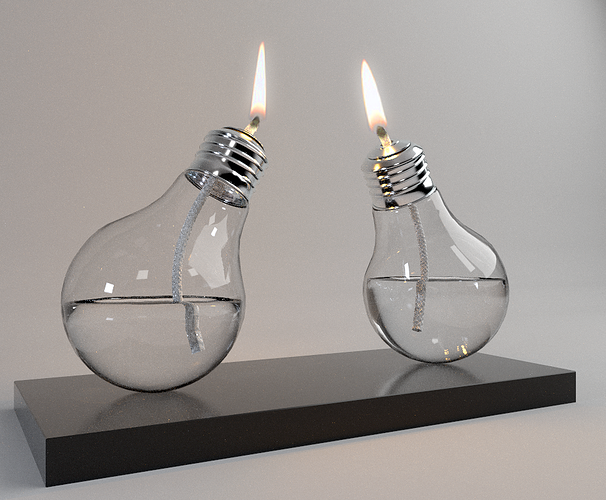 very well done! perhaps the glass is a bit thick for being bulbs. But it’s probably safer to have thicker glass on that type of bulb

You picked the perfect IOR for the sort of… “fatty” liquid used in this type of candles!

edit: i get a bit nervous about them not having a flat bottom

i guess the house is burning in the next frame?

Haha Sakrecoer! I go to model&render a fire extinguisher!!
Liquid is a transparent alcool ior= 1,35

Nice idea indeed, and well done on the render! I agree very risky with round bottoms on a tiny ledge. It should at least have a very tiny base to sit in. If alcohol is the fuel then there should be more blue to the flame, no? Maybe with alcohol it wouldn’t be as bad if they fell and broke while lit. One poof and it would probably burn itself out rather quickly before doing much damage. Would be much more risky if the fuel was oil based. Am I reading too much into this- lol

Thank’s guys! In the original image, on the bottom of the bulb there is a little bit of glue!
This bulb has a double utility: first is lighting, second is…molotov:eek:!!!

This is awesome. I love the concept and i can hardly find a thing wrong with the quality of work.

Haha Sakrecoer! I go to model&render a fire extinguisher!!
Liquid is a transparent alcool ior= 1,35

Interesting fact about the IOR of alcool! I don’t know why i get this “fatty” feel… perhaps the glass thickness? I think it’s very well done however!