I installed many addon, but sometime some addon cause me problem.
Recently I would try to add a new addon, bevel curve tool, but, after installed it, I cannot use it, whatever the scene is, I receveid this message:
[ATTACH=CONFIG]423225[/ATTACH]

Another problem with addon is some missing addon, in particular UVsquares, on console I found missing some addon, UVsquares and another one, tessellate numpy. I found the first one, download it and install it, but after install it not appear into my addon list, and the problem persist 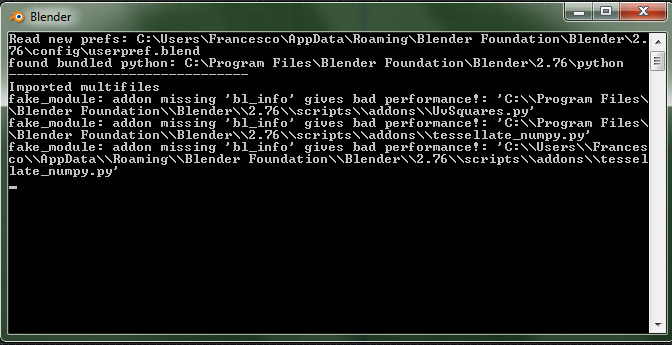 The other one missed, tessellate_numpy, don’t know what is…

Any idea about? Thanks in advance.

I unzipped the file in the “2.76\scripts\addons” folder. It showed up in
Prefs>Addons.

Did you see this video tutorialon it?

Sorry, I don’t understand about the UV squares or tesselate numpy.

You can ignore “Missing ‘bl_info’” messages. It’s just a warning.
tessellate_numpy.py is one module of Alessandro Zomparelli Tissue script which if you download tissue_master.zip from git can be installed from downloaded zip directly by Install from File in User Preferences-Addons. After you have installed Tissue it’s available on separate toolshelf tab. Enable it in User Preferences by searching ‘Tissue’ and checkmarking.
If UVsquares is installed (using same Install button in User Preferences) you find it in list by searching ‘uv’. Enable addon and look in UVEditor UV menu for a new options.

Having a similar problem. I can not install new addons. I have tried install from file on the .zip file and I have tried unzipping the file and moving the folder to my addons folder. Either way the addon does not show up in my add on manager. My console error is:
fake_module: addon missing ‘bl_info’ gives bad performance!: (userpathertoaddons) \conf.py’