Can't delete some part of an object

I have no idea what the hell this thing is, but whatever it is, I can’t move it or delete it. If I try to rotate the model by it’s center, it’s half way between this point and my object. I tried moving the object’s geometry alone in edit mode and move it directly to the point, but then the model moves to some random spot when I try to animate it. Then, when I press undo, the last action is undone, but with the object in that same random place so I have to move it back my self! I’d google this if I knew what it was called or at least what it does! 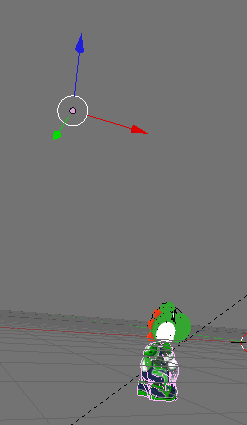 That is the transform widget attached to your object center. to fix it, select the object and hit the ‘center new’ button in edit buttons.