Someone on StackExchange asked if it was possible to place compositing elements in the 3D view and combine them with other composited stuff. They wanted to do the keying in the 3D view ideally.

What they were really asking for isn’t just pre-keyed 2D elements on planes (easy), but the ability to change (add effects to) the 2D elements while interacting with spatial orientation.

So I tried using UV passes from planes in a 3D scene (as well as simple mask geometry) to scale and move the chromakeyed video around. 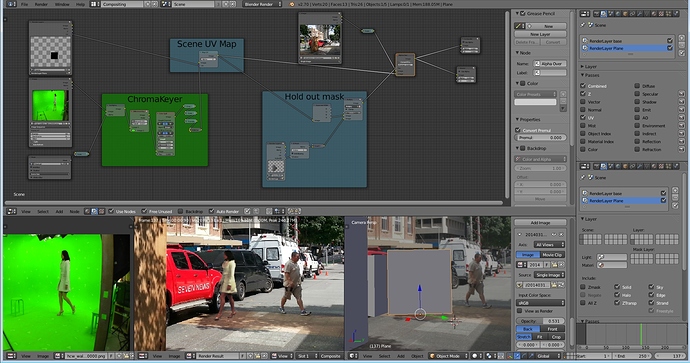 I used the BLAM addon to scale and orient my camera to a still shot. Then I unwrapped and rendered the plane’s UV co-ords for use in the compositor.

I grabbed some sample chromakey image sequence from http://www.hollywoodcamerawork.us/greenscreenplates.html and did a very bad key. Then distorted it with the Map UV node.

Biggest problem was using non-standard frame sizes then trying to make the uniform. As Blender’s scale and crop is not very intuitive.