Taking a break from my many unfinished projects to work on some characters. This is Hugh, an inventor who lives in the house from my Cartoonish Landscape thread with three robots that I will hopefully be making next.

Clearly this isn’t complete but I need some advice on doing cartoon hair. I have no clue. 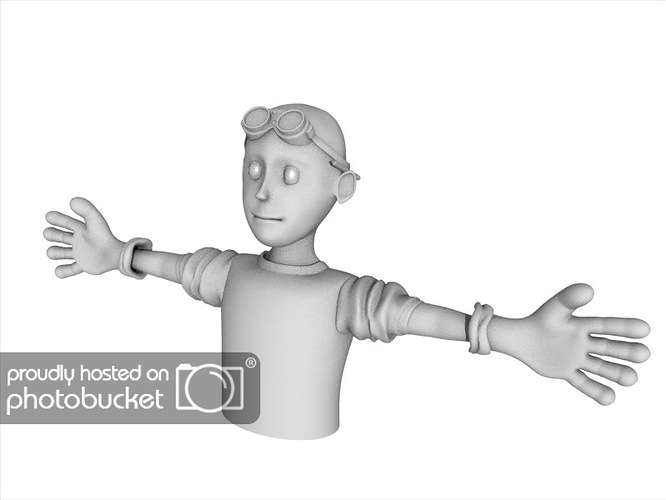 I think a manga style haircut would do. This requires modeling the hair out. It should have a “solid” style look. I wouldnt use particles in my opinion.

my advice on cartoon hair? cheat! a hat would work with this character, with a few wisps of sideburns showing. or you could go with the card method and make some stylized messy hair, standing on end. once you have made and placed the first clump, it gets easier. ( remember to apply mapping to it before you start duplicating it. separating the pieces later for texturing is tedious )

i have been working with similar concepts, simplifying characters to try and achieve a somewhat sculptural look. reducing detail is hard work.

one thing that stands out for this character is the thumbs. position, volume and shape all look a bit off. maybe because i have been wrestling with that too. i ended up building mine aligned with the hand, to keep proportions accurate, then moved it with the armature, after it was rigged, to get it into position.

This might sound a little weird, but I was seeing a solid model of a sort of exaggerated blonde Conan O’Brian haircut. You could get some nice bouncing effects if you’re going to be animating this with the 2.40 also.

An update, avoiding the issue of hair once again for the time being. I think I am going to want to go with solid hair rather than cards because it would fit better with the style of the whole scene, but at the same time I want to avoid the anime/manga style for the same reason. I had thought of the hat but I just can’t see Hugh wearing a hat all the time so I need to think of something. The next update should contain some attempt at it.

(The making of Bunny)
http://features.cgsociety.org/story_custom.php?story_id=2850&page=

I quite like the simple, cartoony approach to the hair. I don’t know how it’s textured but I guess UV would do it

great work man. i think that the gloves look like scrunchies because there are no creases in the hand.

does this make scence?

Very nice Character. I like it.
As for the haircut: your character reminded me a bit of “tintin” the comic book hero drawed by Hervé. A haircut like his would certainly look nice wouldn’t it?

Tintin or Tin Tin may refer to:

Thanks for the posts, and especially for the links AndyD. I had completely forgotten about AndyH’s spectacular work. I am trying to work on using his method for hair at the moment but until then I have made several updates.

I added the coat because I thought he was starting to look more like a construction worker than an inventor. I took off the gloves and added shoes as well.

A hairstyle such as that would indeed fit this character well, even keeping the yellow blonde.

The hands do seem a bit big even for cartoon hands, and the very wrinkled shoulders compared to the smooth coat seems weird.

the wrinkles in the sleeves are it being shoved up off the forarms, makes perfect sense. The coat has yet to be textured. I think this model is looking great, not much to critique at this point, can’t wait to see it more finished with materials and textures. Keep up the great work.

Great work, but, the sleeves look unattacked to the coat, maby you could add some wrinkles in the coat too?

Super job modelling! One thing that stands out to me is that the coat seems to be floating around the character instead of hanging on him.

As I said before. Awesome Model

whats wrong with being bald ? im bald…and i look cool. i think bald people get way to much bad rap…

Super job modelling! One thing that stands out to me is that the coat seems to be floating around the character instead of hanging on him.

I see what you mean, right now the coat kind of extends over a tool belt that he is wearing, but I think I will remove that so the coat hangs more naturaly.

I also do need to wrinkle the coat up a bit to make it fit with the sleeves.

As for the shoes and the hand size I want them to be noticably large because the character is meant to appear young, though I have no specific age for him I would go as far as to say that he is a kid.

whats wrong with being bald ? im bald…and i look cool. i think bald people get way to much bad rap…

I couldn’t agree more, but being a kid I think bald would be odd.

Aww… maybe I could model you some hair after I finish Hugh’s.

Aww… maybe I could model you some hair after I finish Hugh’s.

but yes. to keep this comment from being deleted…here’s my 2 cents on your wanting the hair to NOT look like anime:

there’s differen’t ways to make “solid” hair actually. anime isint the only type of art that has that kinda hair…in fact the way alot of cartoons are made is with a big block of hair with a few detailed bits on the edges. look at Calvins hair for instance from the Calvin and Hobbes comics.