here’s something i came up with while goofing off at work (hey, i had some down time. so sue me ;)). it’s loosely based on the aliens from “destroy all humans” and the “mars attacks” aliens. okay, maybe not so much the “mars attacks”, not in looks anyway. i think he might have the same type of attitude: curious and mischievously destructive.

i want to clothe him in either a diaper or a pair of tighty-whities. what do you guys think would be funnier?

also, i think i’ll make his feet a little shorter, that is, make the ankles go closer to the ground. 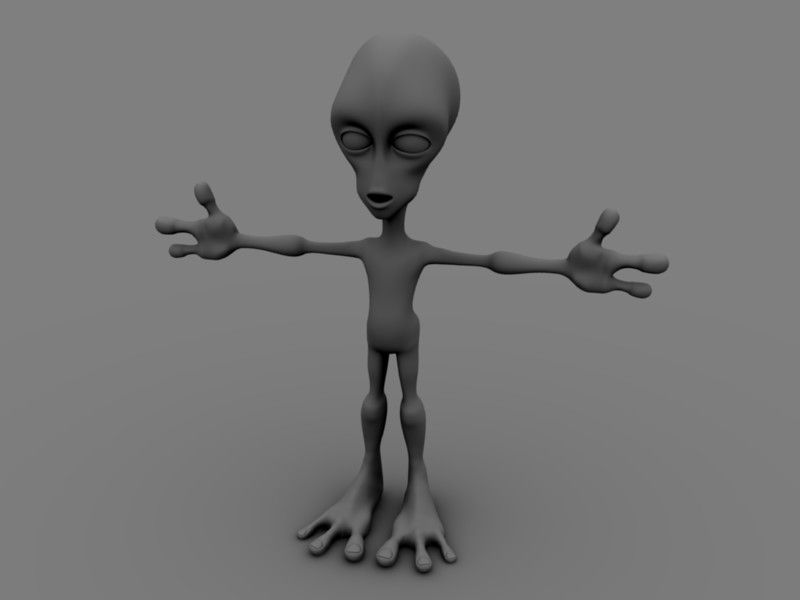 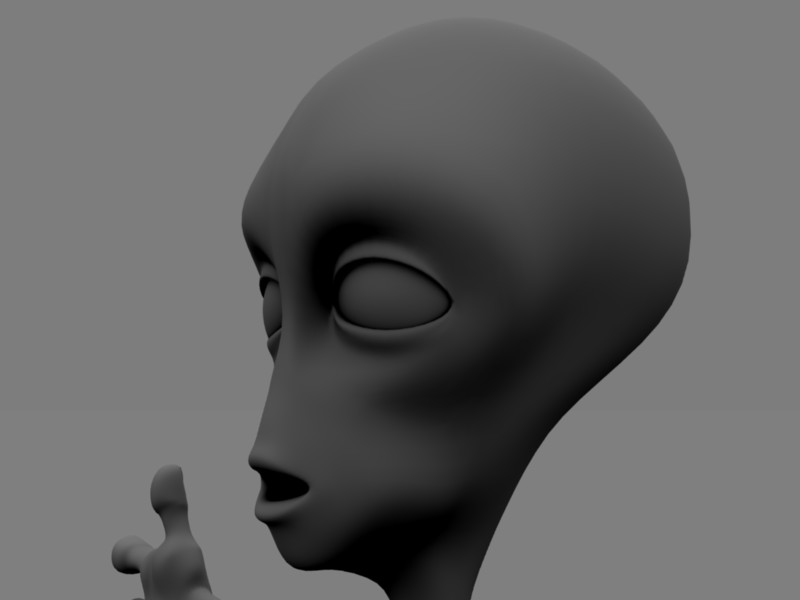 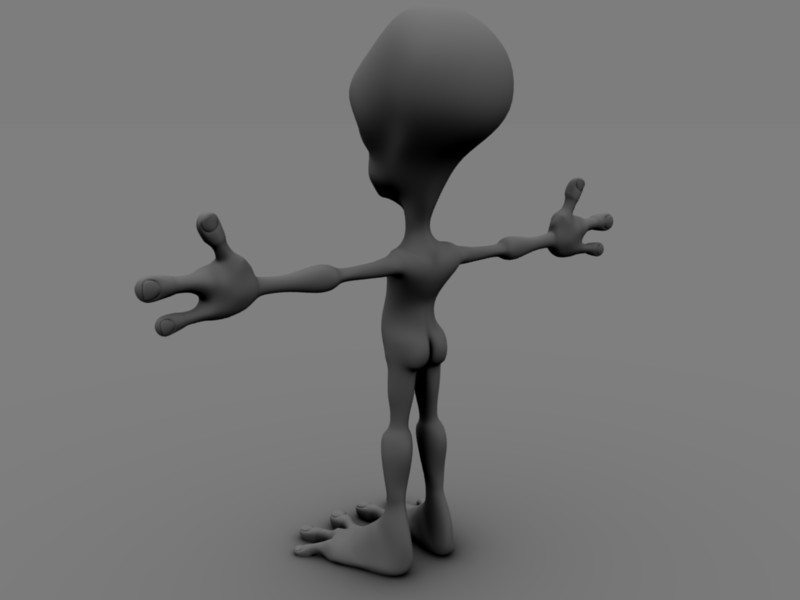 i think whitty tightys would be best

i think whitty tightys would be best

i was hoping you’d say that

i didn’t really want to do the diaper anyway. i didn’t want to give him a “baby” look, i wanted to give him the “funny monkey with a diaper on” look. but i think the baby look would’ve been what most people would’ve seen. so yeah, fruit of the loom it is

HAHAHAHAHAHA!!! if you only knew how long it took me to get that butt to look right…

Looking good ward! Lots of detail already. Yea the feet do look a little big but still not too bad. Great start man!

some tweaks here and there; mostly the hands/wrists are a bit bigger, and the feet are much smaller. also gave him the draw’s. i dunno… i almost think he looks better nekkid…

what do you guys think? 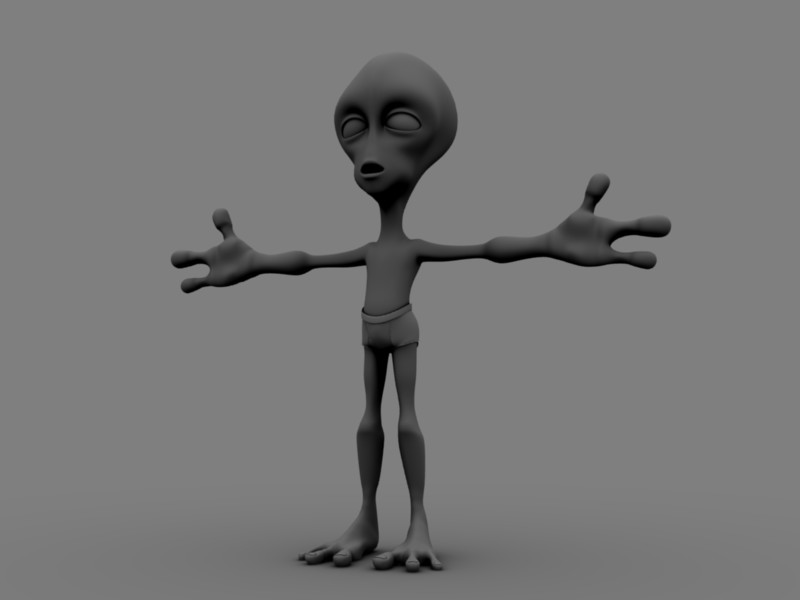 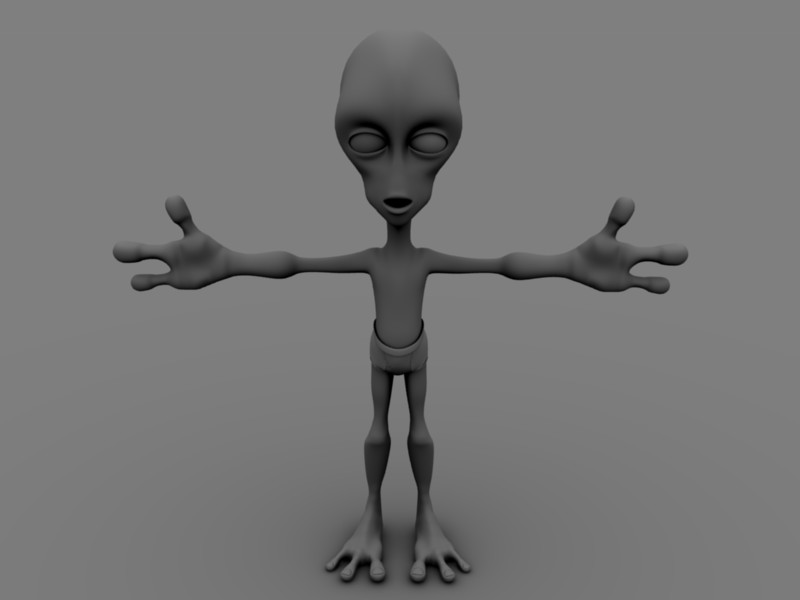 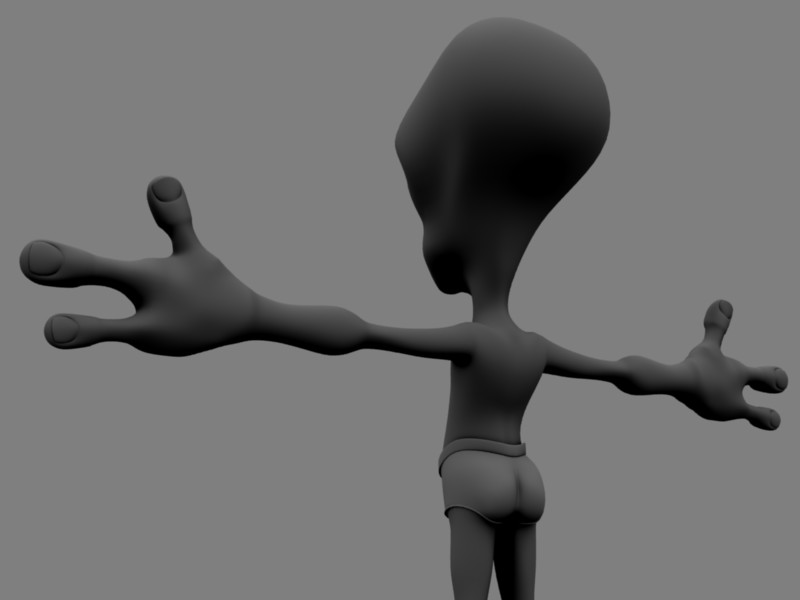 also…did you make the body 1st? or the head then extruded the neck down and modeled it from there…

Heh that’s pretty cool! I was also going for the white briefs. Now all you need is a drunk expression on his face…

Heh that’s pretty cool! I was also going for the white briefs. Now all you need is a drunk expression on his face…

you could do a drunk alien in his “Dirt” undies… with a beer in his hand and a cigar in the other…and in the backround you could have a a huge t.v and have like ESPN or some sport on…(make it a sport no one watches like stick ball…or idk some random sport)…that could be funny!..are you going to make a short?

I think you should pull his tightys down a bit, not much, but it would add to the what am I doing here and why am I sporting white cotton?

@lilgrudgeboy: yeah i modeled his head first. the AO is putting a darker than normal shadow down his crack there, that’s the wedgy. i don’t think it’ll look like that when it’s lit with spots.

that’s a funny idea, maybe give him some beard stubble too…

i don’t have a story idea yet, but i want to pair him up with my other cartoony character (the one in my avatar, featured HERE).

@viqous: yeah i’ll probably make them hang a little more loosely, and put some wrinkles/folds in there too. might even turn them into underoos or something

Personally, I’d cloth him in something that resembles a hemp-like rucksack. But this looks great. I love the look and feel. Keep it up.

bigglesworth loving your idea too…maybe he could be a stoner!! (not say that hemp stuff is stoner clothes!! i love hemp! lol)

for an idea with both of them…maybe your avatar and him could be room mates…and your avatar could be like a freak like Monk(the show on TBS) like a clean freak and the alien(ima call him STEVE untill you get a name…that just sells it) is a like me! doesnt clean up at all and is really lazy…plays games all day…ok nvm not like me…like my step dad.

but idk its up to you!

I like him very much! Nice mix between cartoon stylish look and realistic appearance (if realistic is possible for aliens).

Personally, I’d cloth him in something that resembles a hemp-like rucksack. But this looks great. I love the look and feel. Keep it up.

or do you mean something like dobby on harry potter, just a pillow-case type of thing with holes for arms and legs? or do you mean just a back-pack rucksack?

@lilgrudgeboy: you know, that’s almost the same idea i had. heh, “steve” makes me think of the alien on “american dad.”

i have a lot of steves in my life. my dad, my brother, and my brother-in-law :spin: what’s one more? :rolleyes:

dave wakes up and hears something in the kitchen. he gets up to investigate. looking around, he sees that a box of cereal has been overturned, and is spilled all over the floor with footprints through it. he follows the footprints into the living room, where the lights are off, but the tv is on, the sound muted. he slowly looks around the room, and then stops, and screams in terror. camera flips around and we see “steve” sitting there, eating a bowl of cereal on the couch.

DAVE: you spilled milk on the couch!!!

haha!!! thats really funny!!! i was thinkin the samething about the American dad alien…is his name steve in the show???if it is…ill come up with a more original name =) lol

i think a rucksack is a backpack?..but i could be wrong

the alien on american dad is “roger.” steve is the name of the son.

added a few more details: tweaked his face, made the head a little smaller, added ears. bent the fingers a bit, adjusted the spacing and placement of the toes. made the underwear bigger and baggier. 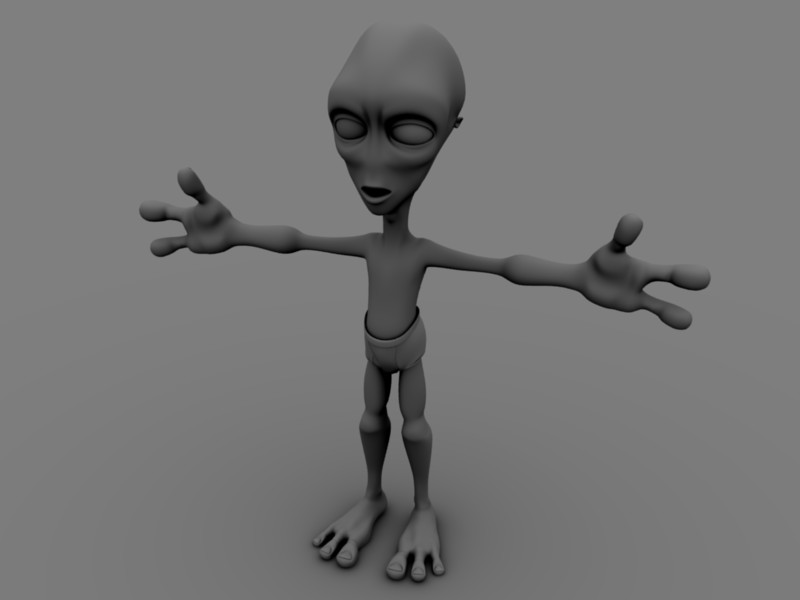 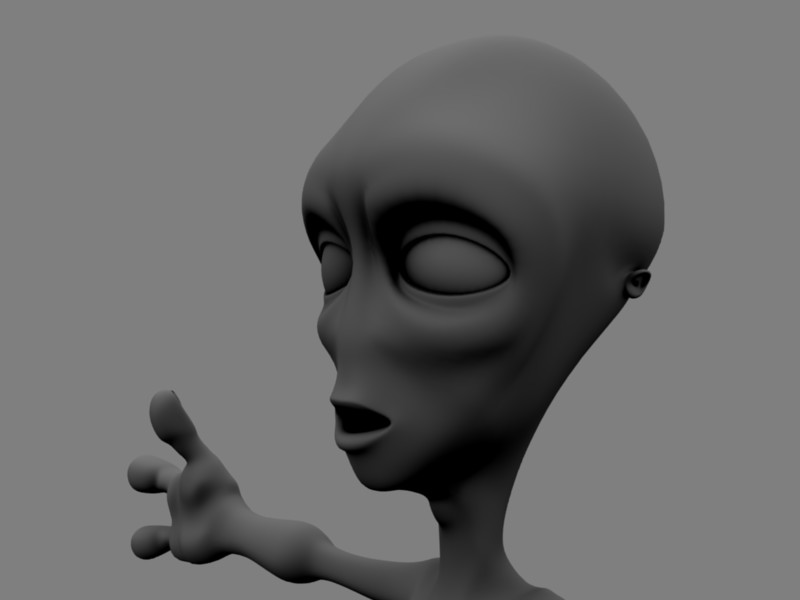 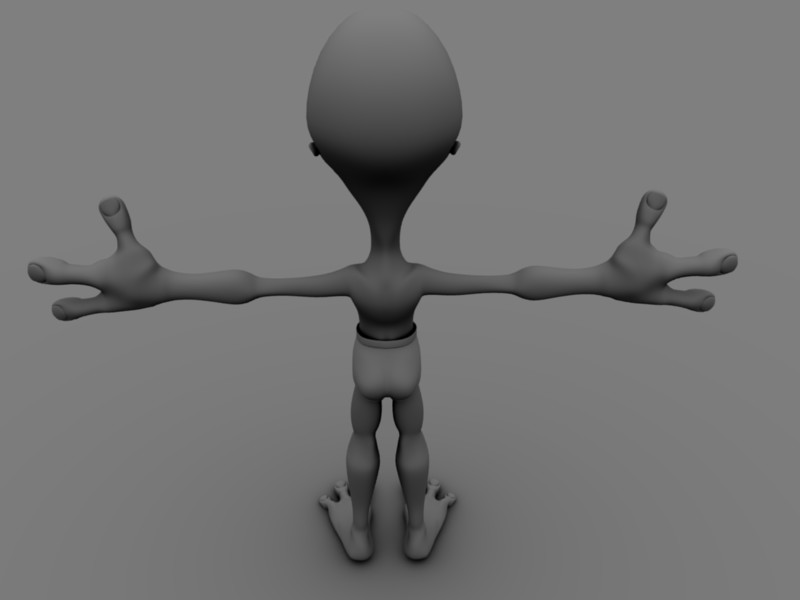 Looking good ward! Can’t wait to see the texture job on this one!

well, since he has ears now, i might as well give him a nose too. also made the legs shorter, and the body a little more bean-shaped. give his eyes some irises/pupils (or i will when i start texturing). next up is the oral cavity (teeth, gums, tongue). 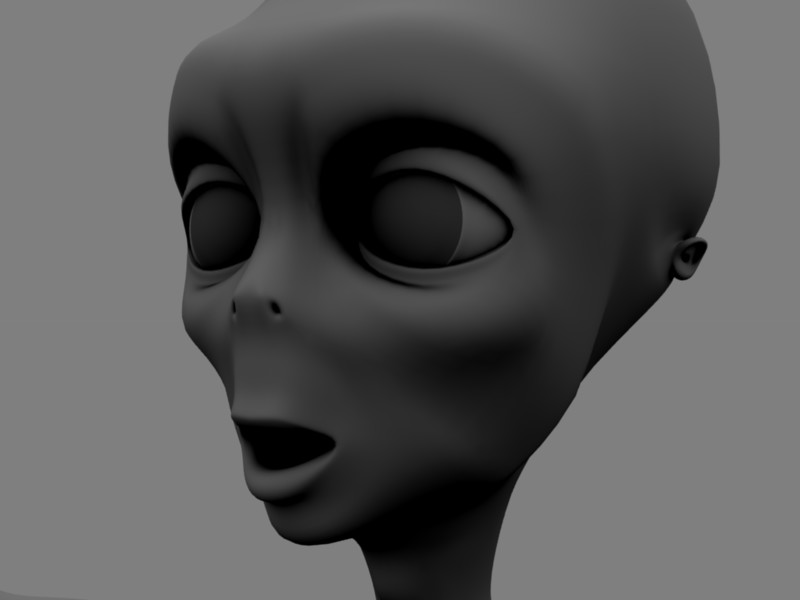 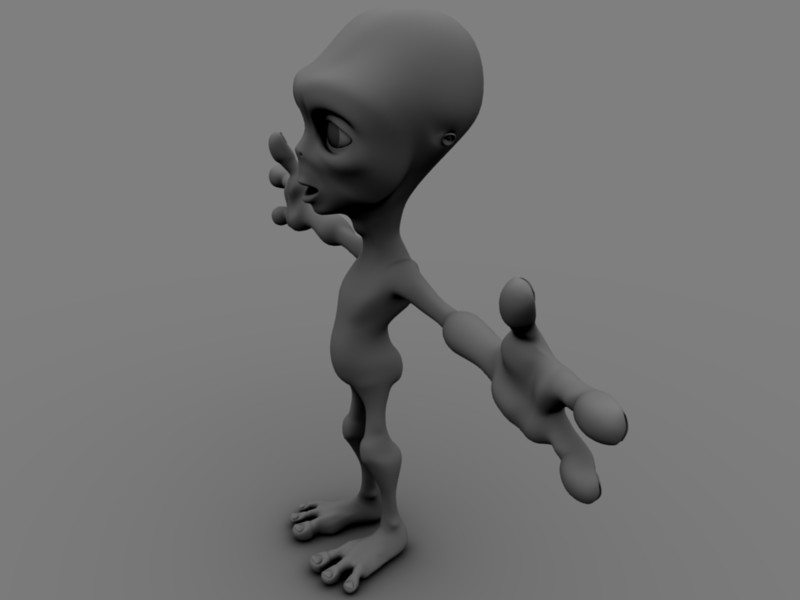 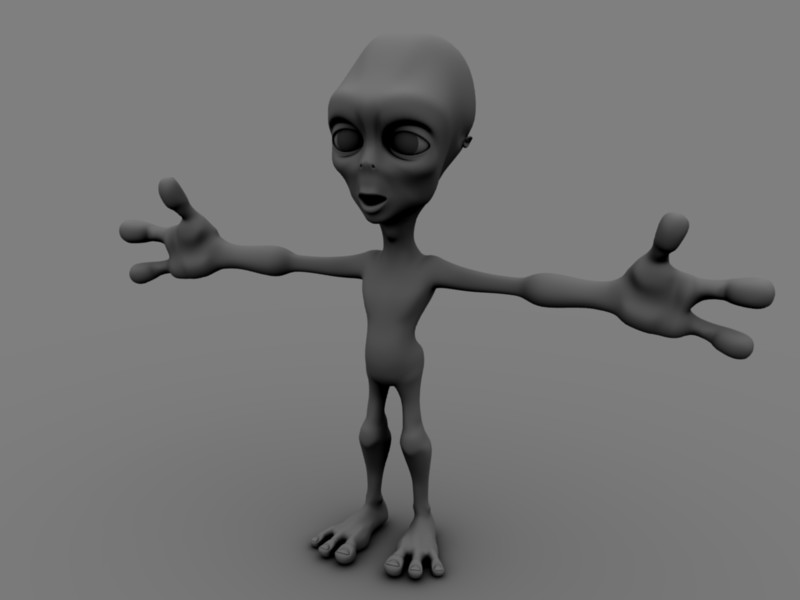