wow!, Nice work. But the castle looks like it is under water. I think it because the background is blue at the horizon, and gets white further up. Normally it would be the other way around.

but WOW, how did you do the landscape?

The castle looks to perfect to me. no chips or bumps on the walls.

Landscape is amazing, maybe make the a landscape in the background too?

Nice mesh, but I must question the texturing. Looks like a lot of work in the making, but the texture seems a bit weird.

I like the mood and the color, but this almost looks like it is actually inside of a fish tank full of water and this is a good thing in my opinion.

Basically, this is a nice project. I’d change the texture.

Indeed, it does really look like it’s underwater(which I also think is a good thing

). But be worth it to add some fish and bubbles and the like and maybe some light relfecting from the surface to enhance that effect.

Nice.
How did you add the grass-thing? Is it particle?

Very good, but what’s with the stripes in the grass?

Here is the original render. You can see the ugly backdrop wich i just blurred in PS. After blurring it looked kinda misty and moody, never realized it looks underwater until now

Texturing
Castle texture is half marble procedural / half Stone image. Stone-image texture is projected to the wall with Reflection vector. Texturing was very fast and easy to achieve but wont work with animation.

Landscape is hand modelled and covered with Ripsting´s Famous Fibers or Beast? %| …Cant remember cause this was actually rendered like a year ago. Never wanted to show it in public cause of the ugly backround. And becouse the inspiration for this was obwiously Kurka´s magnificent Castle Estel. I admit this is cheap imitation

Very good, but what’s with the stripes in the grass?

uhm, i dont know what U mean

Well, if you take a look at the grass in the lower left corner, there’s black diagonal, stripes in the grass. 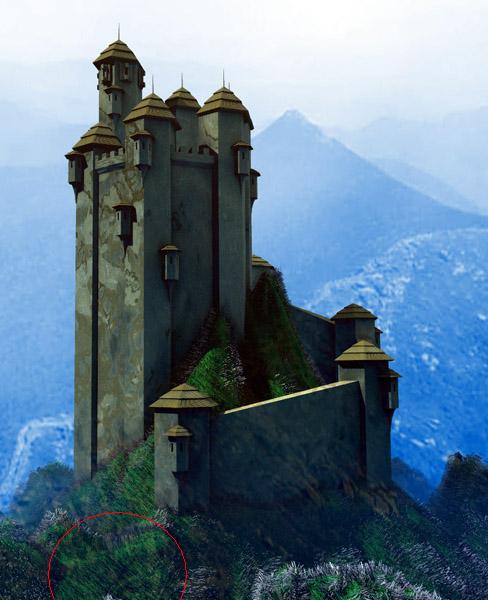 Aah u mean the shadows

beautiful! I love the way the hills collide with the castle itself.

The castle seems a bit undetailed though, and the sharp edges makes it look like a castle you would find in one of those popup books. Edges resemble well creased cardboard or paper…

one thing is that maybe that texture isnt the best for the castle wall? it looks a bit big- maybe if it was smaller- or a block texture…? yea just me i guess

On the one that looks underwater it might be cool to add some fish and bubbles to actually make it underwater.