Starting a new project of a cathedral interior. This will give me a change to experiment with god rays shining thru stained glass windows. I am using the national cathedral in Washington DC as a guide. Here are a few images of what I have so far for the bottom and mid level arches running along the side of the nave. 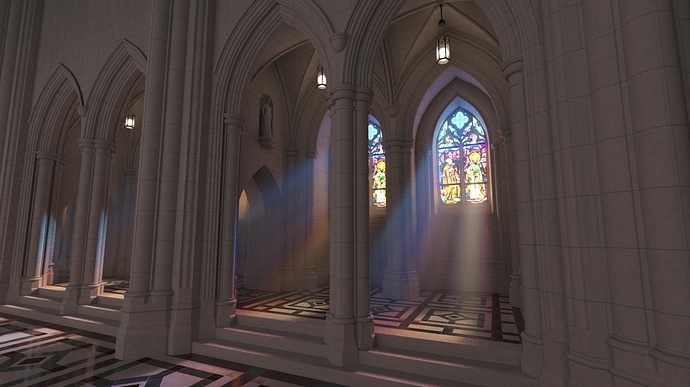 Done a lot of work on this in the last couple of months. The bottom level arch I posted before was completely redone. Not all repeating parts have been put in place yet as can be seen in the render. I am stuck at the small hallway that would be behind the double arches seen in the middle of the render. Need to take a field trip to the actual cathedral for some reference photos. 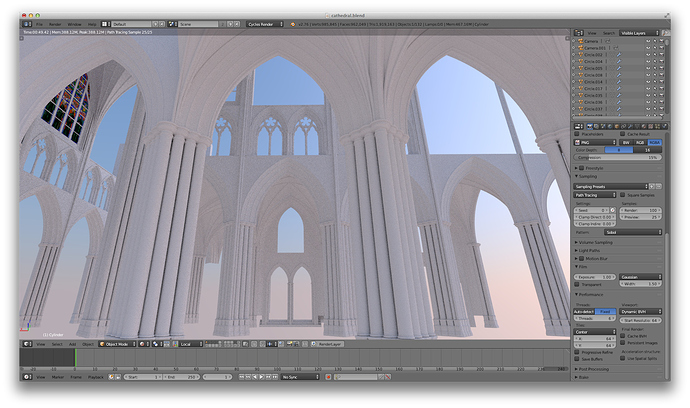 looking nice
but how many verts ?

hi, can you show a wireframe view of the arches?

ideorium - not sure if you mean lower or mid level arches, so here is a wire of the lower. Of course now that I have been there recently and seen what they really look like I will probably redo these arches. The real thing is way more complex than what I have done here. 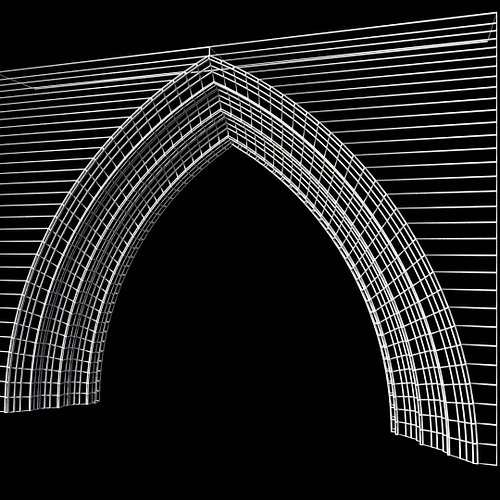 Been working on one of the rose windows. Here is what I have so far. 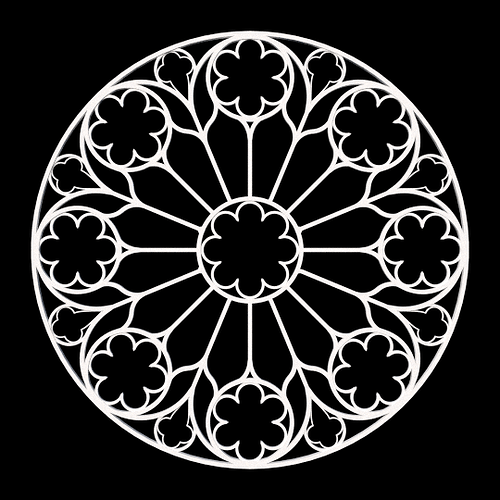 OK, so I have completely restarted this project. After going to the real cathedral and taking a bunch of photos, I realized I was really far off. Even though I am not out to do a 100% replica, I want to get close. My original model was off in scale and had some simplistic details. Also I have decided to concentrate on a much smaller section, just one of the side hallways. The hallway alone has a lot of detail and I want to get in close to show it, rather than try a grand far away shot.

I have finished about 90-95% of the modeling now. Some finer details are left at this point. So I am moving on to the lighting. Does anyone have any suggestions for lighting? I have never done an interior scene like this. Right now I have a directional light shining through the windows. Then 2 sphere lights int the room, about 25% down from the ceiling. Finally a area light shining on the front to light the columns. I don’t intend to keep that setup, was just looking for something to show off the model for now.

I also plan to make a copy of the entire model as I have it and place the copy on the left side of the image, forming more of the hallway. The image will extend more to the left to get a 1920x1080 ratio. 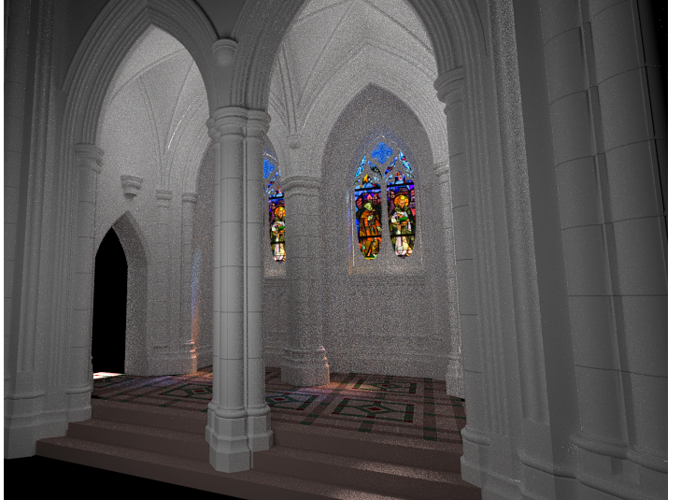 Think I got a good lighting setup going now.

The whole scene is inside a large box with global illumination tuened on.
Directional light shining through the windows to cast light on the floor
Each window pane is an emitter to light up the window frames
Two point lights where the light fixtures hanging from the domes will go
A large off camera texture acting as another emitter, simulating the stained glass window that is above the arches in the scene. This light bounces off the enclosing box and lights up the pillars in the front.

The 2 black squares visible near the roof are placeholders for the light fixtures I have yet to model. He’s almost at a million with the model. 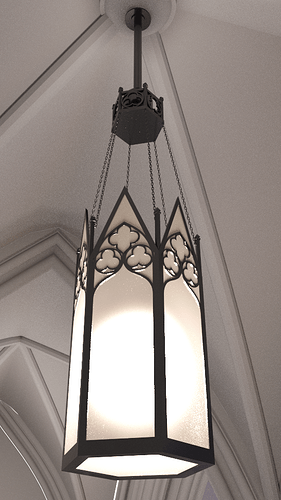 Model for the ceiling lights.

Here is what I’ve got. Unless anyone has any advice for me on how to improve it, I’m am calling this one done.

I added the guy on the ladder because I wanted to get a human touch in the scene so that it wasn’t just an empty hallway. The guy working on the statue was the first idea I had. 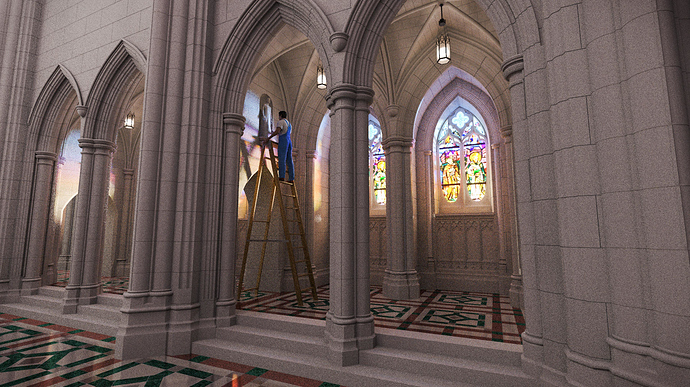 This is looking great! i would work on the characters pose though, his stance on the ladder seems a little un-natural, Maybe have one leg on a higher step to the other? and/or have his back leaning slightly towards the wall, so it looks like he’s balancing his weight

Decided I didn’t really like the guy on the ladder too much. So got rid of him and added sunstreaks coming in the windows. Also updated the materials and lowered the light level to draw more attention to the windows.

A final fix to the compositor to correct a lighting issue and some post processing. 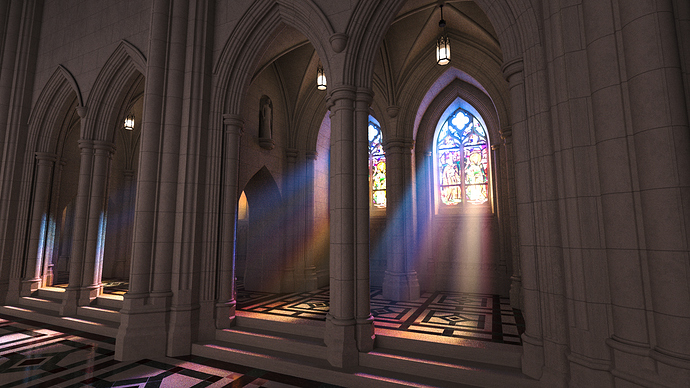 Save me! I have to ask for help! How did you do it? Stained glass with reflection… Take a hint please! I ask you.

Save me! I have to ask for help! How did you do it? Stained glass with reflection… Take a hint please! I ask you.

Hey sorry for the late reply. Just saw your message.

Its actually a bit of a cheat. The windows are just image textures. To get the effect I render them twice on 2 different layers. On one layer I used a transparent shader with the image as the color input. The main light source is also on this layer. On layer 2 the images are plugged into an emission shader. This made colored light in the scene. Both were then combined in the compositor.

The streak effect is also a cheat. Volumetics would be more accurate but way slower. So instead I used a Sun Beam filter in the compositor on the layer with the emission textures. Then a blur texture to smooth them out.

Lovely. Really delightful to look at.
A few bits of constructive criticism:
Would like to see some furniture in the scene. Prayer benches, candle stands, that sort of thing.
The stones are also very uniform, different stones would be pulled from different parts of the quarry, and have variations in hue and value. Even a handful that were colored differently would lend a lot of interest to the scene.
Cathedrals of this kind would have a clerestory, which would add some indirect light to the top-left corner of the scene. I see you show some clerestory models in your WIP, so maybe they are already there? Anyway, seems a bit dark is all.
If the lanterns are lit with candles, they will be quite dim compared to the sunlight coming in the windows. Plus they might not even be lit during the day.

Thanks for the tips dudecon. Benches and other color stones are great ideas.

A while back I redid this using filmic log encoding. The result draws more focus to the light beams. I think it looks more realistic overall but would love to hear what others think. 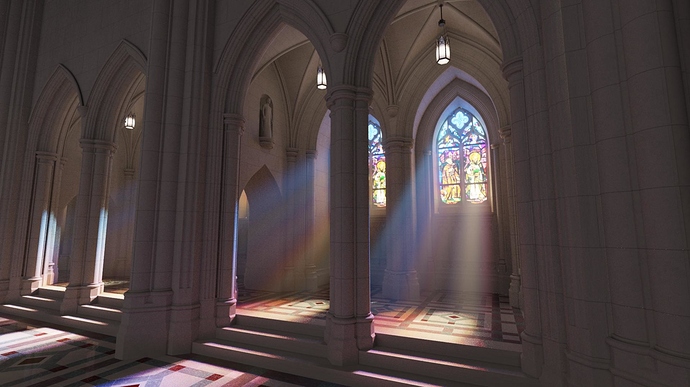