Does anyone know how to get caustics working in yafaray? I know how to do it with yafray, with the photon lights etc, but can’t seem to get it to work properly with yararay. I’ve attached a rendering of a scene I’ve been using to test caustics and translucency, rendered in yafaray with pathtracing. I’m quite pleased with the translucency on the cup and the sugar cubes, but there should be caustics from the bowl and the vase.

I’ve also tried the other illumination methods. Photon mapping seems to give me reflective caustics (e.g. from the spoon) but won’t render any transparency (that seems to be a separate problem, not sure what’s going on there…). The picture used point lights, I think, but I’ve tried every other kind of light, and area lights with the “make visible” option on…

I’ve got the same scene rendering (slowly!) in Kerkythea, which I’ve been trying out, but I’d prefer to get it to work in yafaray if possible. It’s much faster, and it seems to be easier to get the materials I want with yafaray - it’s not so picky about energy conservation and seems to be able to do nice transmissive effects without having to do full on volume lighting like in Kerkythea… Anyway, I digress - has anyone got anything like this to work? 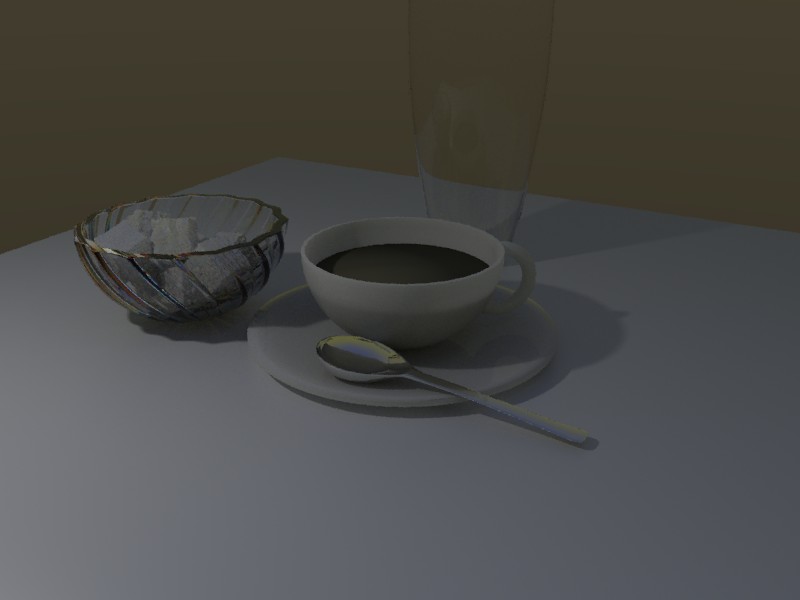