So a little rose to polish up my lighting, sequencer, and general modeling skills. I used the glow.dll included in 2.37, no external images, AO and an Area light. I think it’s also worth mentioning that there are no mesh intersections, which was a LOT of work.

It’s an artistic rose, meaning it isn’t supposed to look very real, just pretty. Basicly, no stem, and not too many petals (takes too long to make).

I created this for my girlfriend, she appreciates the effort, and thinks its really pretty. The reason I’m posting it here is cause I want to know how I can improve it, and where i’ve gone wrong.

P.S> Well it’s been a LOOOOONG time since my last post here, prolly 'round 9months or so, but fear not I haven’t left. 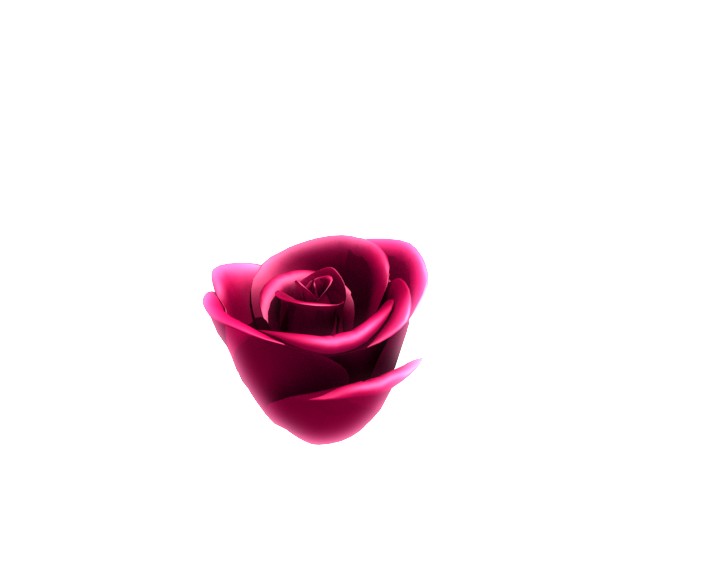 Good job.
It looks like a candy rose… put it on a cake?

I don’t think your girlfriend is the only who likes that rose wink, wink you make me melt haha.

So how did you make the rose? I mean the petals, how did you go about making it, what did you use? I’m seeing a lot of roses these days, must be the season of spring -_-!

Is the petals modellled with Curves? or ?

I might make one, too :P, perfect project for learning UV mapping and painting.

I’d love to make one of those, so please share your secret

Its really awesome! But just adding a simple stem would add so much to the composition.

No wonder your girlfriend loved it

there are no mesh intersections, which was a LOT of work.

Maybe to much work, although good for practice at the same time… But for stills, I like to model from the cameras POV, overlapping which can not be seen is perfectly acceptable. Same thing for texturing, only texture the meshes faces which are in the camera view…

she appreciates the effort, and thinks its really pretty.

Well then it was worth the effort, not just for practice…

not too many petals (takes too long to make).

You should try rotated dupliverts. Once you make them real, you can add variations here and there. Saves alot of time though.

So how did you make the rose? I mean the petals, how did you go about making it, what did you use?

I checked up some ref’s on google, mainly looking for highdef roses. From those I made a rough model of a petal, making sure to get the right amount of detail in the right places. The model of my petal had depth, but it wasn’t curved. Basicly, using as few verti as I could. Then just a combination shift-D, the Warp tool, and some proportional editing to make each one different and none intersecting.

@pofo; thanks. It’s just the glow that makes it looks candy-like.

@Ezz; the initial idea was to make a movie out of it, meaning it’d need to look good under more than one angle. When you’re POV modeling, doesn’t it make ur models look “flatter”?

Well then it was worth the effort, not just for practice…

You should try rotated dupliverts.

I’ll look into that. Though it will probably be an art in itself to make it work and look good at the same time.

Do you happen to remember what the Hotkey is for making dupli’s real? I’m out of practice…

Thanks for the C&C guys. If/when I get round to updating it u’ll be the first to know

Wewa, you should find answers in the link I posted.