My name is Pawel Jeleniewski. I am currently preparing a medium-feature film set in a post-nuclear future. The plot is mostly story-driven, with some action-oriented scenes.
It concerns a mercenary “delivering” a prisoner to the Mayor of a small wasteland settlement, to whom the prisoner owes some money. Naturally, the journey through the wasteland is full of dangers that slowly bring the two men together (in a friendly way

). Still, in the end both of them turn out to have kept important secrets, which combine into a surprising outcome…

I am looking for help in 3D modelling and animation for one action scene. It involves two main characters (said mercenary and his prisoner) being attacked in the middle of the desert by a giant sand-burrowing worm (reminiscent of a sandworm from ‘Dune’).
Although I do not plan Hollywood-style extensive wide shots of the creature, it still needs to be very well done for the few shots in which it’ll be clearly visible, in order not to ruin the impact of the scene.

I have put some concept sketches of the creature (made by a friend of mine) as attachments.

Although the proper animated renders will not be needed for a few months, until the live-action footage is shot, I need the modelled beast as soon as possible, in order to calm the fears of my actors and crew, who are concerned about this scene. I might need some sample of the effect put together (one or two short shots)…

I am Polish and the film is written in Polish, but I plan to launch it on YouTube with multi-language captions. Unfortunately I cannot offer any payment for this task - we are still preparing for a fund-raising campaign via Polish crowd-funding site similar to American KickStarter. The campaign should cover most basic and inevitable costs such as props, costumes, decorations, transport etc. But I can’t afford paying people for their work.
Still, I think this is a good oportunity to test and polish one’s skills and contribute to an ambitious project, which will hopefully gather considerable attention due to it’s independent/semi-amateur/web-collaborative filmmaking nature. I also offer a Creature Design credit in both end credits and opening titles of the film.

If you are interested in this task, please contact me either via Private Message, or in this thread. 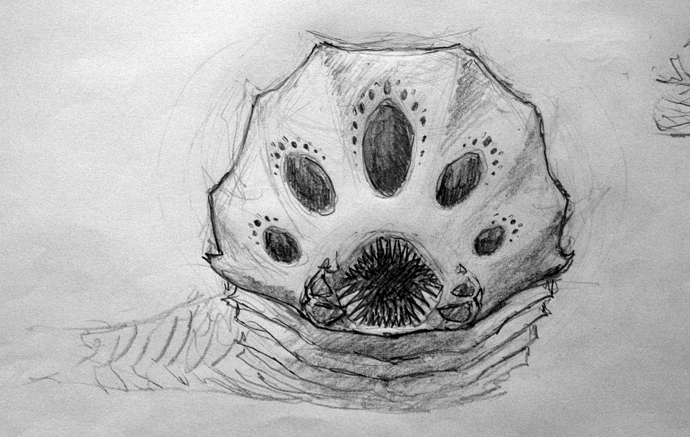 I love Dune so it sounds like a great scene, but I don’t really have the skills to be of much help myself. But regarding finding the right person/s for the task - If you provide some source material that represent the kind of shots and surroundings that will be used in the final sequence, you make it much easier for interested people to make trials and samples. And I’m sure some people could give good general advice even if they don’t get directly involved.

Do you have the sequence storyboarded? On a tight budget, it’s kinda wasteful to make a complete all-purpose rigged model if the final sequence turns out to have different requirements. Better to spend the effort on solutions for the exact shots you need in the movie.
Just as an example - the tendrils at the back of the creature, will they feature prominently, or maybe just in the background, or actually be buried in the ground? Already when doing the basic modeling, it’s useful to have a general idea of where to focus, what sort of articulation the creature needs to be capable of, etc.

As for the surroundings, the sequence is most probably going to be shot in this landscape:

This is all in one of Polish National Reserves, near the Baltic Sea coast.

I am sketching a storyboard of the sequence right now. Already I can say, that the creature will be seen partially in most of the shots. Also, since it’s a very dynamic scene, there’s going to be a lot of movement, both characters/creature and camera movement (=> motion blur). We must however insert at least two shots of the monster’s full body (when it emerges from under the sand at the beginning and when it dives into it in the end).
It certainly has to have it’s head modelled in high detail. Also the “belly” may be clearly visible in at least two shots.

I will post more details wen I advance with the storyboard…