I think it’s a great theme. I’m in!
—Place holder—

Modeled in Blkender 2.42 and Rendered in Yafray. Texturing and border done with the Gimp.

The A7V was the first german tank. It was created to counter the first british tanks at the end of the first World War.

I started modeling the basic shape friday night when the theme was announced. The model and texturing was done by saturday night. I spend my morning tweaking and getting the render the way I wanted in Yafray (I had some rendering error that caused me quite a headache) Everything is modeled: the rivets are all hand placed (that took a while…)

I’m especially proud of this entry as it’s probably one of my best models done in such a short time. I’m happy with the camouflage too.

Well I’ll post it in the Finished works section and good luck on the WC you guys!
-Edeehem-

I am In
<PlaceHolder>

I just hope my modeling skills will conve my idea properly :rolleyes:

placeholder for me as well.

Here is my pure entry. Texturing done in Gimp.
It is a helicopter from South-Africa, the Rooivalk.

I’m in too. It will be my first weekend challenge.

A lot of competition.
Ah what the heck, I’m in too.
[placeholder]

edit: nah i dunno what open is. I read the sticky and it’s very confusing. can I make the image in blender or must it be artistic and photoshopped or something? I will look at other threads to see if I can find out

edit:edit: O I see. I thought the thread meant open/pure but it means open/closed. I’m back in please

Ooo, this looks good for my first weekend challenge.

Or not. I lacked the time, and probably the ability as well, to transfer my concept into blender. Good luck to everyone else.

http://img69.imageshack.us/my.php?image=hummerek9.jpg
Pure
I would like like to give it a try.
augh ran out of time… oh well next time

I seriously need to learn materials and lighting.

grr, sorry I’ll have to withdraw. Just don’t have enought time for it cause of some personal problem at home. Had a idea to create a horse-drawn double ballista (a giant mounted crossbow). maybe later when I have time, I’ll try to create it again doe a WIP. 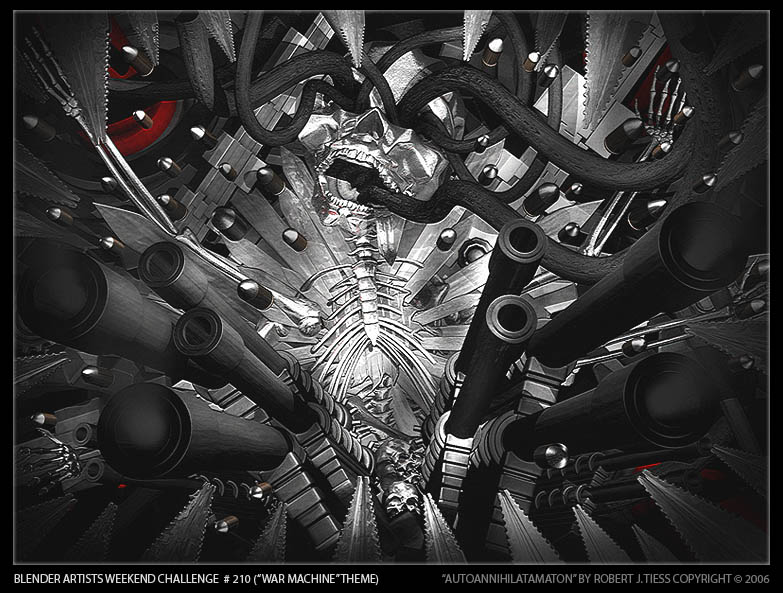 Contrast was tweaked in post. This project made use of part of my skeleton from my Faustus project. Particle effects were used for smoke from some of the turrets.