Great entries guys. My favorites were amiller’s, Padfoot’s, and RobertTs. Really wish I could have participated, but other CG endeavors take priority right now.

I really like padfoot’s symbolism, and Robert’s entry is just amazing. Tough choice.

Really nice stuff from everyone this week. Except that silly Pacman thing:p.

I was stuggling between amiller and robertt but i chose robert because it was different from the rest.

Wow! I didn’t know think anyone would think of mine after seeing RobertT’s! I decided to vote for radulan’s because it has a really nice cartoony style, everythings simple, but perfect. I really liked robertT’s though, (of course, that goes without saying)

BTW, Can some of you give me an estimate of how long you spend workin gon these each weekend? I’m just really curious.

Amiller: I Originally started on something that would’ve been a hologram display… becoming unhappy with that after a few hours on Saturday. On Sunday I spent about 5 or 6 hours putting together the Settlers of Catan render (for those who wonder I put together a complete board.) since I’m not that familiar with the Defocus node that slowed me and I was originally going to have SSS on the plastic pieces before I decided to go transparent.

Radulan, very nice, can we get a look at the rest.

Radulan, very nice, can we get a look at the rest.

Well here is the rest of the board 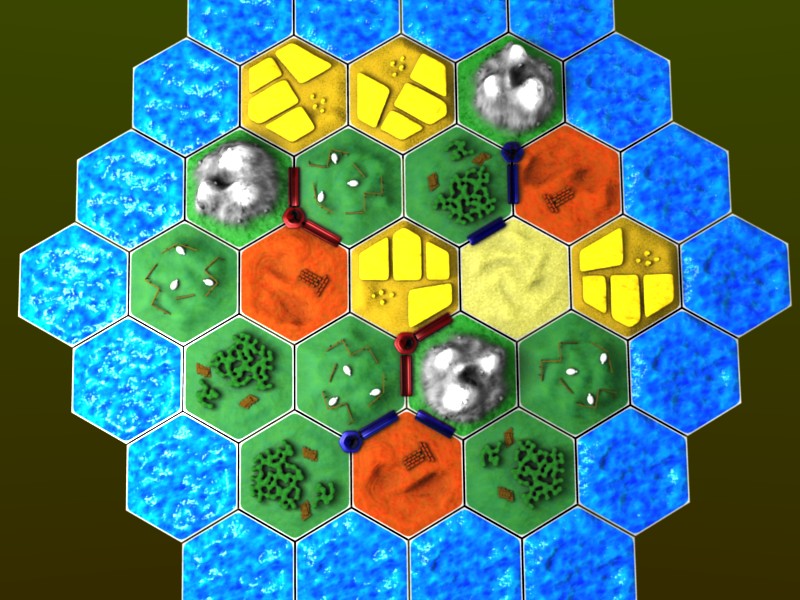 BTW, Can some of you give me an estimate of how long you spend workin gon these each weekend? I’m just really curious.

anything less than 10 hours of creation is usually not worth showing for me (not up to my own self-standards that is). The one normal weekend challenge I participated in (Challenge #343) took me 10-20 hours probably. Challenge #347 was a special week long and I spent at least 25 hours on it. I think I may spend more time than most though. I am also curious about how much time others spend on weekend challenge works. Particularly the one’s who create really great stuff.

I don’t really pay too much attention to the clock when I’m blending, so I don’t have accurate times, but on average I probably spend between 5 and 10 hours on a weekend project. Other than this weeks cheesy Pacman thing that only took a couple hours at most, last weeks was probably one of the fastest. (maybe 3 or 4 hours) One of the longest was the non-participating SRV tribute guitar that took between 15 and 20 hours because of all the detail and texturing that was involved. I’m not counting the days spent searching for inspiration, and the hours spent after I’m done weeping about the results. Oh yeah, and lets not forget the countless hours spent learning Blender in the first place. (the broken road that leads us here.)

I really wondered what would be done for this challenge. Had some time on my hands, wanted to enter it, and couldn’t come up with a danged thing. Oh well, next week …

This is only my opinion, so dont take offence.

Armiller, Very little to critisize except possable slightly over bright lighting around bottom of the board. Photo real.

Krisknak, A strange mixture of objects, some much better textured than others. The wood txture could probably use some scaleing in the texture mapping panel. The upper right game piece appears to floating in mid air. But overall, I think this was a missed opertunity for a some candel lighting effects.

modlar, A good picture, but it is let down by, non square tex map on the floor. Tex mappin not right on the benches. Flat?. No shadows, and no reflections or AO.

RobertT Fantastic pic, and a much more subtle/correct use of focus blur. Not to mention a great interpritation of the brief.

Rodrigo Sidney, I dont get it, but some aliasing around the turned edges.

th555. A fairly simple but pleaseing image, but did you use post pro on the AO. This appears mirrored on X, and I dident think yafaray could do that.

Urth, Much funnier if a little too flat.

wutervd, Again a good pic, but it could have been improved by modeling the creases rather than setting solid. Also the map appears to go through the cup. Sticking pins in the table top makes me cringe.

Helix, S–t hot. The only thing that looks a little off to me is the internal maze walls are round section, while the perimiter wall is square.

renderrednelb, A good start, but maby booliens could help you finnish off the modeling.

rebogey, agh wtf is that again.
I was struggling for an idea when I saw the article on the discovery of deep sea green bomber worms and how they seem to use a similar strategy to aircraft avoiding heatseaking missiles. They apparently shed spheres, evolved from there gills, which glow bright green. It is believed this is a defence stratigy when attaked by a preditor.
Probably only spent about 10 hours on this one, but it varies. Sometimes I will spend all weekend remodeling somthing when I get the methodoligy sorted. Other times I dont have an Idea until teatime on monday, and have to do a lash up. The revamped computer helped tremendously this week with much faster preview renders etc.
Now Im going to spend more quality time with my first love. The game engine, and play catch up again.

Padfoot It looks rigged to me.
Bogey.

What do you mean? I didn’t use any armatures.

ps, did you use freestyle, or is it just spec. I had a quick go over the weekend with it but I need a lot more setup practice yet.

Thanks for the crits Bogey. Some valid points. I for one won’t get offended, in fact, I would like to hear more crits on my stuff.

Good eye on the Pacman render. I was doing my 3d interpretation of a 2d image and I started with the inside walls. When I got to the outside walls, I didn’t think the rounded look would work so I went square. I didn’t think it looked right either and I thought about changing the inside walls, but since it wasn’t really a serious work, I just posted it. So I agree.

Now for my crits on yours. I agree with you 100 percent. “WTF is that.” KIDDING! The only crit I have is the green bombs don’t seem to match the rest of the image. I’m not sure why, maybe too many particles, but I may be wrong since I haven’t seen the real creature yet. Other than that, it looks awesome.

Helix, yes, a bit of artistic license on the green bombs. I tried to make it look more like aircraft flairs. The scientists havent actually seen them used, as there lights drown out the glow. I dont suppose they would actually fall like that. Just float in the water to dstract the preditor while the bomber worm makes its escape. Possably like a lizzard sheds its tale.
Heres a link.

A newly discovered species of deep sea worm releases tiny balloon-like structures that glow in the dark to distract predators, scientists have found.

Thanks for the crits Rebogey.

The rounded edges might be JPG artifacts actually (I really need to test other formats), or might be because I used Mblur instead of OSA. My computer is slow for this kind of stuff so I try not exagerating on the render settings.

Urth, a year? I think you’re getting there faster than you think, your modeling is really good, and the texturing is getting better and better. I’d suggest doing some practice with texturing, just put a plane at an angle to the camera, and set a sphere on it. I’d suggest making the plane some sort of fine wood, and making the sphere a mirror. Then try with some harder materials after you get that done.

Of, course you don’t need to listen to anything I just said, just an idea, that’s what I would do.