off topic:
so do you have a monster with an abnormal brain abbey_normal?

Nice entries everyone. Good luck to all.

In case people don’t see it in the other thread, I made a non-competitive entry titled “Old Reliable” 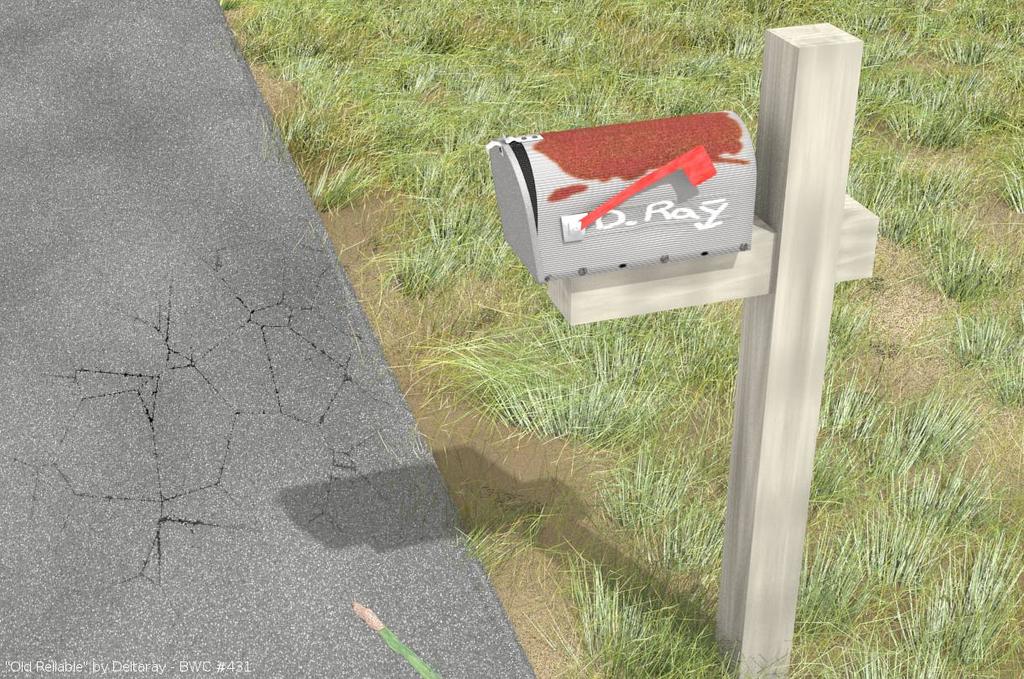 off topic:
so do you have a monster with an abnormal brain abbey_normal?

Wasn’t that hump on the other… side…
What hump?
Er… nevermind…

lol, it is not true.

Wasn’t that hump on the other… side…
What hump?
Er… nevermind…

Haven’t seen that for a long time.

I vote for samM for originality

Wow, I am shocked by the lack of quality entries.
Someone had better pick a good topic for next time.

Brado, your image is very dark on my monitor,
you might want to calibrate your monitor,
very good modelling,
with the right lighting and textures,
some personalization to turn it from a tech shot to art
and you could have won.

@Zenitor - Thanks Zenitor, I know what you mean, its dark on my monitor too. there was few things I wish I had a bit more time for like textures, lights and compositing. Spent all my time on modelling and I am new to the compositor so it takes me a while to experiment with it. It will be a good model for me to work with later to practice some of those skills.

@Cymoth - Love your image, you created a real good atmosphere with the candle and it has a good link to the subject of old technology. When I think of the first computer I think of a really old Apple mac or something. You went a step further with the abacus. Well Done.

Ok, here is my critique for this week.

@abbey_normal (Horse-drawn Carriage): Good modeling and idea. While the textures of the carriage are a bit bland, I think that this image would have benefited more by having the carriage on a dirt road instead of a modern one.

@brado (Old Phone): I get the impression that this image is dark on purpose to show that the lights are going out on the telephone? Either way, the image is too dark and I think this image could have easily won if you would have added more light. Your modeling is very good. I really liked this image and it goes right with the theme.

@Cymoth (The last bug-free laptop): Excellent use of the candle to enhance the feeling of old technology. The fact that its your light source lets you get away with having two subjects. I think an abacus is probably easy to model based on standard 3d primitives. I see that you went the extra mile with it by putting in frame supports on it, which is cool because you don’t see them at first, so the image has more depth. But you really showed your abilities off with the candle, which looks great.

@JO5EF (The Very First Technology): Ahh nice. Good idea and well executed. The bone texture is good and so is the hand. The bending of the hand perhaps looks a bit unnatural, but I haven’t seem many ape hands to know. I think maybe if you could have shown the thumb more it would have been nice.

@MatthiasSchmitz (TV): While it is becoming an old technology as we speak, perhaps its a bit of a stretch. You did a good job with the modeling. I’m not sure what you’re trying to show by having a rainbow on the TV in a grey scene.

@N00b@Blender (Floppy disk): Welcome. A decent first entry and fits well with the theme. Its nice that you did more than just put an image map on a plane. You used some boolean operations perhaps? When I make an image, I try to make a bit from my imagination, but then go check out reference photos. The first thing that I noticed in your image is that the notches in the bottom and the key hole near the center ring are square, which is not right. On a 5.25" disk they are circular and not as big.

@Sam M (Suzanne): Do people have something against Suzanne or something? The modeling here was dead easy right? Your lighting and texturing is nice. I like it, but I guess I feel that you could have done more. Maybe contrast it with something new to show that Suzanne is not so new?

@Someperson1 (CAVEMEN): YEA! Someone made a wheel. Not bad. The first thing I feel about this image is disorientation. Which way is up? Modeling is good. For the rock textures, try reducing their size a bit and that might make it look more realistic. As is the bumps looks kinda big.

@Sonic14 (World’s Bestest Computer): Nice table and chair. I think everyone who looks at this will wonder what is on the computer’s monitor. You should have made it much bigger and flat against the front. If we could see a specific Operating System being used (like DOS) then it would have been more convincing as old technology.

@stuart.t (minidisc player): Good photorealism here. The only thing I’d say is that there are ways of giving the discs the rainbow iridescent effect you see on CDs and Minidiscs like these. Yours look nice, but they are missing that affect and that takes away from the realism. Otherwise, this could practically be an advertisement photo. Good job.

@TWS Admin (My Old Robot): Is this EVE from Wall-E?

The texturing is nice, but it might not be right for a robot. I think if you’re trying to show something in the future but its old from their point of view then you should have made the item appear more used and instead of having it stand straight up, have it drapped on its side like a doll that has been dropped or something. I’m also having a hard time being convinced that something that is old is still able to levitate its head in place like that. Probably should be more connected.

@Sam M, my first though was along these lines, even though I would have put in a chisel and some shavings. At first glance I thought wow, but noticing the ear I wondered whether you actually UV unwrapped her?

4 JO5EF, I take it that yours is from the opening scenes of 2001 A Space Odyssey, the bit just before where the bone turns into a spaceship. If I was to do this I too would have probably bent the wrist, one to break up the straightness, two to show i’d rigged it, and three to help it fit into the composition.


(Skip to 5:45 if you can’t wait to see the right part!)
For those art critics out there, this was quite interesting…

@rarebit: exactly, glad you noticed. concerning the bending of the wrist, i took quite a few looks at my own hand while holding up a bottle to make sure it’s actually possible (it is!) but i must acknowledge that the result looks off.
also, thank you very much for the link. i just watched it and very much enjoyed this nice overinterpretation!

@deltaray: Your comments on the entries are very much appreciated, thanks! But why is there blood on your mailbox? What happened? 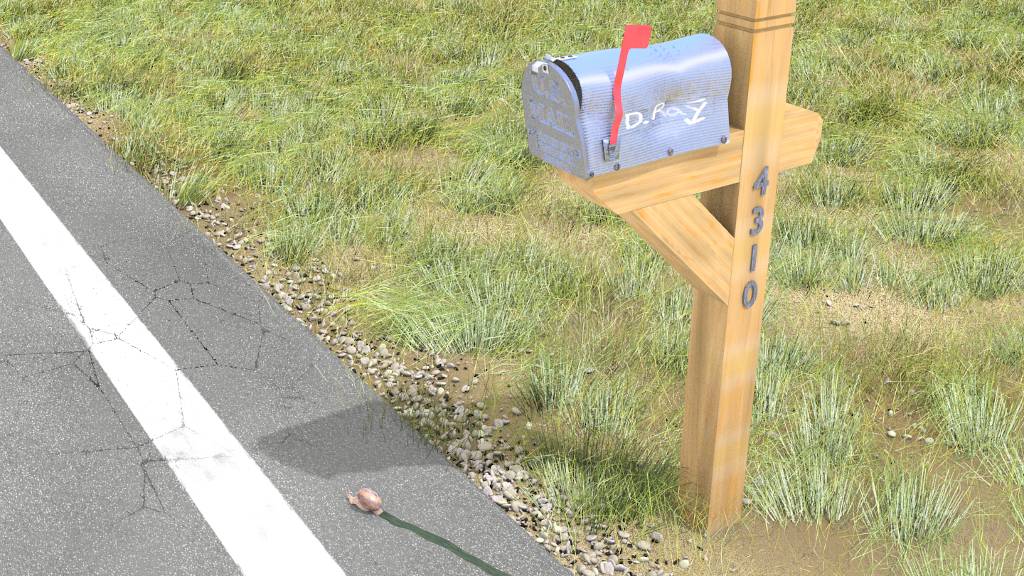 @stuart.t (minidisc player): Good photorealism here. The only thing I’d say is that there are ways of giving the discs the rainbow iridescent effect you see on CDs and Minidiscs like these. Yours look nice, but they are missing that affect and that takes away from the realism. Otherwise, this could practically be an advertisement photo. Good job.

Thanks DeltaRay for the critique. I really tried to fix this (and many other things, quite a few fine details aren’t visible) I ended up using tangent shading and mirror with receive transparent. This is mostly because the disks are behind a “plastic material”. Any suggestions on getting these effect would be appreciated.

@deltaray.
No it’s not EVE though th general design was based off of EVE. I just put it up there cause I haven’t opened that .blend file in ages (I barely played around with it) it was my first character I made in blender.