This week’s theme: Surrounded by Darkness

Gordi
A Day At The Office For A Hero

Icestorm
Are we Alone? RobertT
FEARLESS THROUGH THE SHADOW VALLEY 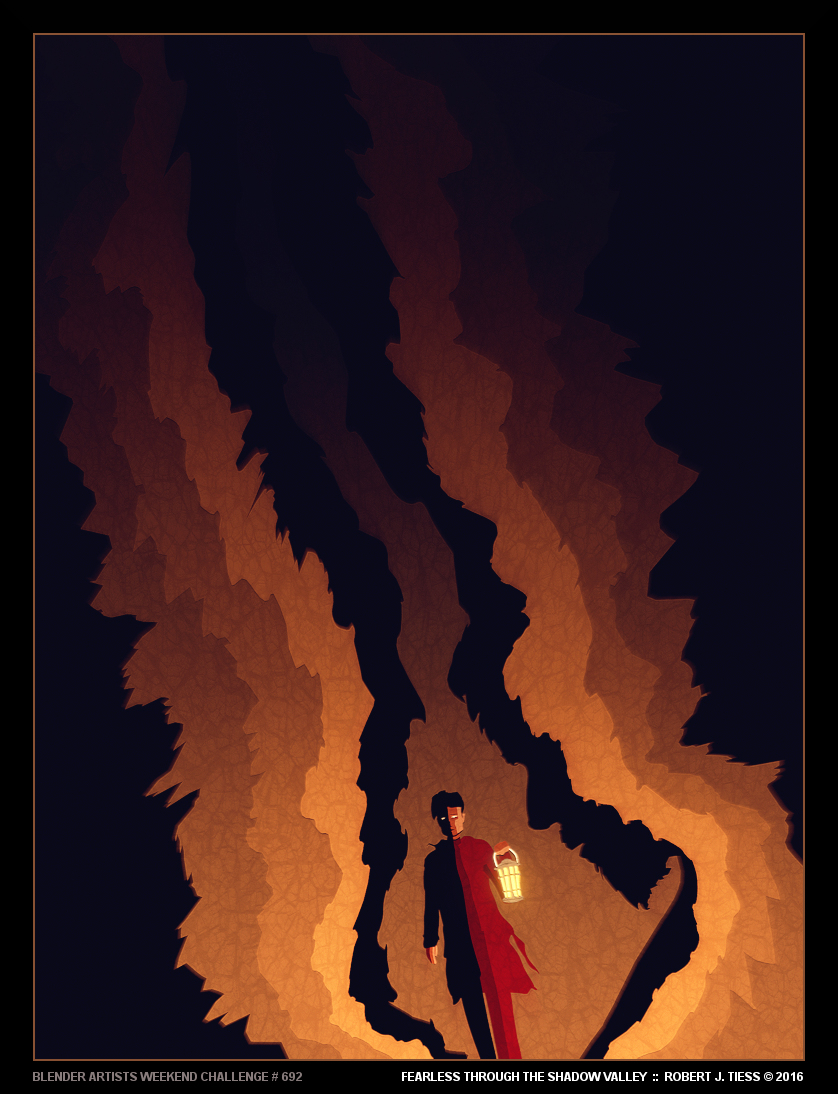 I like the entry of fcharr, because you can really feel the darkness around you. Also the mystical appeals to me.
But the most well-made picture for me is that one of Helge. I love the idea. Why is it non-competing?

@Gordi: I had something like this in mind when I first came up with the theme. If you ask me, there can never be enough creatures around! But I guess it will end bad for them anyway…

@Icestorm: Very impressive! I can almost see the planets moving. I’m still not exactly sure how you put this one together. If you don’t mind me asking: Can you give a few hints on the creation process (e.g. textures, shaders, post production, …) of the planets? Nicely done!

@nadal1: Actually I expected a lot more black and white / gray scale entries. Seems like you were the only (competing) one who went this road. Keep it up

@Evivivi: Before switching to the light bulbs I was going to try a little lighthouse scene. In the end, this (and especially the ocean needed for that) turned out to be a much too time consuming, so I abandoned this idea. Nice to still have an ocean entry. Btw. I like your new logo/watermark. This one is subtle and still contains all the information. Thumbs up.

@fcharr: It took me a moment (and a google search) to get the World of Warcraft connection. Updating the stone to the new blue one was a good decision. It draws the attention towards the center a lot better then the original one.
I don’t know why, but I would have bet, you’d enter some rock/metal/music related entry. E.g. something like “Fear of the dark”. I have to work on those predictions!

@vaguehorizon: I don’t get the title but I like the image. Reminds me of movies like Sphere or The Fountain.

@PuaGo: Very nice! This looks a little like the drawings from old books about space which I had when I was a child. Nice memories. Got my vote

@RobertT: I really like everything about this one. From all of your character driven entries I remember, this is probably the one I like best. This could be right from the middle of a book (surrounded by story).
I would have liked to add some critic in order to balance this comment - but I just can’t think of anything

@Photox: What a bad weather! If you had picked another (more sunny) day you would probably have met Evivivi standing somewhere on that pier. Btw. the second 3d-software I really used was called monzoom. The good old days!

Thank you very much, Helge.

The models for the planets are 3 spheres. The first is the ground, the second the clouds and the third the atmosphere. Nasa actually has textures for Earth. Not only color ones, also bump maps, reflection maps, etc. There is also an ocean mask and bump maps for the clouds. I rendered on 2 render layers. The first consisted of everything except of the atmosphere which I rendered separately. Then I fused the layers together in the Compositor and added a background from pixabay. I also added a glare effect, lens flares and lens distortion etc.
Hope I explained it so that you could understand it

This week’s theme made me think of the vault of the wardens’ last fight. I was going to call it Tear of Elune

@RobertT:
I’m generally bad with bible references. But knowing the entry image, this one was pretty clear to me.
And thanks for the link. Checking it out I noticed that (compared to the English text) the german version I have in mind seems to be the G-rated translation

(Which is hard to tell, as I don’t know (and wouldn’t understand) the original.)

E.g. it is not called “valley of the shadow of death” where I come from. It is just a dark valley. (Although there seem to be other translations.)
And while I’m at it: Does the english word ‘evil’ imply that there is some kind of mind/intention behind it? (E.g. a stone falling on your head cannot be evil as it didn’t mean to harm you. But the person throwing the stone can.) That would be ‘Böse’ in German but the Psalm 23:4 translation uses the word “Unglück” which is usually caused by ‘bad luck’ rather then ‘bad intention’. Programming languages are so much easier…

@Icestorm:
Thanks a lot for the explanation. Using two layers was the detail I didn’t come up with.
And regarding cloud-bump-maps: I noticed the importance of this on the last planet I tried. This adds a lot more realism than I expected.

@fcharr:
I guess I’m even worse when it comes to WoW references

Everyone is so symbolic this week. I watch way too many cartoons.

@Helge: once exploded i think you’re correct, sweet and tasty if you can pick up the bits!
Not for sale

but a quick search brings something similar: http://blog.williams-sonoma.com/chocolate-pomegranate-clusters/

Shouldn’t discussions about the entries be postponed to after the voting and a winner is announced?
I voted for nadal1 (to clarify it’s not a self vote - can you do that anyway?) because it trigged emotions in me, like “so much light yet surrounded in darkness”. I had a similar idea I was working on for this (coroner, sitting guy in lots of light but with a “dark mind”, with dead girlfriend on the table - maybe inspiration for others to steal?), but was unable to complete it in time (real life came up).

Not for sale but a quick search brings something similar: http://blog.williams-sonoma.com/chocolate-pomegranate-clusters/

Looks like a valid approach to me. All we have to find out now is how to make it explode.

Shouldn’t discussions about the entries be postponed to after the voting and a winner is announced?

I thought about that too, but I think waiting for the winner to be announced would probably prevent the discussion from happening. People are thinking about the entries the most while voting. And once the new theme has been released all interest switches over to that (and the new entry thread). Apart from this (and unfortunately), an active voting thread will push the new entry thread down until it gets bumped up again. Which makes it easy to miss the new theme.

I voted for nadal1 (to clarify it’s not a self vote - can you do that anyway?)

Actually, you could - as the poll isn’t really aware of the entrie-user relationship. But I don’t think many participants are doing that.

I wouldn’t expect it either, but it looked kinda weird for me when I got a single vote earlier

Yeah, I realize this isn’t to be taken too seriously.

I think you are right. After all this is for fun (and practice) - no need to take things too seriously.