Agh missed another weekend! My vote was tied between str11 and skadoosh, vote went to skadoosh as I found it a tad more creative even though str11s entry is technically nicer. Overall though my fav entry is from RobertT, it’s beautiful. Well hopefully I won’t miss this weekend but during the holidays time is limited.

Awesome entries everyone. Had fun watching your ideas come together and being able to see the final outcomes.

@robproctor83 Thank you for your vote, too bad you couldn’t join. I updated my entry minutes before deadline

@Helge, i love how you put those little animals in your render, they are so adorable

@RobertT as always great work and as always, can i ask for viewport?

My vote went to RayVelcoro, i really like color of the lights

Thank you Robert, looking back and forth makes me even more amazed

I wonder how many people will be around next week, during Christmas…

Anyway, here are some comments for those who made it!

purbosky: When I was a kid, I liked to imagine that electronics were actually some tiny cities. I guess LEDs would be the street lamps then! The variation in colour of the images nice. It could use some sort of background though.

RayVelcoro: I really liked the colours, very warm. The reflection on the water is also pretty, specially the fake “circles” from the bridge. It could be brighter though. Also, I’m not sure if the person helped in the composition. As the single human on the scene, it calls a lot of attention, yet the bridge is the interesting part.

unyxium: Nice long exposure picture. To make it more realistic, you could’ve made some areas brighter and others almost transparent. I also liked the variety in the buildings, but the plain yellow/white windows in the background look a bit fake.

beau11: Interesting atmosphere. Very mysterious. It also has a Noir vibe, as if the guy on the trench-coat were some kind of detective. My only tip would be to try to make the person stand out more from the surroundings, maybe by making the volumetrics denser.

joshwinkler3d: A pretty slice-of-life image, depicting love as it really is: This might not be a cinema, and the furniture is very simple, but the couple is enjoying each others company. The image might be noisy, but I think here the noise worked positively, giving it kinda of a painterly look. You could’ve played with contrast a bit more, maybe making the couple visible as a silhouette and making the film brighter.

caz747: The warehouse looks pretty big, and I like big stuff! The environment is nicely detailed, but there is nothing “going-on”. That catwalk is almost asking for something to happen on it

Btw, thanks for the video on rim light.

david.speer: I liked the variation on the buildings, they all seem to have some sort of “personality”, if that makes any sense. The car was also a nice touch to keep me interested. Also, nice usage of freestyle. My only critique is that there is no difference between the street and the sidewalk.

Ansaar13: Interesting idea: Graffiti that glows. The alley looks nice, but the fact that the graffiti is glowing is not very clear to me (the orange light could just be a lamp outside the frame). I think if the graffiti were in an otherwise dark alley the effect would be much clearer.

str11: Impressive detail, very well executed. The water reflections look pretty nice, and so do the lights. My main critique is that I can see a repeating pattern on the texture of the sidewalk (down right), which feels a bit strange. In case you don’t know, one trick is to use the “random” output from the object info node. With this, you can shift the UV coordinates and get a slightly different texture.

fcharr: That stairs look nice, and the symmetry is pretty: One window in each side, one building in each side, etc. The scene could be brighter though.

SpaceC: Nice usage of long exposure. The reflections of the building in the foreground looks very nice. Post processing looks a bit strange though: Many edges are jagged. Also, nice usage of the donuts tutorial from Blender Guru

Helge: Haha, very surreal. A moth on top of a bokeh. Nice colours too. This would be a nice wallpaper.

OLG: I really liked the woman in the foreground (err… I mean visually). The contrast between dark and bright is really nice on her. The city is nicely detailed, but the lights seem to be sometimes above or beside the buildings, which is strange. Also, I get this strange feeling that there is a lot of post-processing going on: The window reflection feels “fishy” (the glass seems to lean inwards and does not reflect everything). Also, the reflection of the stars is different from the stars themselves!

RobertT: Nice positive message. The details on the lamps are pretty cool, and the colours are beautiful.

FuzzyPeachApple: The person on a boat in the foreground makes the picture very emotional and interesting. The water looks pretty cool (not sure if it realistic, but it looks nice). The city looks a bit homogeneous, with buildings of the same size and very similar trees.

@Helge, i love how you put those little animals in your render, they are so adorable

Glad, you like it. I’m having a lot of fun with these little guys.

I wonder how many people will be around next week, during Christmas…

Let’s see. Last year we had 8 entries (4 competing). We should be able to beat that. On the other hand, I’m not even sure if I’ll be able to enter something myself as we’ll be away, visiting family.

Helge: Haha, very surreal. A moth on top of a bokeh. Nice colours too. This would be a nice wallpaper.

Making an surreal entry can help to speed things up. Maybe that is also a way to solve the Christmas challenge/problem.

I was a little disappointed with my entry, but to be fair, my disappointments have greatly improved over the years. 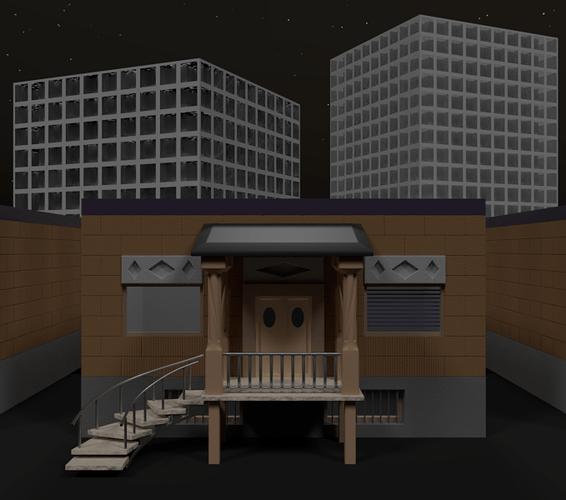 I feel tempted to replace the image on my site with this one…
http://blender-weekends.franciscocharrua.com/Night-City-Lights.Outside.html
OLG (OLG) April 26, 2018, 9:40am #10

Millani, as always thank you for the feedback. Surprisingly very little post processing for this one. But you highlighted something I did wrong but couldn’t figure out just quite what i had done. I used a half dome with a particle system for the stars. The glass is reflecting the stars behind the woman. It looked funny to me as well but I did not figure out what it was until you mentioned it. Next time I using just a plane behind the scene. Thanks again for the feedback.

All the post were amazing as always. The creativity is always off the charts.

This is my first voting here…
Its a pity that there is only one vote to cast and not possible to otherwise promote more than one entry. (as in this current week I hadhard time to decide between RayVelcoro, skadoosh and str11. watching earlier entries and similar situation would occur for me. finally I voted for skadoosh but it was hard to decide…)

Wow, six votes already! That’s even more then I was hoping for. Thx guys! I had really fun modeling it in a procedural manner. I now see i forgot to add a subtle layer weight node to the Christmas lights.

Thx for the comment Millani, I was hoping the character gave the composition a somewhat sinister touch.

My vote goes to caz747, i like the composition a lot.

Yes, I got a vote - thanks to whoever did

@Millani Again thanks for the feedback, always good to get. This idea was last minute, I had a few hours so I didn’t have time to deal with the noise other than try to work with it. Thought I would use a spotlight as a projector, a fun thing I found out how to do in a previous challenge.

Thank you Millani, i was looking two days at my render and in last minutes of entry time i’ve added lamp and umbrella 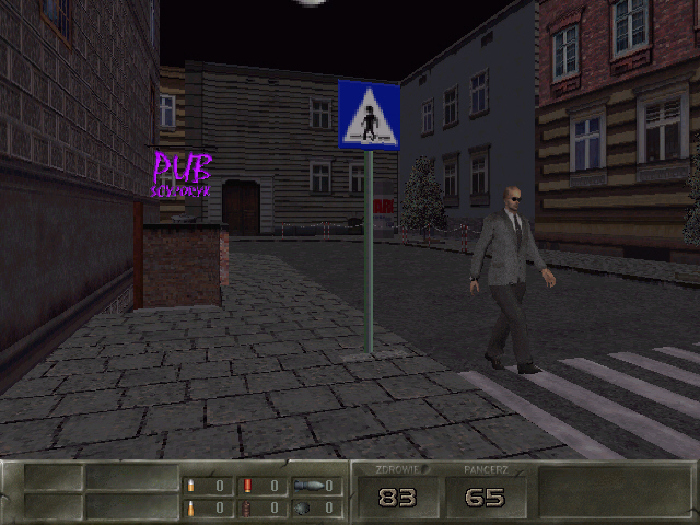 And i got 3 votes! Thanks

@fcharr I think you could easily improve your scene by having added some lights. Lights on the buildings, maybe a light pole, it just needs some lights. The model looks fine I think, but your missing a large amount of potential by not utilizing lights properly. Makes a huge difference.

Five vote, wow! A new record for me. Thanks RayVelcoro and the other who voted for my entry, it’s much appreciated.

Great stuff from all the entrants, the standard of work here just keeps getting higher.

Cheers for the critique, Millani. I will keep working on this week’s image as it is calling out for some real drama, and as you say the catwalk would be a good place for it.

@fcharr, just to give you an idea of what I mean I took your image and added a couple lights in photoshop. It would look a lot better with real lighting in Blender, but this should give you an idea… You gotta use lights to add depth and atmosphere and also to just brighten it up. You never want to have a dark image like that, unless your specifically going for a dark theme, and even then you would want some contrast lighting. 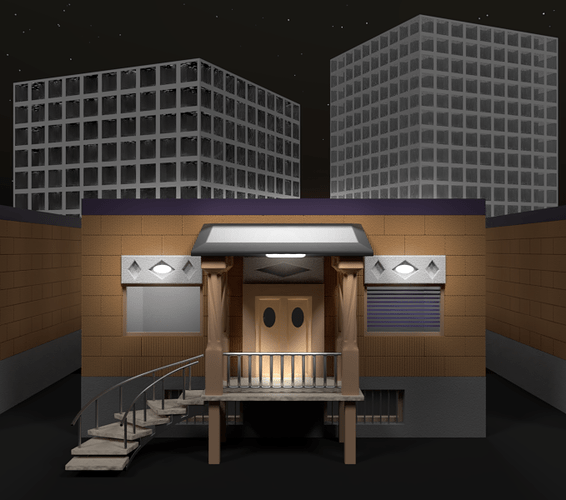 I felt good enough about my work this week to post it on the Blender sub reddit. I ended up getting some positive feedback! Somebody set it as their phone background, and he asked for a copy for his wall. So overall I’m proud with my work this week and I learned a lot! Without these challenges I wouldn’t have the inspiration to finish scenes like this, so big thanks to Helge!

Also does anyone have the grass essentials? I asked for it for christmas because it looks wonderful!

Thank you millani.
Your words are appreciated and helpful as always.