Awesome entries everyone. Love the feel and lighting you had in your scene @TomZed
@ joshwinkler3d I never thought I would say a brain in a tank hooked to electrodes would be cute but " that’s a cute looking brain "
@RayVelcoro very nice clean render there, made me want to break out my scrabble board.

Again, awesome entries to all.

think we all got stuck into that stills. I mean we play with blender… blender gives us much much more than rendering stills. it is blender!. It is just an idea… How would it be to create animations? stills do all… and nothing needs to be in hollywoods perfection… just for fun and glory.

“Quick smoke effect” is not a competing image! This may be an error

[I see it now] Sorry, my fault, the image is in the list of non-competing Haha

@Piet Time is often the issue with animations, and even with the stills. There have been more appearing recently so if you want to do it, go for it.

@Piet You are right, for the next one, i will try to do something more impresive! ^-^

Shouldn’t DoriNori’s entry be pure? I think he can honestly say to himself that he did “nothing” with Blender

Didn’t expect to see so many entries regarding this theme, some great too! I really liked the entries coming from xamenzie, TomZed, fdo, DM9 to name a few. My vote went to str11. I like the composition, colors and modelling. Only thing that could use some retouching is where the characters legs joins his torso. A little bit of mesh editing or a simple Photoshop clonestamp would have fixed that minor incorrectness.

Good Blendering guys, can’t wait to see all entries on next weekends theme!

If Dori did nothing in blender, Dori do something that is nothing, pretty creative but most people do that Haha

Shouldn’t DoriNori’s entry be pure? I think he can honestly say to himself that he did “nothing” with Blender

Indeed, that was a tough decision. I almost forgot starting the voting thread when thinking about it, yesterday evening. In the end I added it to the list of open entries because DoriNori probably did “nothing” with C4D, Maya, 3ds Max, OpenSCAD and Kais Power Goo, … as well.

Edit: And, on a rather philosophical note, there is the question if the ‘nothing’ used in the making of this entry was new or if it was there before.

I voted for DoriNori, which is to say I didn’t vote at all. The piece reminded me greatly of the ‘Ballet for nobody’ performed by Rodrigo in central park, NY, on ‘Mozart in the Jungle.’ During the performance he briefly plays soccer with a bunch of kids, and is pelted with water balloons.

The ballet is performed in hopes that Rodridgo’s inspiration and muse (Mozart) will return. Here’s hoping that DoriNori’s experiment works.

Nice idea by Piet, to use the entries from this week’s challenge in a collarge effect.

I think that just two of the entries are related to the theme.

My vote went to Evivivi, I think the surrealistic scene is spot on theme and the image also deserves credit for the 3d integration of the photographic elements. - Really cool.

My second favorite is the other brain by Joshwinkler3d, the way the electrodes are placed to appear like the eyes of the brain is a great twist. A slightly different framing / composition would have given more impact to the image though.

And not to forget Millanis entry, which is hilarious, - if you read German, that is. ^^ 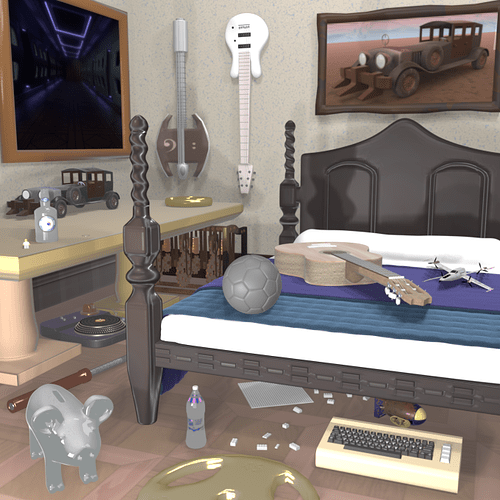 A quick port into EEVEE, had to play with the lights. Some of the materials didn’t quite work out right.
On the bright side, no fireflies.

@DM9 Thanks for the feedback, composition has been coming up a lot recently with my entries. What do you think I could do differently with this one?