Been doing alot of research on this one.

It just came to me that from a soviet perspective, the drink Red Bull would mean something humorously cynic.

Hmmm i like this one.got some ideas.
the soviet union was still in power while i was stationed in west germany.
i have seen a lot of soviet era propaganda.read much about that era.

Really woooow and that Russia had to ration their food supplies during the war and helped the usa against Nazi Germany.

Dude, did you had history in school? oO

Or did you sleep through the classes?

Lol, ya I studied in class then sleeped after the test I only had US history in school I took the community collage route and not the collage route in highschool.

According to GED grade finder I’m only at a 7th-8th grade level at my age but some people say I wasn’t challenged enough in school I got bored easy.

I was told in school that most of the stuff I would learn I would never use in real life so I learned what I thought was useful and retained my brain mass for learning how to 3d animate and studied history and everything else later.

Some people are like I’m smarter than you and I’m like " can you tell me how the internal combustion turbine of a jet engine works" and they look at me like. 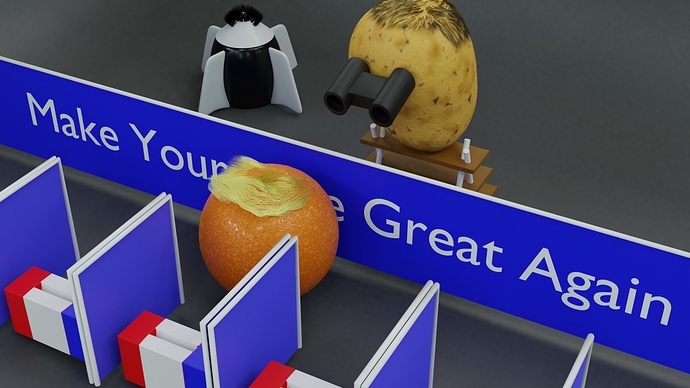 Darn it, I’m doing an orange! Obvious, I guess, for anybody going with current events. Yours is looking good.

Smite The Workers (but only the lazy ones)

My version of the 1931 Poster. Original poster was in Russian and even though I took Russian in college the only Russian I remember is, “I don’t speak Russian.” So downloaded a font that kind of looks Cyrillic.

My old brain vaguely remembers the Soviet Union time. Too much “little water” in between.

The Death Of Stalin is such an underrated movie. Hilarious, jey a warning.

I get it! orange is Trump, potato is Poutine

It sure does feel like a long presidency, already - but I didn’t notice Trump being president of the US since soviet times. Propaganda must be doing a great job… I need to find more aluminium foil…

Nice one, I didn’t know that there was something called “Poutine”.

@fcharr Yep, you got it. Figured Russia, vodka, potato, Putin. So Putin "supposedly hacking USA elections. And poor “Lil Rocketman” is too small to look over the railing.

Well, half way done with my scene had to blur the background out it looks good getting ready to start on the other half.

How narrowly are we supposed to define “soviet”? Or “Soviet Propaganda”? This could mean specific artistic styles favored by the Soviet Union from 1922 to 1991, yes. Or it could include awareness that nominally post-soviet Russia didn’t (and couldn’t) replace the entire Soviet government, or even most of it, and therefor circa-current Russian influence easily comes under the heading of “Soviet Propaganda”.

, but i decided to go with historical data from the past and up untill now, I don’t know if I’ll be able to implement all I want to but I’ll try.

Know the feeling! Busy weekend for me without this, but the idea clobbered me over the head and won’t let go.

yes, poutine is a dish here in Quebec, comprised of french fries, melted mozzarella and gravy.