And… the winner of Weekend Challenge 964 with votes from 33.3% of the voters is… mali_zweipunktnull!
As we have a tie between entries (mali_zweipunktnull, parclite), the earliest submitted pure entry wins. 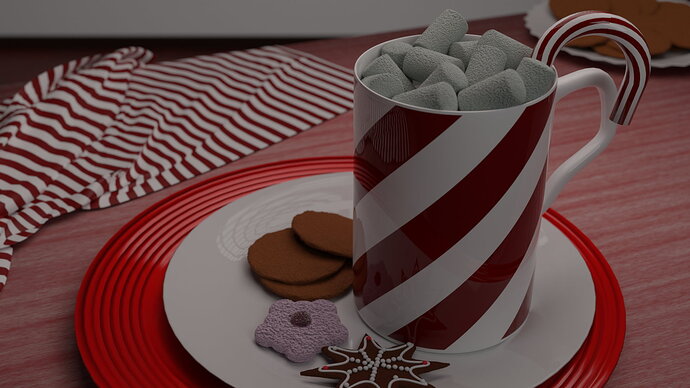 Contratulations @mali_zweipunktnull (and @tomwil). Nice render! Maybe somewhat more contrast in the lighting and I wouldn’t have come close.

That was really unexpected and then I was only lucky enough to have submitted a little earlier.

I’ve only been with Blender for just over 3 months and it’s a lot of fun. I suggested 2 topics to Helge, let’s see which one it will be.

I also have to learn that some objects in the picture simply don’t have to be very detailed. I always spend a lot of time on little things that you don’t even see in the finished picture. Like the director’s chair at Hitchcock or the cookies in this picture. Very simple objects would have been enough.

But: It’s also fun to tickle out the details 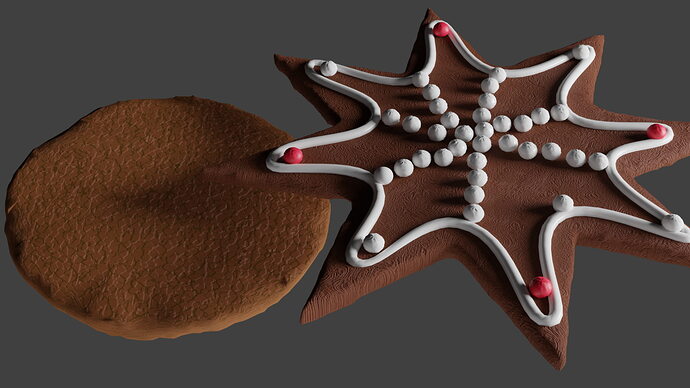 Here’s a close-up of the cookies, then the work wasn’t completely unnecessary

Let’s bate some clicks: This one will be incredible!

I’ve been watching these challenges since 2017 and participated in them up until earlier this year when I branched off to other projects. The open and pure debate has come up many many times since I’ve been here and has always seemed to begin and end the same way. The recurring problem that sparks the debate is 99% of the time a frustration with the distribution votes, or someone incorrectly labelling a project pure that people think should be labelled open.

The biggest lesson I have learned from watching over time is that it doesn’t matter. This challenge is not really meant as a gateway to blender fame and the votes do not provide that service regardless. The votes are one motivator to the true goal which is to work on projects, and learn and grow each week. The skills and knowledge I obtained from this challenge were way more beneficial to me as an artist than any amount of votes I received. I admit there were weeks where I contributed more lazy open entries (that I was not proud of) but the point is that I contributed and I completed something in a week where I otherwise didn’t want to. (Not saying any of the entries this week were lazy, almost all the open entries I have seen here require a good amount of work and deserve the votes that come their way)

It isn’t advertised this way but the votes are truly a secondary reward to participation here. You can’t change the way people vote but you can change the way you feel about the voting system in general.

The open and pure debate has come up many many times since I’ve been here and has always seemed to begin and end the same way.

But instead of thinking about why this is discussed over and over again, do you prefer to do nothing?

I wanted to bring it up, I did, and beyond that, it’s not worth discussing endlessly. I will stick to my invisible, private participation.

But instead of thinking about why this is discussed over and over again, do you prefer to do nothing?

I think it is pretty clear why this is discussed from time to time. However, as long as we want to keep the challenge open for all kinds of entries (which I still think is a good idea), I simply don’t see a simple solution that would make the need for discussion go away once and for all.

I will stick to my invisible, private participation.

Sorry to hear that. I mean, if you create something, you might as well share it with the community. There is always something to be learned - and who wouldn’t like more diversity among entries? Btw. You could also enter ‘non competing’ entries, which is a great way of participating while staying out of the voting. (It can also be quite liberating.)

The intention of the categorization itself is actually great, to encourage people into model at least most of the objects by themselves and minimize third party assets involvement. The problem rises up since the category selection is entirely given to the participant, instead of being screened first by the moderator, for example. However, please keep in mind that Helge here is a one-man-show that has been keeping the challenge running smooth so far by himself, so adding more responsibilities might be not be the wisest of decision (maybe we can have a panel of moderators then?).

One possible alternative, is to require all participants to mention or list their models sources (self made and/or from third party sources), which will be included in the voting thread (just like in the open category), hopefully the voters will have enough info for their judgement. This actually can eliminate the need for open/pure categorization, should that be neccessary. In the event of a tie, the ‘earliest submitted entry’ rule can be used for selection of the winner for quick result, or we can think of yet another set of (new?) rules.

Anyway, until we can all (or mostly) agree on some new arrangements (which would be the hardest part), we have to use the current rules, with all its ups and downs, for now, while still gathering ideas/input along the way. Hope some of it will then get to see the light of day.