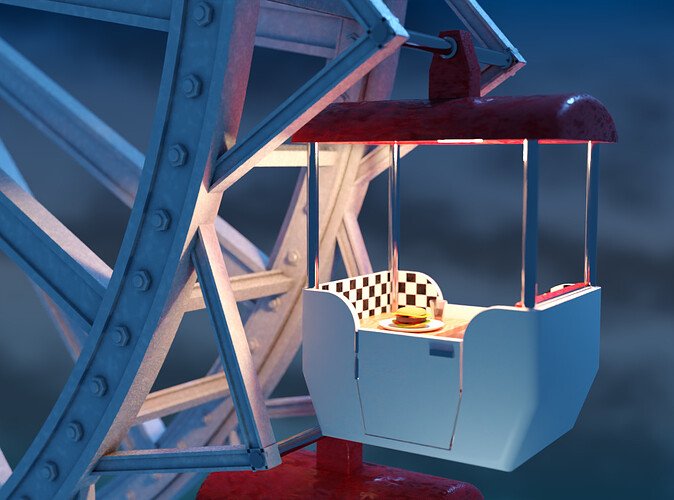 Want to see the light once more
Pure, cycles 1024samples, rendertime ~6min., opendenoised, all made in blender, the smear texture is painted in gimp, the menu is from the www and modified. Did some light tweak with ghost and glow. Used an HDRI from https://polyhaven.com/a/quarry_04

“The Baker Paper”
Breakfast Killer has found his 3th victim. This morning another dead donut was found at the ‘Flying Donut’. ‘Double Choc’ had his lower abdomen bitten off and was left to die. Coroner Quincy said: “His death was terrible. Cause his viscous chocolate filling drips so slow out of him, it probable takes about 10 minutes before he even lost consciousness.” Police chief Spencer Trilby: “We have doubled our efforts and patrols. Also we have taken special steps to get this monster.” 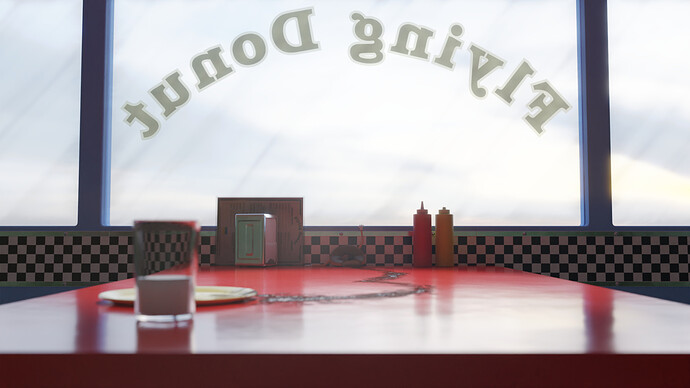 “Corner Booth”
OPEN and NON-COMPETING- I made everything in this scene in Blender a long time ago. Years, I think, not my best work for sure. I tweaked it up just now, still doesn’t qualify for competition. Just wanted to share it 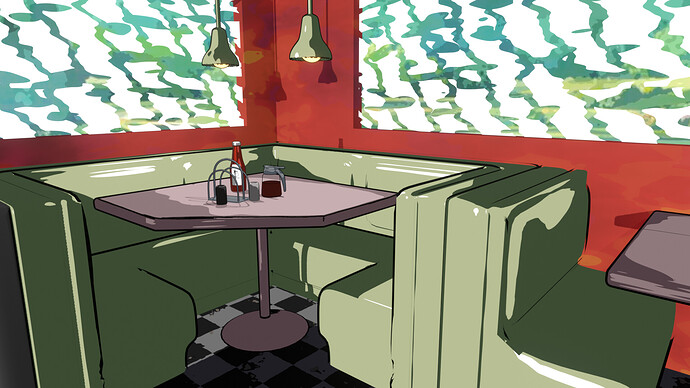 I have guests coming in so can’t play this week (and Elden Ring) but very impressive inputs. 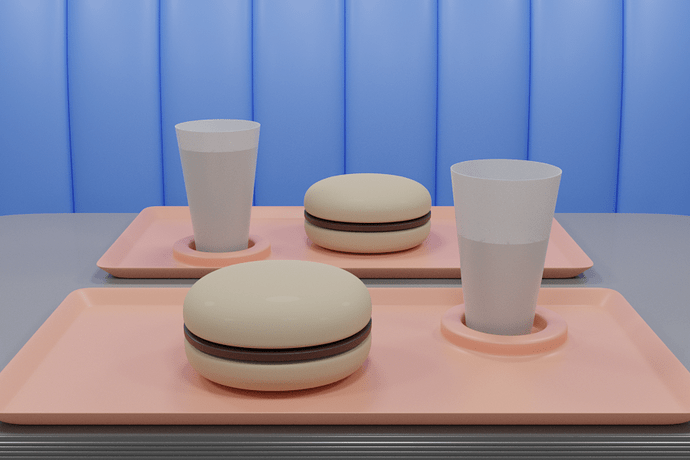 Pure entry, didn’t have the energy this weekend, we have a merger that took place yesterday. Spent all day sleeping

Pure Entry. I modeled everything by myself. Some textures are from Blednerkit.
Cycles, 500 Samples + Denoising. 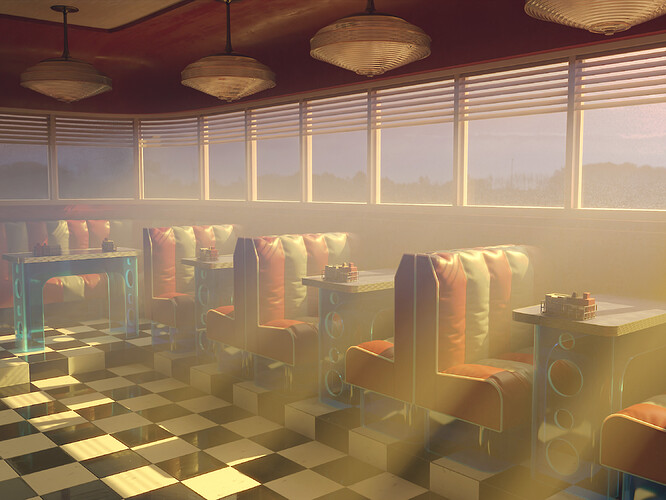 I especially like the tables - a combination of diner and spaceage.

Nothing for children’s television

But the donut is a little hard to see (contrast/light). I like his desperately outstretched arm. Looking for help, but all in vain in the end

Such a cool take on the theme

Thanks :). I wanted to make the tables glow at first, but that looked weird.

“The Route 66 Diner”
Rendered with 1500 samples and with denoising too. 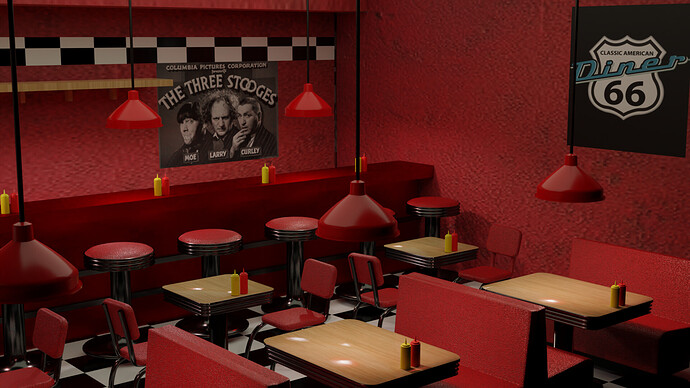 Pure Entry. This diner reminds about the classic American food like hotdogs, hamburgers and all that good stuff.

Nice Job! I like how you made the seats!

Yeah, it might be a bit to much ghost effect, i make it a bit less strong. But i like that you need to make a 2nd look and do not get the story at first glance. 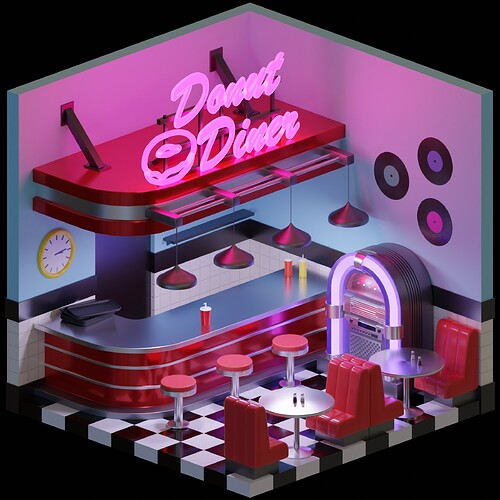 DinerFinal22400×2400 537 KB
Pure
Went for the orthographic/diorama/miniature style (whatever it’s called) and really liked it. Everything is new, except for the font, the hdri, and the cup, which is from a previous project.
6 Likes
Challenge #977 "American Diner" Voting CLOSED
InfiniteVariations March 14, 2022, 6:28pm #23

I like it! Did you get the materials from Blenderkit?

Thanks! I made all the materials procedurally, but they’re pretty simple. I think cycles is doing a lot of the work to make them look good. Also, nearly every sharp corner has a slight bevel on it to catch the light.

I actually traced over my original donut to make the donut on the sign. Originally, I wanted to use the actual donut itself but it looked weird. That donut tutorial is the gift that keeps on giving.

I’ve had constant hardware problems since Friday and my laptop crashes 2-3 times an hour. RAM defective. I still tried to build something, but it was always a fight for little progress

When I render I even have a crash immediately. So unfortunately I can only show a screenshot this time and that is also very rough and unfinished. Should be the “66 Diner” in Albuquerque when it was finished 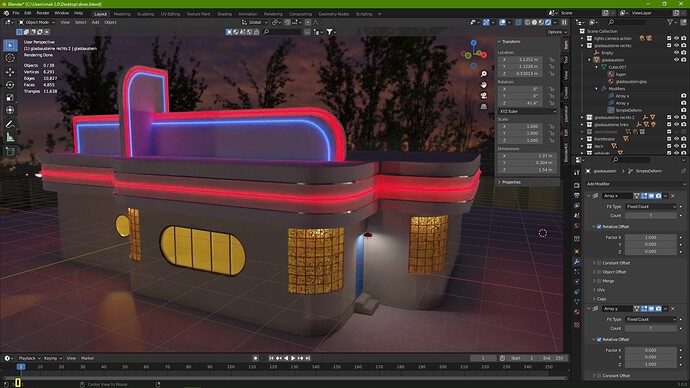 That was the model and actually the goal: