I need to use Blender (despite having no experience whatsoever), and got a lot of files to start adjusting/optimizing.
However the sources of the images used for the materials point to E:/…/…
I have the files stored in a different place (different name etc.) and I want to adjust the source for all these images.

Is there an easy way to do this?

First create/update your material for 1 object. point it to the right files.Select all others object (don’t forget to unselect the first object) and then object 1 (It should be last one) press “CTRL+L” in 3d view and select “Materials” from the menu.
This is helpful for only the objects, which share the same textures.

You can change the path/to/file source for any image in Blender as easily as typing your own name.

Simply go to the Datablocks part of the Outliner. Here’s an example:

I have two files. Both the same image but in separate folders.

I import the image from folderA into Blender.

I decide I would rather use the image from folderB instead. But I don’t want to re-import the same image and have both files linked to the .blend file. So I change the filepath for the image inside the outliner like so: 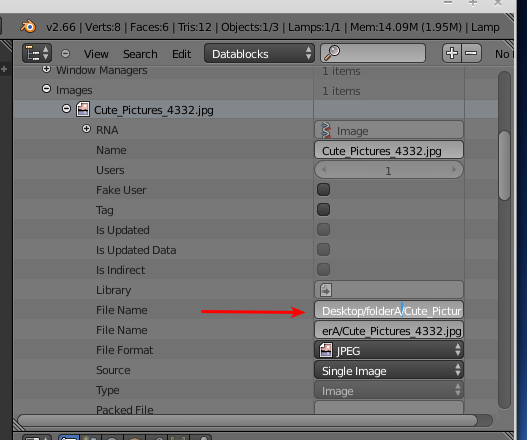 Lots of interesting stuff can be done in the outliner. Hope this helps.

@gnemonix. thanks for the info. I totally forgot about outliner and blenders Cut/paste abilities in sliders