I started using Marvelous Designer again and found a jumpsuit and simulated it in different materials, then rendered in Blender with some really simple shaders and Eevee. Making characters in MB lab. Usually I press the random button until something promising shows up, then edit if necessary. This is the most fun part of these projects. I wanted a feel like this image from Frank Miller’s Dark Knight Returns:
link to reference image

To achieve the jumpsuit image (trying to emulate the spirit of the excessive fabric folds in the Batman image), I set the fabric in Marvelous Designer to super-lightweight presets, then tweaked it be a little more lightweight than that. I increased the warp/weft size on the avatar to make it have a little extra fabric so it wouldn’t be stretched tight over the model in any way. Then I played around with line sets in freestyle. Eevee, principled bsdf shader. Still not that happy with the hair. Maybe it needs to get more narrow and more transparent at the end, or maybe I need to go with something much more stylized (a few large meshes, some small hairs for effect mixed in?)

Does the Batman image have any postwork for the inks, or is that all Blender? If so, that is one of the most convincing comic style renders I’ve ever seen.

Sorry, I tried to make it clear the Batman is the reference / inspiration image from Frank Miller’s The Dark Knight. The jumpsuit is what I made based on it as a prototype to see if I could replicate the ideas that image inspired for me. The concept I’m trying to get across in the post is that if you want to make that kind of look, you can take cloth in simulation, make extra light weight and a bit too much of it (to get the excessive folds), and finally use Freestyle. I felt that including the reference image would help people understand the concept. I’m not trying to imply I made the Batman image! Though I hope soon to be able to make something similarly compelling.

I’ve made a few edits to clarify it further in the original post. If it isn’t obvious enough I’ll delete the reference image, but I feel that then the post gets a little unclear with what I’m working towards.
Sorry!

this evening i made this scene. moon is red by accident; I was (poorly) trying to use the shader to control the moon shadow angle that the sun lamp casts. but it looked cool. The buildings, moon, and procedural sky are from blendswap. It took me a couple hours to find the assets and then mess around with the cameras, color, and lighting to compose the scene. I didn’t have and end goal in mind; I just went with the flow.

Don’t worry, sometimes I skim things too quickly, particularly when trying to multitask. The style of the wrinkles in the two images looked similar enough from a distance. Concrete texture modified from http://www.blenderinsight.com/material-for-blender-2-8x-cycles/nggallery/textures2_8/Concrete-Materials-for-Blender-2.8x
And then modified a bit (wanted two scales of chipping) Got access to https://copa.apps.uri.edu/ and did a little Marvelous Designer practice with some late 1800s patterns. Quick render to test.

Everybody is really into the toon shader with the Shader to RGB + color ramp nodes (with ramp set to Constant) but I think it doesn’t work that well. With anything reasonably geometrically complex that has an organic shape, the lines of the color ramp shading end up looking kind of bad, as though it was put through a cheap Photoshop filter (“Posterize”). I usually change the Color Ramp setting to Linear and smooth that line out a bit. I’m thinking about a few other ideas for shaders.

I was messing around trying to create an exterior I needed for a story, but then I got distracted when one of the test renders felt like an anime background, so I took a detour in that direction. I started with this Blendswap and just let it wander from there: I first focused on doing different lighting for the scene and that’s when I had the anime background idea.

I was adding materials to all the shipping containers but it was detracting from the look and feel, so I took a step back, removed a bunch of stuff, de-bumped the stucco, removed details from the air con, and did a lot of work in the compositor. The key parts to the look are the right amount of defocus/blur, bloom and glare, and then a kind of flat desaturated and not very distracting color scheme without too much dynamic contrast. I just eyeballed it until it felt right (or actually until my cats reminded me I had forgotten to feed them dinner and it was already past midnight). I’ve tried a number of things recently–polygon hair, HairNet, HairTool… everything left something to be desired.

I like particle hair but I hate editing and combing particles.

I came across this video https://www.youtube.com/watch?v=vu6MQC6qdRY

I made this first image as a test. I used the curve guides for the bangs and ponytail, but combed the other hair (main hair) on its own. Something wasn’t quite right and I kept crashing blender.

The bangs and ponytail were a dream to make, really easy with the curve guides. The rest of it was hand combed and was as awful a process as always. At the very end the small hairs by the ear stopped showing up properly and I called it quits for the moment, so just imagine they have children (the children hairs wouldn’t show up)…

Next time I will try to do something similar but with curve guides for all the hair, including the tricky main hair part.

I wanted a way to use physics simulations to comb hair for me, and to be able to freeze it and comb it more afterwards. Here is the solution I found.

In the example the orange area is meant to represent where the hair is not emitted, such as a character’s face.

Simulate. Play with stiffness, collision, etc. to get the hair to flow the way you want without intersections to the base mesh.

I aligned my mesh so that the default setting of gravity did the work, but you can use other force fields of course. Stop the Anim Player on the frame you like and press the convert button on the Particle modifier that will appear in the base mesh object’s Modifier Properties tab. This creates a new mesh, so hide or delete the original particle system which remains.

Use the Object -> Convert To -> Curves from Mesh/Text feature

Make sure to apply transforms of all objects (Ctrl A) first. Select the Hair Curves and then the desired parent base mesh. Then choose Add Hair From Curves from the Hairnet tab. It may take a while if you have a lot of hair with a lot of segments. 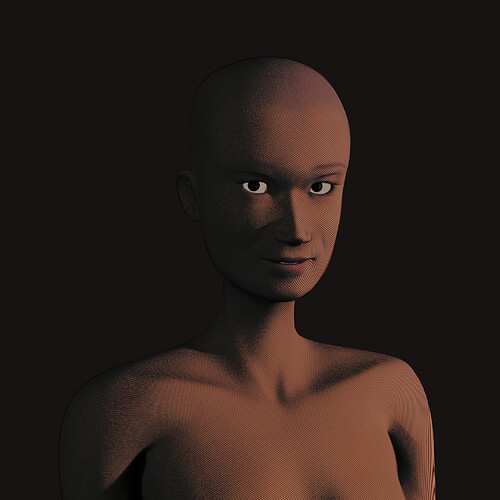 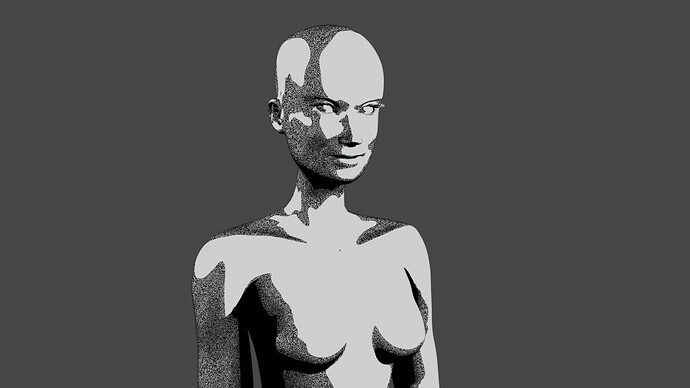 Playing around with the Inkwood shaders and MB Lab again. Nothing much. 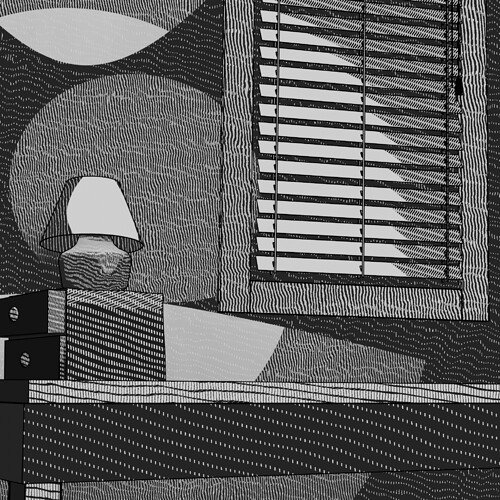 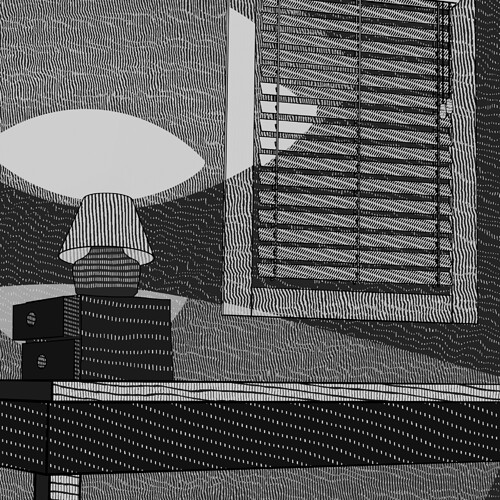 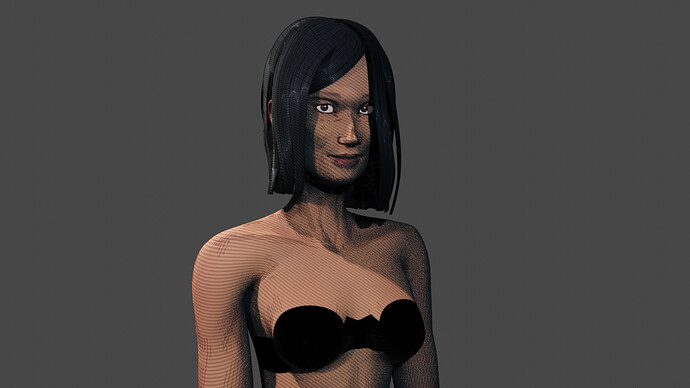 Playing around with hair tool

this video helped me a lot 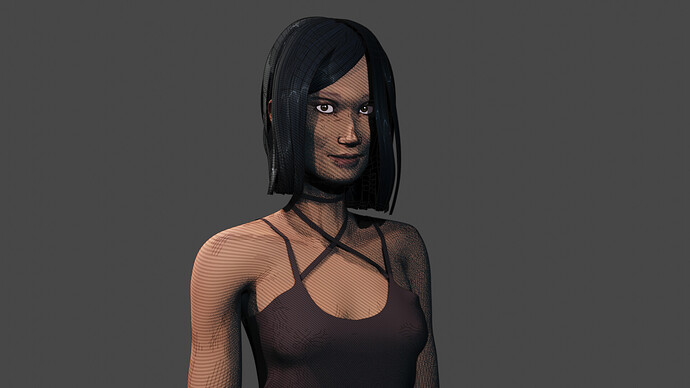 Some older work where I had been trying to get Freestyle to create a sketchy outline with spatial noise modifier.

I am still wondering if there is an easy way to get Freestyle to draw lines where meshes intersect, like the line between the lips which sometimes ends up missing.

On the elastic pants waistband, half of it is flipped inside out…oops. A mistake in the simulation.

I wish there was a Distance From Camera modifier for the spatial noise. I’d like more noise closer to the camera and less noise further from it. 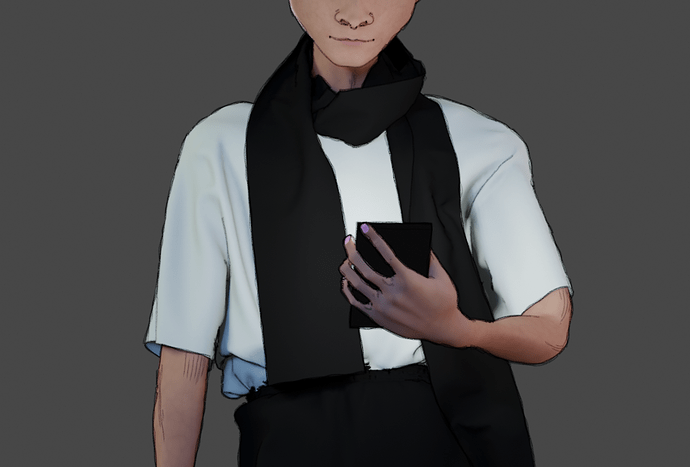 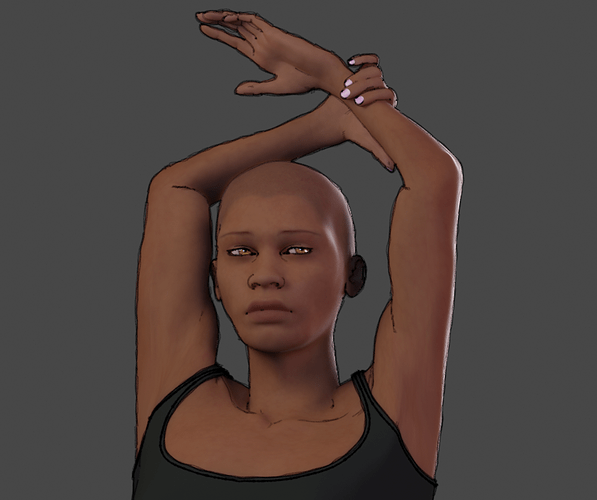 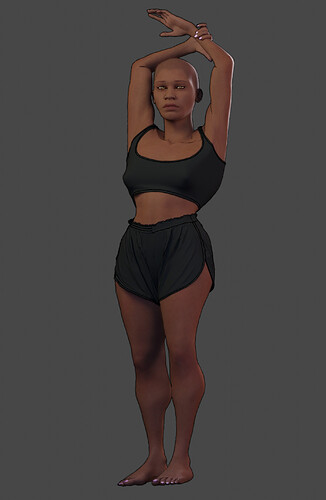