Currently, I am working on a character that is to be used in a game engine. It is a bit early to tell the style of the engine or any of the limits, but I would like to start on it soon so we can have some working assets when we get a dev team.

I thought I would log my progress here, so I can gain advice, comments, and constructive criticism to help me along. This is my first time doing something in this style, so please help me out! Critique, comments, feedback, tips, and advice are always welcome and encouraged. I am not a beginner at the tools, software, and shortcuts, but I am a beginner at the art and stylization itself.

The first characters are Lares, which are very similar in appearance to gnomes or dwarves. Their colors are composed of light oranges, dark blues, and light browns.

I decided to take it down a step, and go low poly. This has many advantages over my previous sculpting attempts. They will render faster in a game engine, they will be much easier to deform and texture, and I think it matches the concept art very well! I took most of my inspiration from these low poly pokemon that are often used for 3d printing tests: 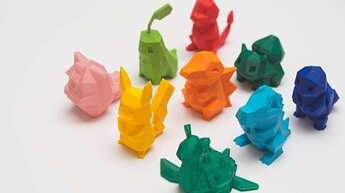 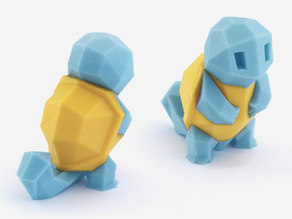 I created some simple vertex colors to help visually separate the parts and preview the colors. Later, I will want to use textures, but this works for the current stage.

Another thing to consider is the topology. I honestly don’t know what is optimal in this situation. Do I want to keep everything tris so they render in the engine properly? Or should I use quads so they deform well? Will n-gons be tolerated? Is a mix okay? Please help me out with this! Thanks!

Hello everyone, it’s been a while, and I’ve learned quite a bit of new skills since.

I’ve recently tried to give it another stab, using a lot of the techniques I’ve learned since last time. Instead of the blocky modeling, I took a more traditional game engine approach, and optimized it for:

I tried to maintain a nice, consistent flow of topology, and make sure every polygon is quadrilateral so it subdivides properly. It’s able to maintain a smooth shape with under 2500 polygons.

The head is temporary, as it’s topology will be a little bit more complex. Getting the nose to stick out properly is a lot more difficult than it looks.

I’ve added some temporary eyes to help visualize where they go, however, I actually like the idea of 2d animated eyes on a 3d face. Rather than trying to rig and animate awkward 3d eyelids, I think it may be better to animate a series of expressions as 2d frames, and use those. After all, it really matches the reference and gives it that cool 2d look. 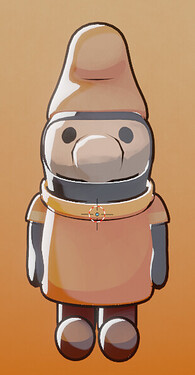 This little guy is super cute, I like the new look and I think you’re doing incredible work so far

Thanks, I really appreciate the compliments.

Honestly, I find it amazing what revisiting a project after half a year of practice can do.

I also find it kind of creepy looking at the earlier versions.

This is awesome work. Much, much improved over your last rev.

The new topology is much better. Well done!

It also looks cuter. Fortunately these days your art style can pretty much be anything, you no longer have to go for super blocky low poly because of technical limitations (though you can, if you want to emulate that style, but with better topology).

Very true, @piranha4D. My original mistake was changing the art style because I couldn’t find the proper workflow. This was a poor solution, and just made the problem worse. The real solution was to find a different workflow. Rather than deviating from the concept art to “stylize” it, follow the styles in the concept art, and only make changes that are absolutely necessary.

After all, that is what the concept art is for in the first place.

It all sounds obvious, but it sure took me long enough to figure out.

That being said, the engine is for educational purposes, so it will most likely be run on student’s computers. I have to make sure most people can run it with moderate graphic settings.

I gave the head a topology that better fits the form and is easier to subdivide. I also set up a simple eye rig with a couple of empties. It’s not ideal, but it allows me to start visualizing expressions and such.

I realized that when using a solidify modifier on the coat, hat, and pant legs, 90% of the interior faces aren’t required. So naturally, I deleted them. Now it’s just under 9500 polygons with two subdivisions. I believe this is a fair count for an NPC. There’s a few more details I’d like to add, but those belong as textures.

Next I should apply the subdivisions and start unwrapping, but first I need to get over my case of non-procedural-phobia. 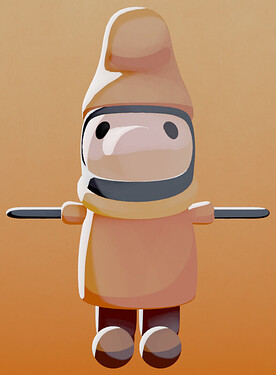 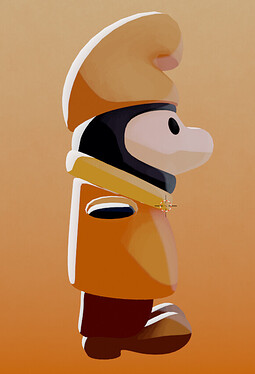 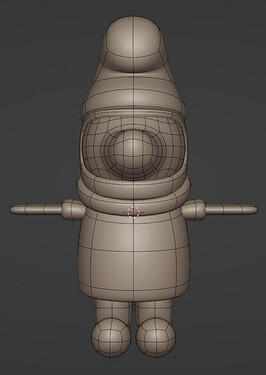 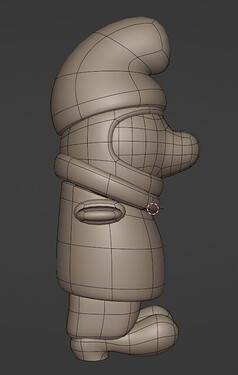