I was wondering if some of you guys out there could give me some honest feedback on my character model so far. I am pretty good at modeling non-character elements, and am trying my first attempt for a realistic head for my main character of a game. I started with a reference picture and have been just sculpting it with use of edit mode of course along the way. I didn’t include the reference because as I modeled, it became less and less like the reference in minor ways, so instead of going for an identical look now am just using it for “sort of close” references to the head and such.

I know lots of the realistic wrinkles on a human face are not there, such as the crinkles of the brow, eyelids, chins, creasing on the lips, ect. I have a pretty okay idea on how I will go about adding those, but I am more concerned to get the base main elements together.

-Tear ducts and proper eyelids. I made these spheres and divided them in half with the idea of just rotating them as the eyelids, but it is turning out to not work to well, and I just am in general having a hard time getting good looking ducts in there. Any advice on this?

Of course I want criticism to become a better modeler, so any other tips and advice would be great!

I have added a body to my head, as it seemed the humane thing to do. Unfortunately, I think it looks weird. Kind of alien, but at the same time I am a hard critique on myself, and being my first real attempt on a human model I am not sure what weird looking areas will sculpt out nicely, and which I need to go back in and pave over with all new mesh first.

What input do you guys have? Note this is for a game model, and we will not be allowing gamers to go and free-ball it, so the pelvic region looks a little weird because nobody will see it. I have outlined with the gp where the perma-undies will go once the body is more complete.

I am interested also (even though this is starting to get away from just the modeling aspect) if you guys would think a model like this could be rigged and stuff now, then I would easily be able to go in later and sculpt in all the fine details like muscles, better hand and face details, ect. and the rig/animations would still all work well enough?

I think you have a good start here. You need to apply at least 1 level of subdivision to give yourself something to work with. I played with your model in sculpt mode and it just needs a little tweaking and smoothing to start looking good.
tweak.blend (1.83 MB)

A bit confusing. Are you sculpting this or are you mesh modeling it? It looks stylized but realistic was what you were after? 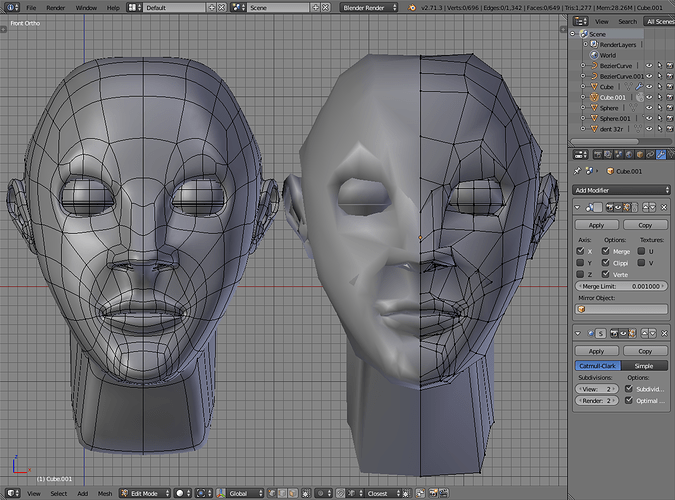 It looks as it was modeled with subdivision applied to the control cage, showing the subdivision result on it instead of real vertex placement, which is not a good idea. Should never do that while modeling the major forms. Reason for that is that you can end up with a mess which the subdivision result doesn’t reveal: with it on everything looks to be in order (left) but turning that off, it’s completely different story. A lot of intersecting geometry, concave quads. The ear is even worse.

Showing the actual vertex positions is also more predictable: putting two vertices/edges next to each other results in a hard corner/edge. With subdivision result there is a hard corner but the wireframe doesn’t show that since everything is smoothed out.

If your workflow is to first sculpt the head to get the form, could do it but should only focus on that. Blender has two subdivision schemes available for sculpting: dynamic topology which triangulates the mesh and tesselates geometry to make the form as you sculpt, and another is multiresolution modifier that uses same subdivision algorithm as subdivision surface, but also saves sculpt data on each subdivision level.

After sculpting you would do a retopology pass to get the optimized structure for the sculpted form. Realistic heads are hard enough even for experienced modelers, mixing mesh modeling with sculpt tools is not something a beginner should do. Breaking form building and topology to their own steps is a good workflow and more clear also for less experienced user who might not be comfortable with sculpting nor topology.

He should include Mythbusters style warning in his tutorials, “don’t try this at home”.

Yeah what Ja12 says is true about breaking up the process makes it easier to focus on either form or topology. My point was when starting out you can be too critical of your work. A model may look a bit blocky and undefined but just a little bit of sculpting can really make the difference.

The “sculpt the forms then retopo” to obtain a nicely formed base mesh is a very good idea because sculpt makes easier to build forms than having to place vertices by vertices manually.

By example you’ll stop sculpting (dyntopo is my favorite method as i can start from even a simple sphere like in that example) when you think you have a solid base without needing to really go indepth with details and allowing you some mistakes that you don’t need to fix as all that is important is the forms. then you’ll retopo and try to make your loops nice and clean, so the base does not have any messy overlap A bit confusing. Are you sculpting this or are you mesh modeling it? It looks stylized but realistic was what you were after?

I was sort of doing both, I would pull out a few faces for the ear, for example, then sculpt in the detail and refine it in edit mode a bit to get it looking pretty good. Mostly just been using grab/smooth/crease, no other real sculpt work has been done to the model yet.

The body (In the updated original post and this post) I used edit mode to make, because I was struggling with just sculpting it.

As for working with the edit cage on, I know it’s a bad move because it misrepresents what your mesh is actually doing, but I had somehow turned it on without realizing it and had gone to far.

And yeah, the topology is not the best right now, but it also was not the 100% focus. I went into it trying to just make a realistic human with the idea to retopo and bake it onto the low poly version. I was paying attention to my topology a bit, defo trying to not have N-gons or tris, but was hoping to more just clean it up once I was “done”.

Thanks for your guys input so far though, I know it is a long still to go, I have updated my original post. If you guys want to have more critique of the updated blend, would appreciate the feedback!

Or if you don’t want to scroll up, updated blend:

If you want to make realistic human, you should use front/side/etc… picture references to get proportions right, the same as artist of old used real people as model to pose for their painting.
Only very experienced artists can do realistic human without references.

I actually did use references (myself) and I tried to stick with them as best I could. My camera equipment was, let’s say very poor, so following them precisely was not possible. I used a front/right/back set of pictures as best I could. In the future I will defo ether find some high quality ones online that are open to free use, or I will just try and get a better quality picture from home base.

I just have not included them in this forum since it is me standing there pretty revealed.

One of the difficulty when taking yourself photo is the lens angle, see there for an example of what i mean, looks at how very different the lens of the camera will make the picture reference to be :
http://stepheneastwood.com/tutorials/lensdistortion/index.htm

You may want the lens to be at least 100 for using it as a reference for modelling, so the face is not deformed by the lens angle being too low , influencing the modelling badly.
With a reference picture that has a good enough lens angle, it can become quite workable to keep proportion good when modelling.