I’ve been asked by a local charity to create a poster for them by Friday (one benefit of the 3 hour challenges i’ve been doing is that this actually feels like lots of time). This is the first ‘commercial’ work i have ever done, so feedback would be appreciated.

The charity works with vulnerable women in an economically deprived area. They are planning a ‘sleep the streets’ night where all the workers and volunteers sleep in a car park over night.

I have been given a very rough idea what they want but have been given a lot of artistic free reign. They would like a bed on the street / car park with tower blocks in the background. generally an urban feel.

First step, block out the scene… 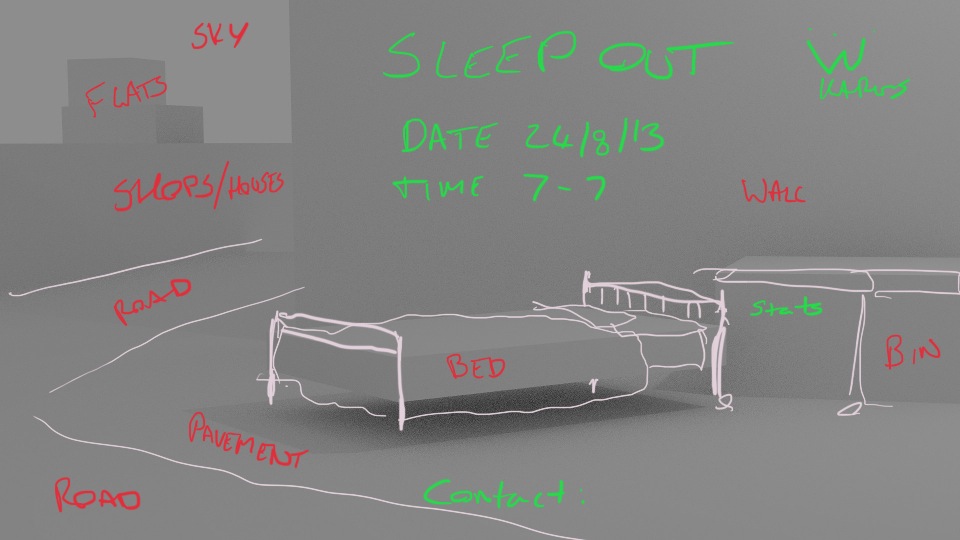 Sounds great, good luck, I’ll offer my critique as best as I can

One suggestion is that you could have the words ‘sleep out’, the date and time like imprinted/graffitied on the wall or even chipped off out of the wall.

Whatever you do, good luck, I’m sure you’ll do great

Great minds think alike mattfrank, i was planning to use graffiti and posters

Graffiti on the walls? The back of a car visible in the street on the left? Warm lit windows for the houses at the left? Just to give some contrast … And of course just humble suggestions.

Ive done the wall and the pavement. I’ve also made a puddle for the first time. (just because its for someone else doesn’t mean i can’t experiment. 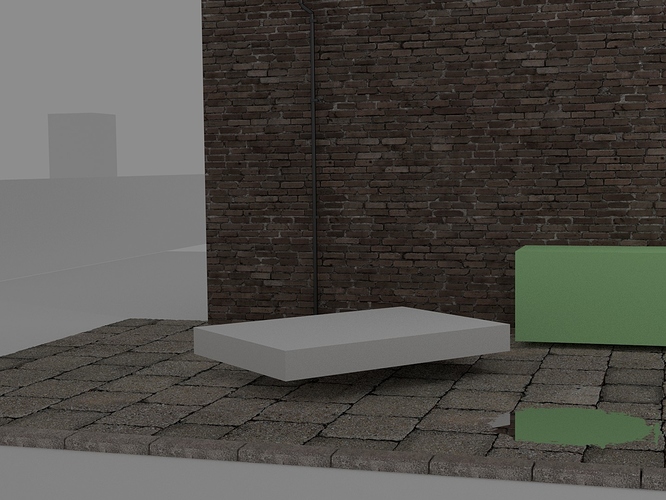 Starting to get a feel for it.

may need to tone down those blocks of flats. THe brick wall in the background is a placeholder that may stay depending on how much time i have. 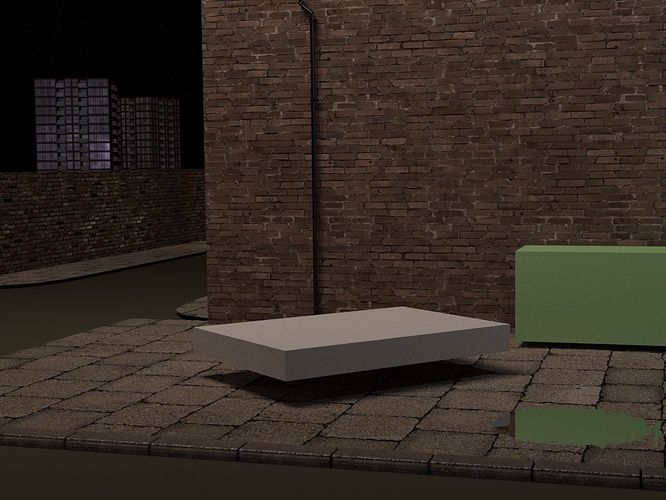 Hm, did you think about the lighting already? At the moment it is lit too evenly. Furthermore your second image somehow gave me the idea to add some mist in the background.

Oooh, i like mist. i’ve never done that, but may give it a go.

I’ve not lit the scene, i just added the world texture for reflections and added a slightly yellow mesh light so i could see what i was doing.

I’m going to stop there for the night.

I think ill focus on the bed and the sheets tomorrow, then try and pull it all together on Friday.

Cheers for the input guys. 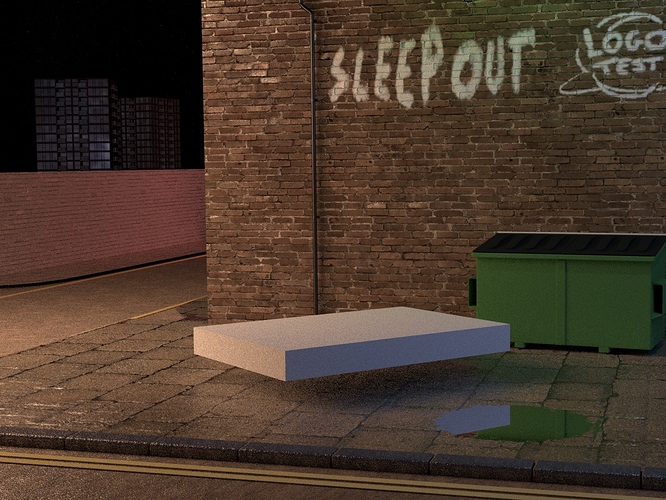 I think ill focus on the bed and the sheets tomorrow

Well, in our part of the world it could be time to focus on their real equivalents in the very near future.

Well done and good work so far. The glossy wetness from the recently rain added a nice touch to it as well as the graffiti did.

It’s coming together really nice Monk. I really like the graffitti idea. It looks great on your test. Something about that puddle bugs me it seems to reflective to me or maybe to thick.

Since this is a still, I wouldn’t be afraid to utilize some 2d elements if needed if it can get you the results your after. What resolution are you going to make it… Is this going to be a digital poster or a printed one?

Cheers guys. I may use some 2d stuff for some of the text. I think it is going to mainly be a digital poster, but some may be printed.

Modelled the bed and started to play around with the fabric, it’s not something i’ve really done much of so i’m fumbling my way through. I’ve even turned on the dreaded ‘sculpt mode’ (shock! horror!) to tweak it. I really must learn to sculpt soon, it would open up so many things… 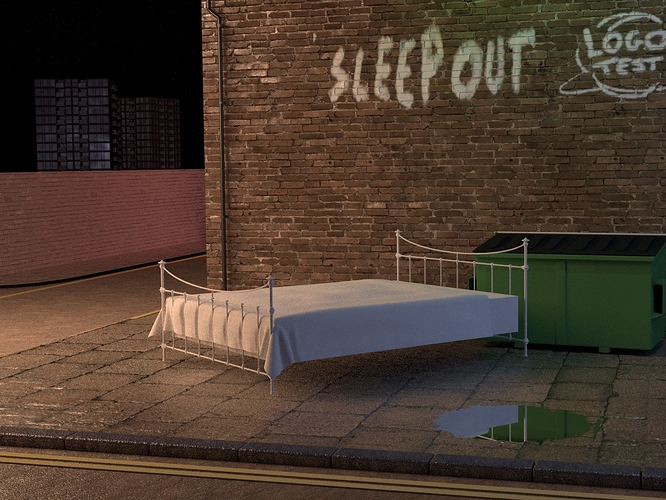 Right, time to texture that bin until it doesn’t know what hit it… 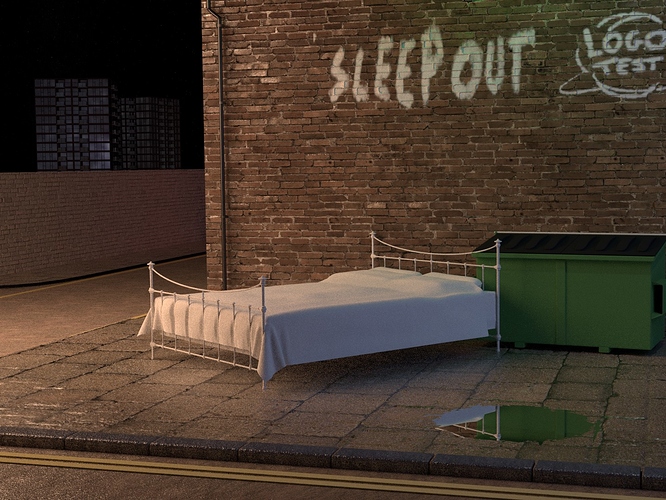 The bed is well done

I think you should reduce the reflectivity of the puddle as Harleynut mentioned. I have used a mix of glossy and transparent shaders for the one in my harbour.

I think you should reduce the reflectivity of the puddle

Yep agreed… . bugs me everytime I look at it

In some ways it seems out of place because if you had a puddle that big, you would think there would be many more as well.

The modeling on the bed and frame look great. The cloth looks pretty good, but maybe tweek the mesh on the bedspread all along the visable long end hanging down. I’m looking at one now, and they seem to have lots of ripples. Have you experimented with something other than white for color for the spread?

Minoribus and Harley: You will be pleased to know that i have addressed the puddle issue. I’ve also started some texturing. I may well change the hem of the duvet, but i was thinking of maybe putting some writing on it, so don’t want it to be too creased - i’ll do something with it…

How does the Logo work? white circle? or not? 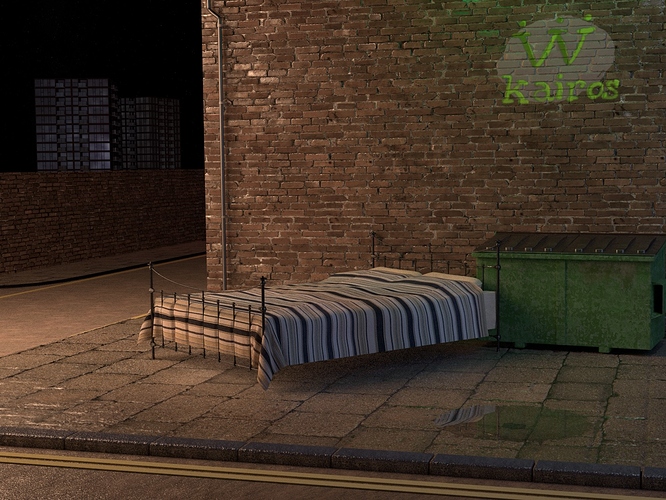 Could you show/tell us how you did the puddle?

Great work so far, looks incredible, and I think it would look better without the white circle

EDIT: I also think you should make the duvet look thicker, I’ve never seen a duvet that looks that thin, it looks too much like a tablecloth