I’ve been working on my latest render and I’m looking for some critiques on how to improve it.

What I cannot get right is that scythe. I’ve placed it around the whole image to get it to fit but I’m thinking of removing it. Or so to say “Kill my Darling”. Also got a few notes like adding bump to the playing cards and poker chips. But nothing big.

Anyway, would love some critique of what ever comes to mind when looking at it. 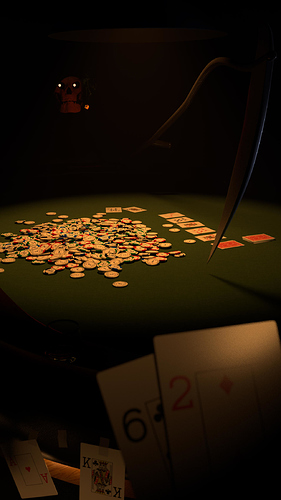 I like the texturing you have going on but for me the storytelling is a bit hard to follow. I looked hard and made out that the subject is cheating in poker to avoid being killed?

It’s a cool render, I’d keep playing with it, death looks a little too much like a toy robot. And I know for a fact that the cards are not uv mapped properly. Poker cards always have the value (and a pip) in the left corners so you can peel 'em back without lifting the cards.

What if some of the chips are turning into red hot lava, and starting the singe the felt and burn downwards, causing smoke that swirls around poker death?

Or, the cheater cards, taped below, are 66 and there’s a six on board for a set.

It is, as Photox said, a play with words. Cheating death is the story but there’s also some irony in it if you look closer.

Thank you, will change the card layout to make them look more like the standard and authentic.
I might also take your suggestion about the 666 cards.

I agree on the reaper not looking real, for me he kind of looks like a Terminator at the moment. ^^

Using the “dead man’s hand” as death wining hand or camera’s loosing hand may be a nice easter eggs for poker players.

The makeup of poker's dead man's hand has varied through the years. Currently, it is described as a two-pair poker hand consisting of the black aces and black eights. These and an unknown hole card were reportedly held by Old West folk hero, lawman, and gunfighter Wild Bill Hickok when he was murdered. The expression "dead man's hand" appears to have had some currency in the late 19th and early 20th centuries, although no one connected it to Hickok until the 1920s. The earliest detailed referen...

That’s awesome! Never heard of it before, thank you Androol!

I would personally avoid 666, because first of all it has everything to do with the devil and not death, but mainly because it’s childish (and while I’m at it not even the right number)

However, dead man’s hand is a great reference. It’s subtle, but very nice.

Not quite sure what you should do with the scythe, the way it’s put in the scene now it makes it look like it’s a crucial point of the scene, which I don’t think it is. So I think either remove it or make it less prominent, for example make it lean against the back wall or against the table or something like that.

For the reaper itself I think removing the red on his face might improve it, keep it white seeing as it’s a white skull. Or just remove the skull alltogether and try to make it work with just the hood and a black hole.