I’m getting some odd checkered patterns showing up in my hair & fur systems, which would be OK if they were only UI artifacts but they do show in the renderings as well:

Some ortho views showing that it’s present over the entire body:

I’ve done a lot of hair work, including a number of all-body animal pelts, and have ever seen this before. There are 2 hair particle systems (shorter silver-grey fur and darker longer hair), both use Interpolated Children (but it shows with Simple Children as well), but only 2 children in the longer hair and 4 in shorter. I have applied various portions of Roughness of all three types and that does not get rid of the pattern. My mesh has had both Scale & Rotation applied, and has no non-manifold faces, stray verts, or other errors – it’s my tried & true Universal Figures male mesh de-evolved into a silverback mountain gorilla.

I am using both vertex groups and an image to limit hair/fur Density on both systems, and a image for each system to regulate Length. Nothing I have not done before, so I don’t think they are an issue.

The only non-standard aspect compared to my usual approach is that the Subsurf modifier follows the hair systems in the
Modifier stack, but I have done that before as well and it did not create this problem. I did a couple of searches but came across nothing that is specific to this issue. Any ideas?

Is ‘use modifer stack’ checked? Could also be the type of style on the children (curl/braid/wave…) Does it go away if you move the hair below the suburf, that would normally be a better stack, although it is slower.

Is ‘use modifer stack’ checked? Could also be the type of style on the children (curl/braid/wave…) Does it go away if you move the hair below the suburf, that would normally be a better stack, although it is slower.

Yes, but the pattern stays even when “Use Modifier Stack” is disabled. The Kink used is a very mild Wave, but again, disabling Wave does not remove the pattern. And a good analysis, I put the Subsurf below the Particle modifiers because the density of the systems slowed rendering by a significant factor. Maybe not a good idea. I’ll have to restyle both systems to move the Subsurf up the stack, but if it fixes the issue, worth the effort. Though I know I’ve run Subsurf below Particle hair in the past without this problem, it probably was not for full-body hair/fur. Perhaps those kinds of usage are more sensitive.

Thanks for the suggestion!

EDIT: I did “Free Edit” on the short fur system, moved it below the Subsurf modifier in the stack, and the pattern does not change, though the hair distribution is of course disturbed a bit by the change in surface topology. This is very annoying! I can’t even begin to surmise where the pattern even originates, since I’ve changed every possible variable (at least, every one that I can think of) to no avail.

Can you reproduce on another object?
Shading Flat, Smooth? Normals Auto smooth?
Too much wondering… a test scene?

Reproduce? Not on a simple UV Sphere, using the same particle system parameters as the short Fur system, at least not to such a degree. I could detect a very faint pattern on the hairy sphere, mimicking the wires of the mesh. The pattern on Kong follows nothing present on the emitter mesh: 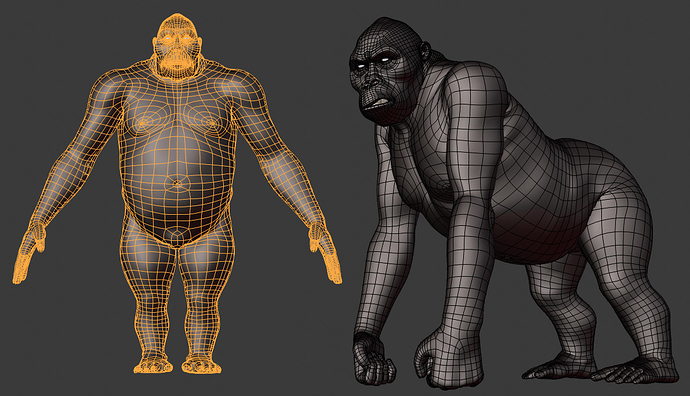 Shading: Occurs both Smooth & Flat shaded, no major change in the pattern though as expected the hairs do shift a little

Normals: Auto Smooth has no effect either off or on. Same for two-sided.

If by “test scene” you mean post a .blend, I’m afraid it would be too large even for paste-it.org, currently the file is 235Mb+. I might be able to make a stripped-down version.

Yup, just part of a mesh that can serve as an example. 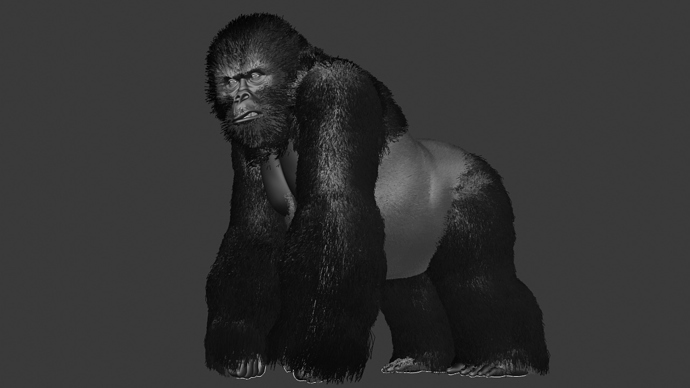 Turns out it was the Kink parameters, more specifically the Wave>Amplitude value. I thought I had checked this but apparently not, or at least not with the current Hair system status (Parent strand count, Children count, edited in Particle Mode, etc.) Anyway, a second run through all the influences caught the culprit.

I use Wave a lot on head hair systems, and have never seen this, but I guess in fur-type systems covering large areas, the result is sensitive to the ratio of Wave Amplitude to the Hair Length. Too great an Amplitude & the pattern shows up. Personally I consider this a bug, as such artifacts should not occur under any circumstances, but at least there’s a cure.

Thank you all for your suggestions. It’s been a long day but I can now rest easy while I render out a new pic of the King :D.