After an embarrassingly long time without pushing my skills to their limits, I decided it was time for a serious still render. It’s mostly a combination of unfinished projects I had lying on my hard drive (I had a lot to pick from…), with some new things added to tie it all together.

I actually made it decently far this time (without ever getting bored!!) before getting artist’s block, so I figured I would put it up here and see if I can keep the momentum going. 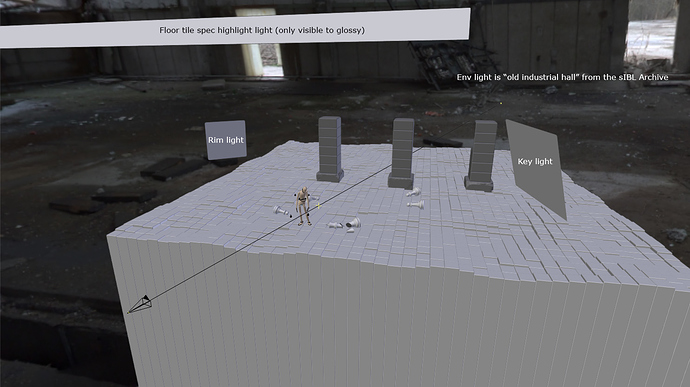 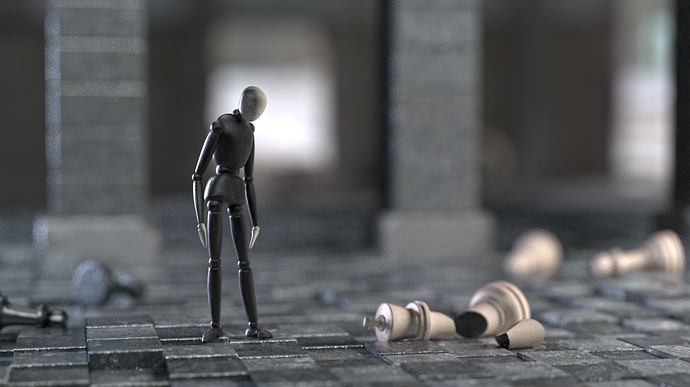 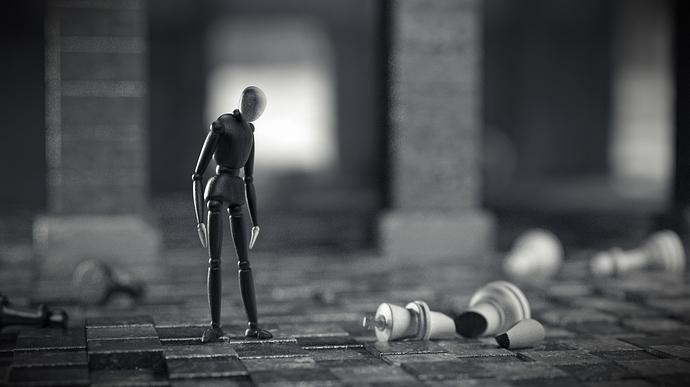 A few issues I’m aware of:

That’s all I can think of at the moment, but I’m sure there’s tons of things I have missed.

It’s looks really stunning to me. I love it and you could call it finished. i like the way of simple lightning. maybe the DoF is to hard. and use a higher samples value.
good job

Anthony, I love it! I think it’s a great concept.

I agree with SirNik though that the Depth of Field might be a bit too strong. You tend to lose focus on the destroyed chess piece too much. While it makes sense to try and draw the focus on the stick figure, you could use other techniques to achieve that.

For instance you could use your camera angle to draw the eye into the scene. here’s a few screen grabs of how you could use the pillars to draw your eye through the composition so the the stick guy is focal and chess secondary, but pull the DoF so they maintain their detail more. Just suggestions though!! 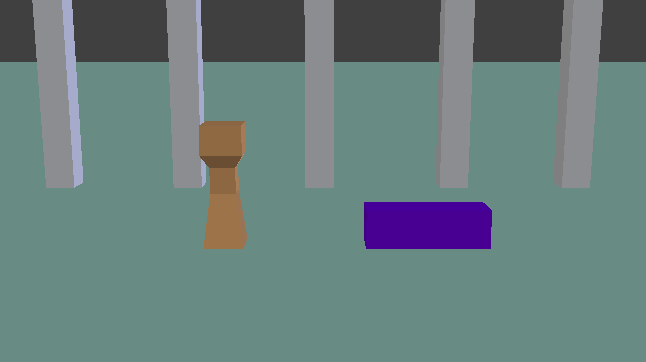 Try changing angle to use pillars to draw eye through comp. 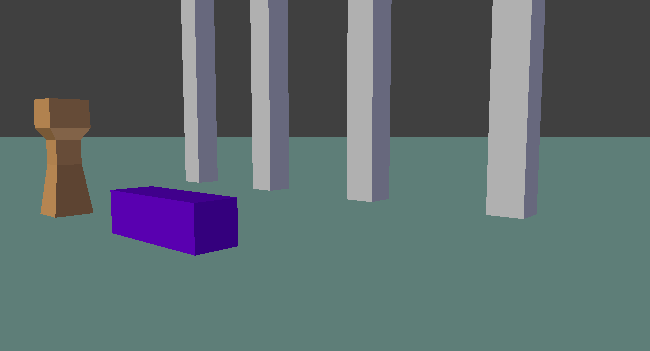 Another thing, as far as lighting goes. The scene looks really cold which you might have intended, adding a warm orange/red warm light on one side and a blue/cold light on the other side would give it a cinematic feel. Those two colors used together are pretty ubiquitous in dramatic scenes and hollywood movies. See this as an example: http://imgur.com/a/C3jUq

Just some suggestions of things to try out. Great work already! 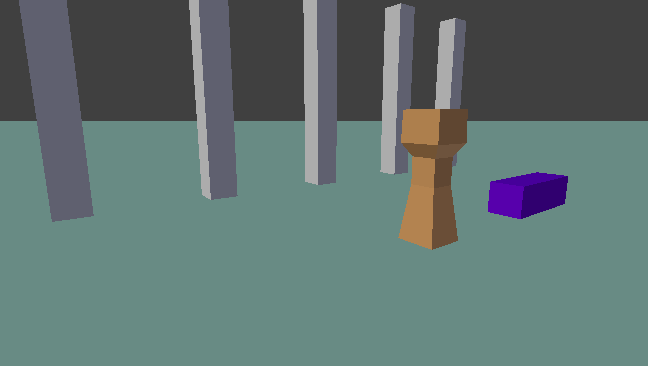 I agree with crazycourier, but don’t forget to fill the frame with the subject as well. That should help a lot. The lighting is not too bad, but that should be tweaked after your composition or else you will just have to adjust everything again. Keep it up, it’s looking good!

I think the foreground lighting is just right. The only thing I see a little odd in lighting is you have a nice light coming from the left to highlight stickman and the king piece, but the left side of the pillars is almost black. I might throw a low strength fill light in the background to soften those shadows up. Maybe even line one up with that door in your environment map since it should be casting a little more light on the pillars. And reduce the DoF. Looks very nice!

Sorry it took a while to check the thread again, busy weekend. Thanks for all the replies!

…and use a higher samples value.

For sure. I was surprised how long it was taking to render, at 70% and 1000 samples it took over an hour and a half on the GPU. When I do the final render I’ll probably just let it go overnight.

@everyone
Haha, yeah, I have a tendency to overuse DoF(I do love me some bokeh…). With this scene, I was trying to get more of a small-scale sense, but even so I still probably overdid it. sigh What I’ll probably do is close the aperture a little, and also bring the king forward into the focus distance.

@crazycourier, @Jonathan L
I played around with camera angles for a while this morning, but I wasn’t able to find any that I liked as well as the original. When I get some more time, I’ll give it a proper shot. What I might also do is try adding arches between the pillars, to see if I can frame the subject that way.

@crazycourier
I was originally going for a somewhat cold look with a warm key light, but I found it looked better in grayscale with just a subtle gradient.

@jblender
Ah yes. That is it, I think.

Hopefully I’ll get a chance to try out all the suggestions later today, and then I’ll have another update. Thanks again for the interest!

Nice work, I like the mood in the scene a lot! If you’re concerned about render time, it might help if you deleted parts of the ground block that are out of camera view (especially if it’s all textured).

You have some nice contrast with the blurry background light behind the dark manikin. But the other main element in your scene, the broken chess piece, is light wood on a light floor. It would be in keeping with the theme (chess… black and white… contrast…) to subtly darken the floor tiles underneath the broken chess piece.

I also noticed you have put all the dark chess pieces on the left side and all the light chess pieces on the right side. In a real game, the pieces would be all over the board. You might try making that blurry light piece in the background a blurry dark piece. You want two high contrast spots: the manikin and the broken chess piece.

I also suggest moving that dark shadow on the right side into the frame a bit more to keep the eye from wandering out of the scene. Right now it reads more as a border than part of a column.

In my opinion, I think the DoF and the composition are just right

crazycourier’s ideas could be ok if the pillars were more in-focus, but those compositions aren’t really appealing to me. The DoF and the silhouette caused by the bright spot in the background are plenty sufficient to draw attention to the focal point, and the flat-ish composition is quite dramatic.

I really like the lighting, especially the feel of the b/w version. It might be helpful to add a stronger rim light to the king piece though, just to bring a tiny bit more attention to it. But that’s a nitpick.

What bugs me is the king piece lying on the floor, it just feels a bit bare - perhaps just a tiny chip or two lying next to him will help it out a bit.

Also, what kind of material were you going for with the stick-man? He seems torn between a typical wood mannequin and a metal suit of armour. I’d recommend you pick one of those and aim for it, unless it was your intention to be a bit of both.

But even if you do nothing other than render a less noisy image, I’d hang this up on my wall

It’s simple, but with just the right amount of detail.

Another update, hooray! I haven’t lost the will yet.

Here’s the current state of the scene(please excuse the noise and rough color grade): 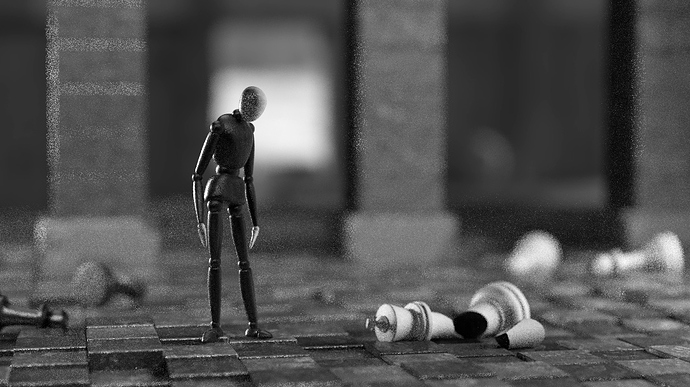 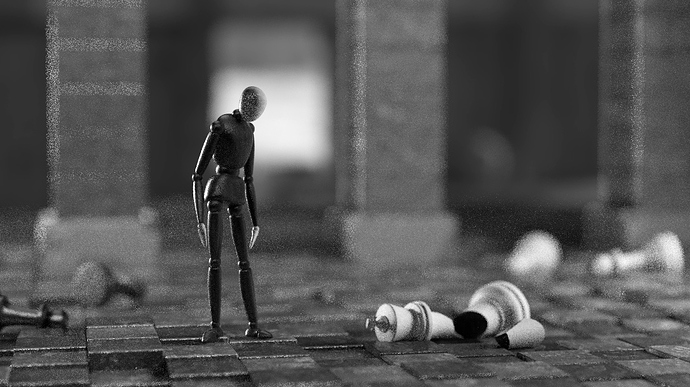