I wanted to share with you a project I had in my mind for a long time and now I have finally finished it. I know it has some flaws but I’m really happy with the result, this being the longest project I’ve worked on.

I really hope you enjoy it!

Also, here are some renders from the animation: 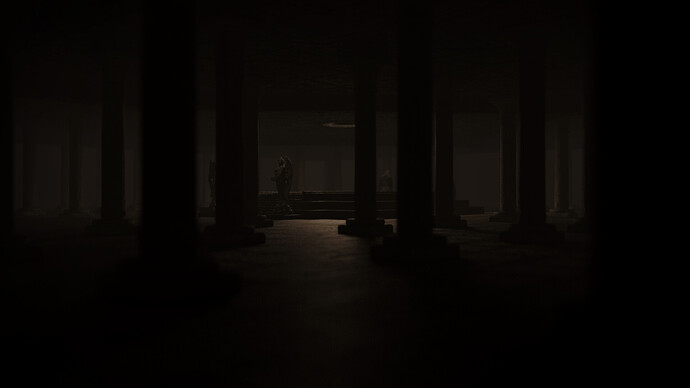 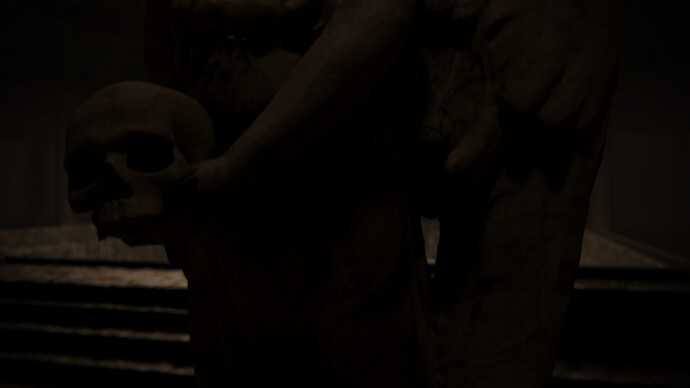 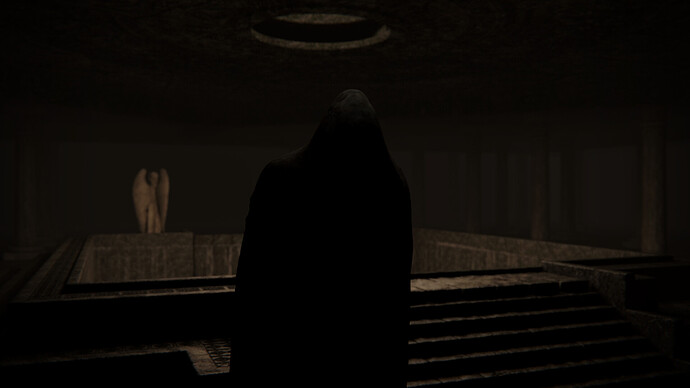 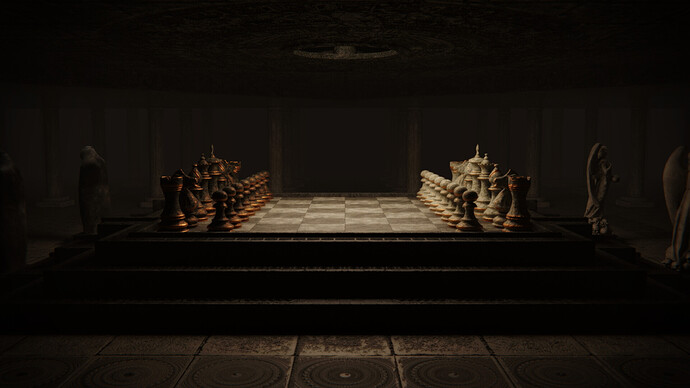 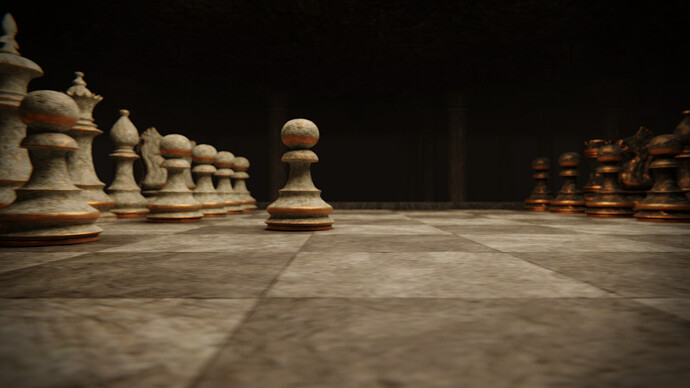 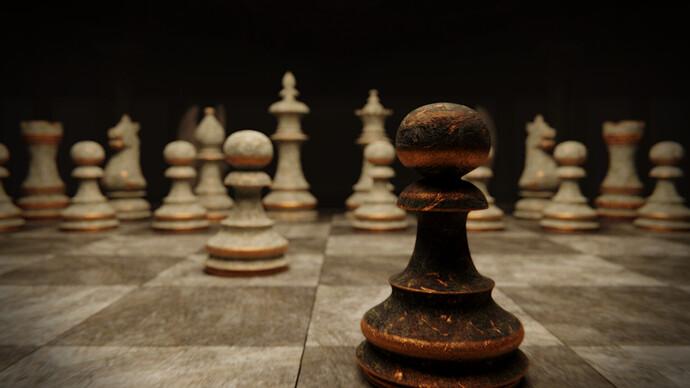 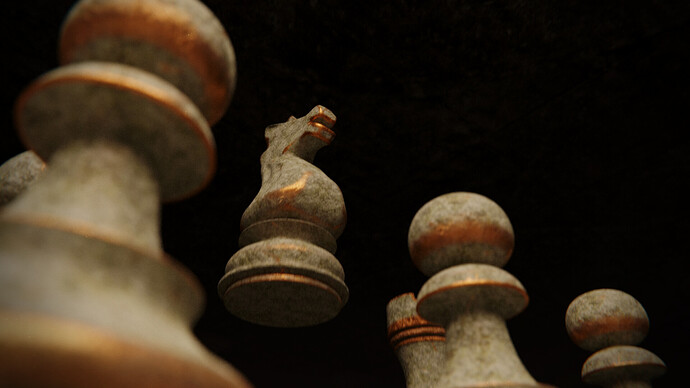 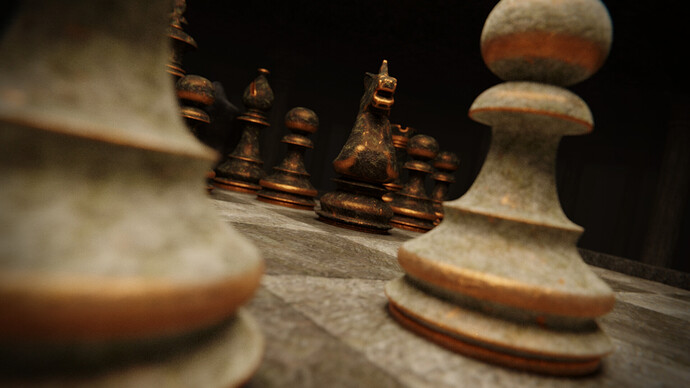 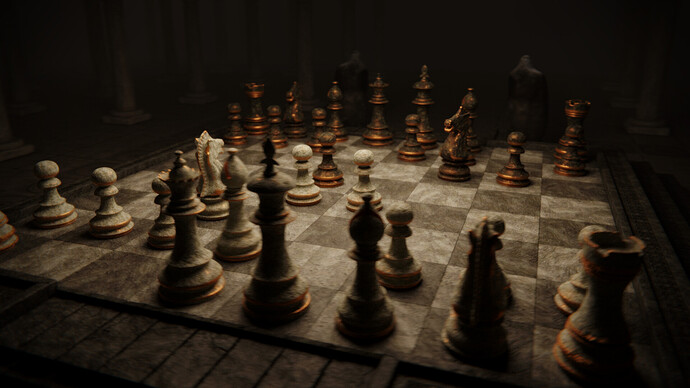 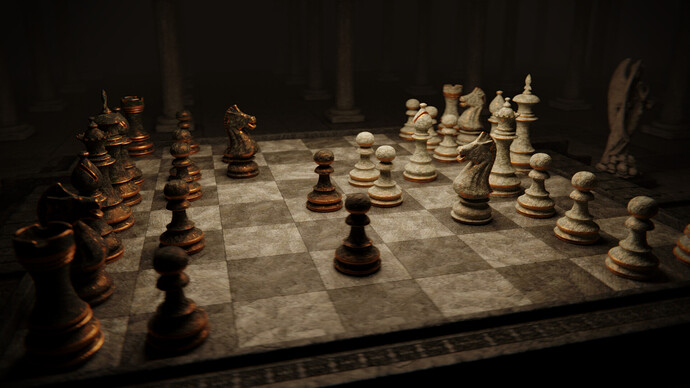 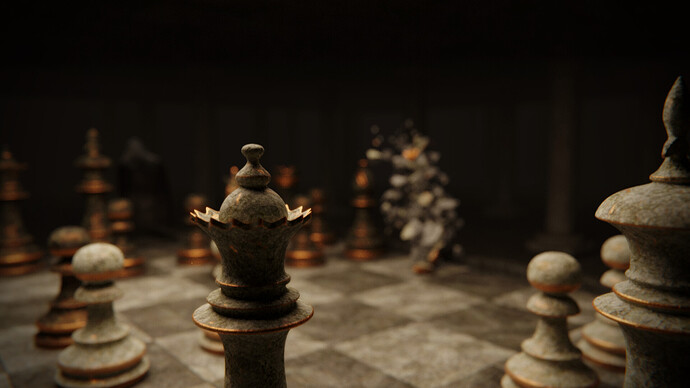 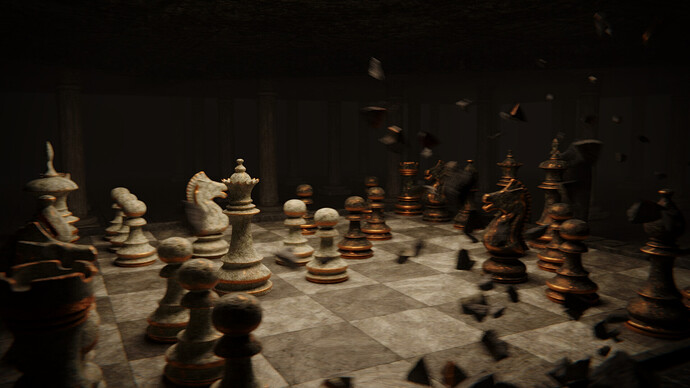 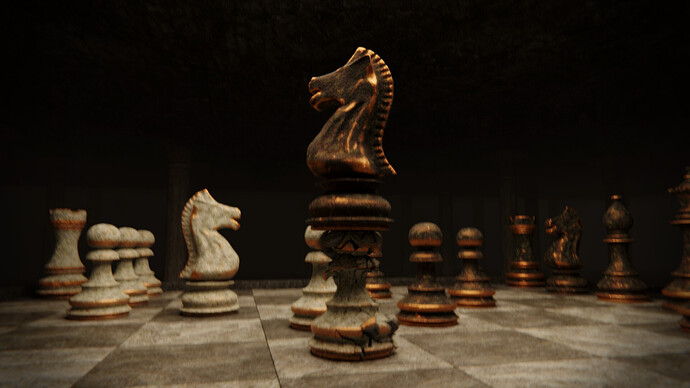 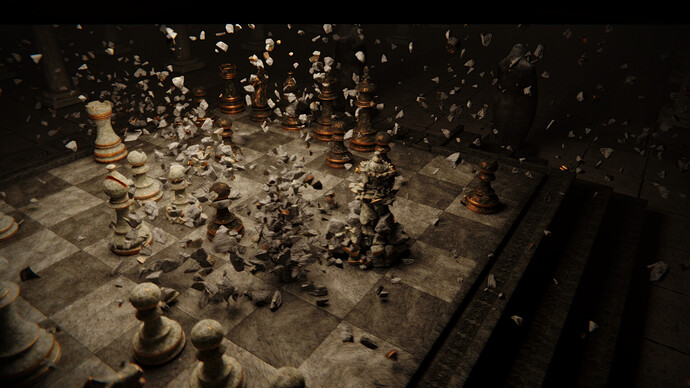 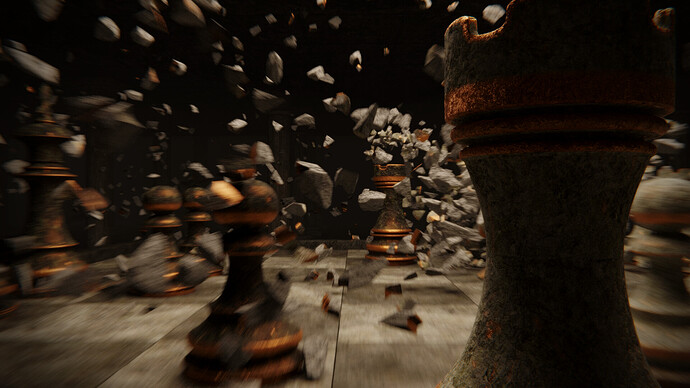 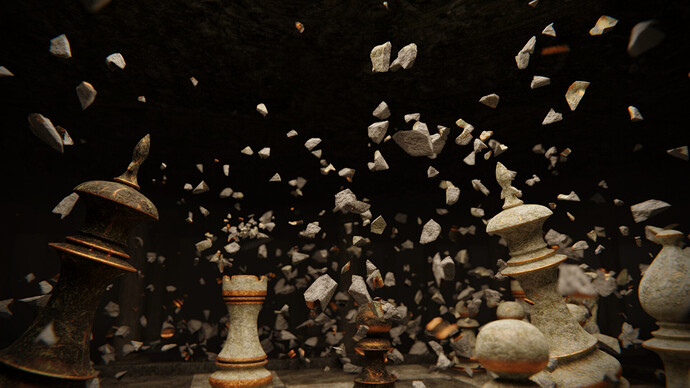 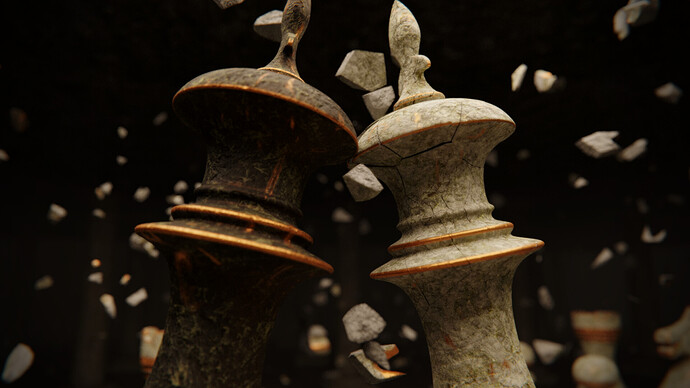 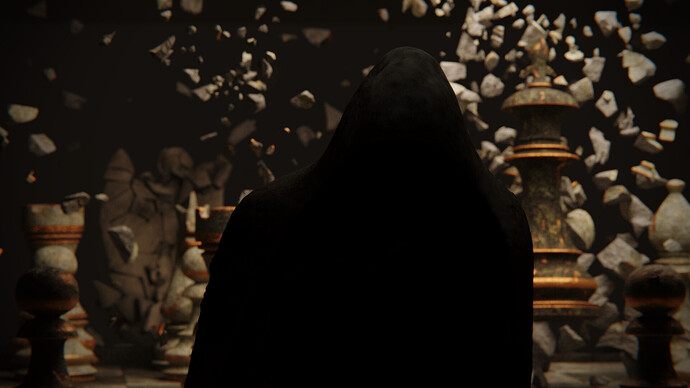 Amazing story telling and animation done here! When you are able to keep me mesmerized
for two and a half minutes you have done a good job

If it was rendered in Cycles this must have taken ages with the dark interior light. But probably you made use of the AI denoiser.

Only critique I have is: the movement of the camera is a bit standard “on rails”
I saw this tutorial lately and I think its really useful. https://www.youtube.com/watch?v=02noyOZ-yh4
Also the chess figures could need a bit more vividness i think.

Thank you! I’m really glad you enjoyed it!

Yes, it was rendered in Cycles, but I used a renderfarm for it (SheepIt, you might’ve heard about it) because rendering a single frame on my laptop would’ve averaged around 20-30 minutes and I had around 3400 of them

Also, I believe an important part is the music, to which I have no contribution, and when I first heard the track I was hooked and the whole animation started unveiling in my head (if that makes sense), so I just tried to match the scenes/ actions with the music ^^

Regarding camera movement: yes, still learning, I have no knowledge about them, for the moment going with the “gut-instinct” or “oh, I think this would look nice” and to be honest I still feel the dynamic is a bit low but I will definitely look into the tutorial you posted, so thank you!

P.S I saw you were working in aerospace. That’s funny, I work as a Design Engineer in the same field

Wonderful piece, and the music really adds to the atmosphere of the whole video.
Well done, I really enjoyed it as it is different from a lot of videos we see here.

And regarding finalizing a project, in the end we always wanted time to tweak a little bit here… or there… It’s part of the learning process and time limits we set for ourselves.

What techniques did you use for the breakup of the models?

Well, I used Cell fracture for breaking the models and then I animated the “Render” property for the intact chess piece and for its broken parts so that right before the impact the broken pieces become visible and the chess piece becomes hidden. Hope this answers your question ^^

Hello,
I really like the lightning as well as the choice and the sync of the audio which help to make the atmosphere of tragic fight. A little mocking look at game trailers?

Thank you! I did do all the scenes around the music and I’m glad it’s noticeable

I’m not sure what to say regarding the game trailers, my intent was to make it look cool, dynamic and cinematic, but now that I said that I realize those terms fall under game trailers description, but there was no mocking intended

This is quite mesmerizing and brilliant animation. Loved it. The only thing is one might have an issue with the illegal chess moves at the start. Pawns can’t move 3 squares. 2 when first starting then 1 space forward after that. Chess affectionados might freak a bit.

Haha, yea, I suppose this might happen and if so, then my apologies to whoever is a chess fan and has seen the video

On other note though, when I started working on the animation, I actually tried to replicate this famous chess match: Famous Chess Game: Kasparov vs Topalov 1999 (Kasparov’s Immortal) . Problem was, I was reaching the end of the song and there was almost nothing interesting happening so I decided I’ll change it and I guess I got to much into the “let’s destroy everything” part

Either way, thank you for the kind words and I’m really glad you enjoyed it

What a beautiful piece of art indeed, I love it!

No pawn in this movie moved 3 squares, although admittedly the very first pawn was still in full swing when the camera cut away, so it might look as if it would move still another step forward, but it did in fact not.

I just wonder, when the first bishop was beaten, you can clearly see the swap of the models (solid to fractured) on the slit/groove on its head. It becomes more lit up, or is it just textured on in the fractured model? Are such concave parts not well suited for cell fracture?

Thanks for bringing us that enjoyment!

Yes, my bad, looking at it again it is fine. Again, this animation is fantastic!

Again, thank you! And I mean it! I haven’t been doing stuff for a long time in Blender, maybe a year, and seeing all this positive feedback has given me a lot of enthusiasm and courage to continue, so yea, thank you all!

@Estajxo Yup, I noticed that too, I believe that it’s either the fault of the way the mapping was done of the gold texture (and when the switch happens, the gold texture is placed differently) or (and this is the one I believe to be at fault the most), a bad mix of events: angle of the light hitting the slit, the cracks and the material. I think if I were to use a different material(not so glossy), it would’ve been not so noticeable. I hope this answers your question

Great work. How you achevied this beautiful DOF? What’s the objects scale and camera focal lenght?

Regarding scale, a pawn normally is around 5 cm tall, but since I used Rigid body physics, I understood that the bigger the better (or stable) and the pawn in my scene is around 2m tall, so a ratio of 40:1

The DOF is nothing special, just basic stuff. I either set a distance for the DOF (like when the chess pieces are first revealed and move up) or I linked the DOF to an empty and animated the empty to wherever I wanted the focus to be ^^
I used multiple cameras (around 20), and their focal length vary between 24 mm to 140 mm (most of them are in between 24 - 30 mm and only the last shot has a high focal length because I wanted to reduce the distance between the evil statue and the angel statue in the background).

Also what helped me a lot was enabling DOF in viewport and many many test renders. Hope this answers your questions ^^

I really liked the camera movement between the figures, great job.

One minor thing that could be improved imo is the lighting at around 14 seconds when the hatch opens. At least on my laptop it was to dark to see anything. Maybe just a few very subtle light sources could help translate the scene better

Really glad you enjoyed it!

Yes, I agree that part is a bit dark, the cause of this being that I have 2 different types of panels - VA and IPS - and I considered everyone will see it differently, depending on their type of screen. Either way, I’ll keep it mind!

Oh wow, that jitter when the pieces are first coming up. Niiiiice~