an indigo render would look amazing i think. 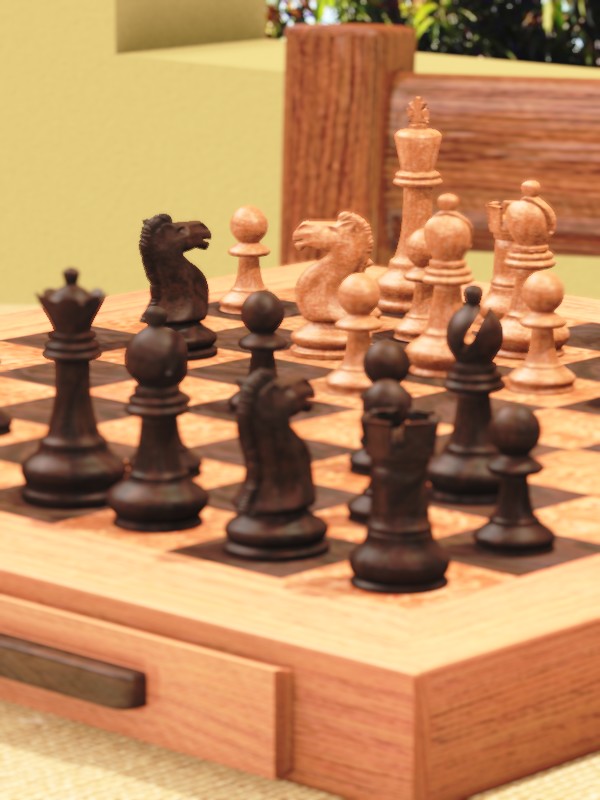 Time to stick a fork in it: it’s done. I fixed the last bit of wonky texture at the top of the chair post, and made sure all the pieces were sitting firmly on the board (some weren’t.)

Indigo uses textures, right? I may try that, or Kerkythea, before I post this in finished projects.

Looking good. I still feel the top portion of the composition is heavier than the bottom portion though.

Still trying to get Indigo to work. 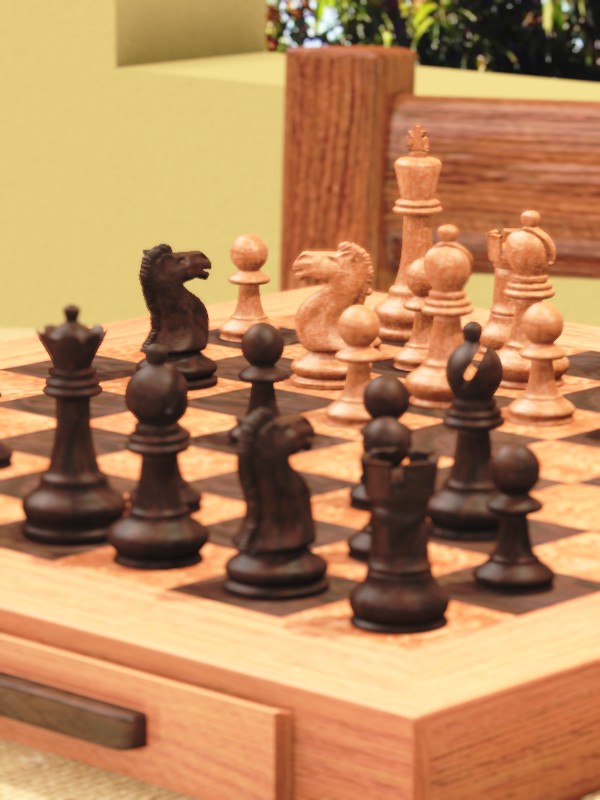 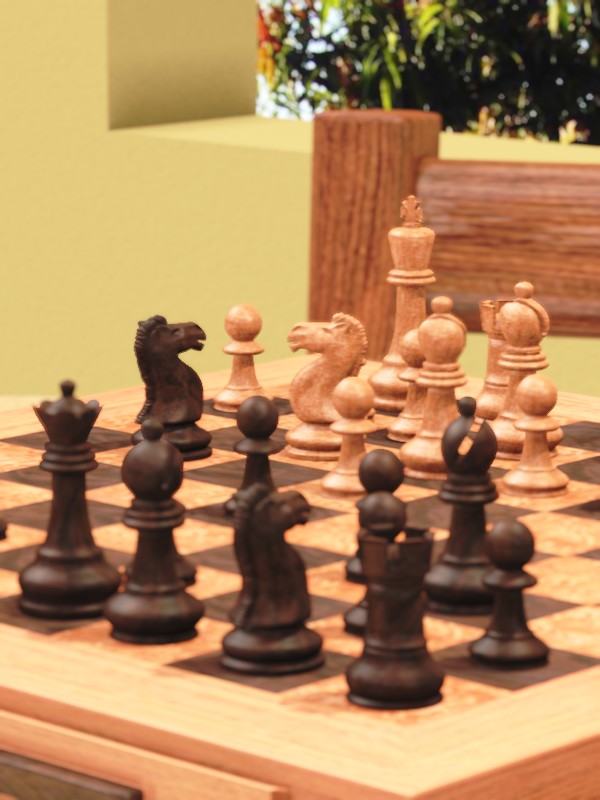 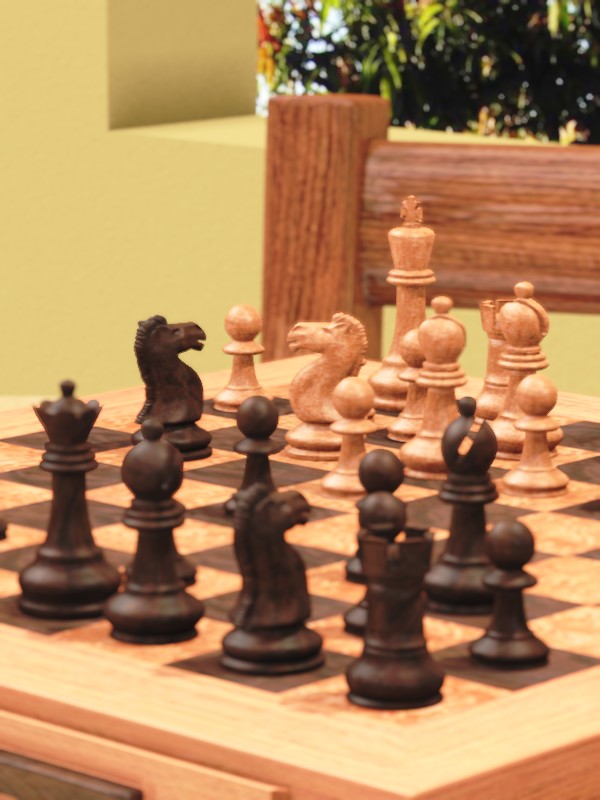 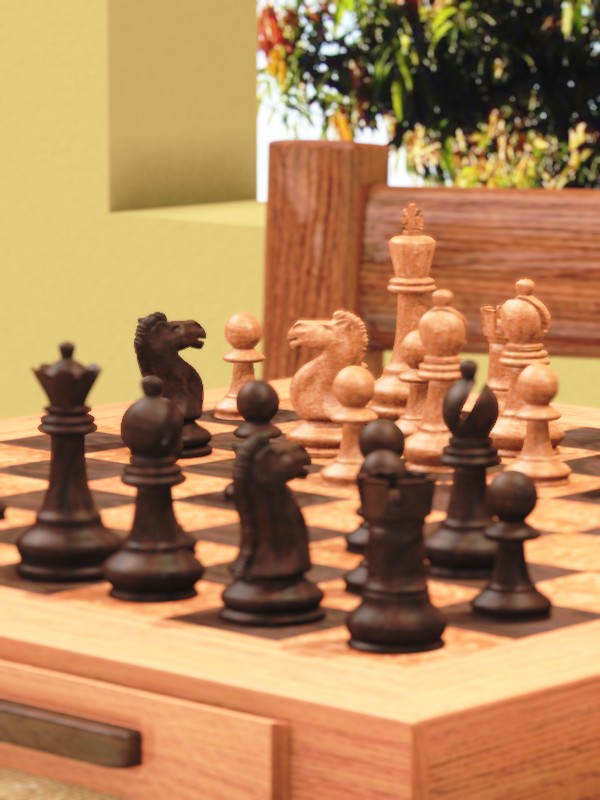 number 2 looks best to my eyes. Take care of some unfortunate tangents in image #4. 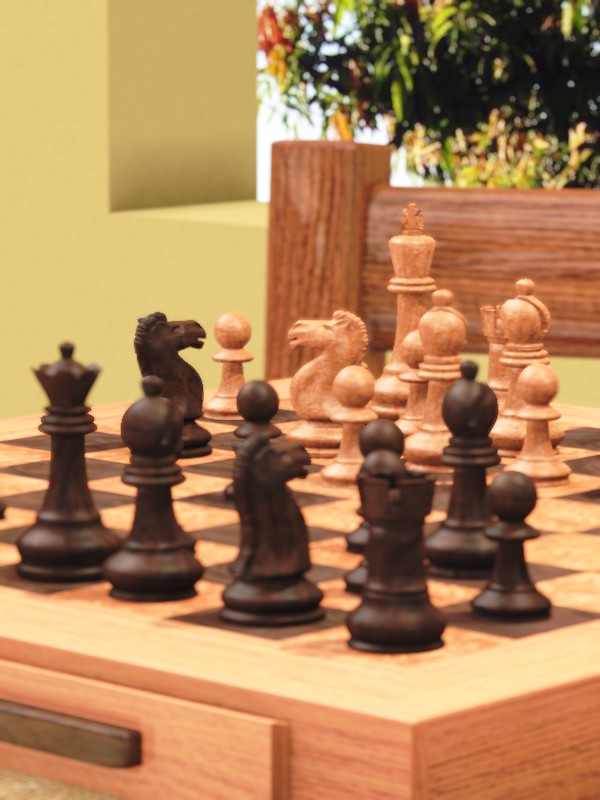 You mean the black Bishop and the white Pawn?

Yup. That is what I meant. I like your last one BTW. Well balanced. Call it done.

Myself I’d loose the wall. It’s not as textured as everything else, and covers up a nice tree image. The tree image may need it’s contrast turning down, or blurring (or both) to stop it from over-powering the foreground, though.

I’m very much a fan of your work, orinoco, particularly with your attention to detail. The following statements are made purely about my impressions rather than anything technical

This is a nice picture, but it doesn’t convey much, The DOF seems over the top, as any halfway decent camera would have the whole thing in focus. Over a span of 30cm or so, you’d be pretty much sure of having everything pretty much in focus.

If you’re going to include DOF which wouldn’t exist in nature unless meant, then try and make it focus on something very specific. For instance, focus it on the threat of checkmate. I do get a sense of the two knights being against each other, but since they can’t actually affect each other (well, directly), I don’t really gleam much from the confrontation. It might be that in one move the black knight can check the king, and the white bishop could take the knight, but it’s not a direct confrontation and so not striking in a picture. I might be looking too deeply into this though

Again, this is nice picture, and technically I can’t really fault you. However, it doesn’t seem like a interesting photograph, but this is because I’m damn picky

edit - Apologies for waffling, a final exam and some damn fine whisky will do that to a man

Why is this being bumped?

Don’t know, musk. After ypoissant called it done, I made another thread in Finished Projects.

@IanC, thanks for the additional crits. It is a confrontation between the knights, but not strictly a “chess” confrontation. Other chess buffs have also called me on the “impossible” postitions of the pieces, since black, I think, has moved too many times.

@yogyog, with no wall to provide a buffer and some non-busy texture, the image looks chaotic. If I blur the background enough to not be overpowering, it looses the realism.

ypoissant, I think you’re right about the composition.
[ATTACH]36395[/ATTACH]
More background. Might need to find some image that matches the light direction, or change the light.

I think that this one looks best, of all the images shown. The shadow on the board is tight, and the background is attractive but not distracting.

I’d really like to see how you’re making this Chess game, by the way. I’m really interested in making a Shogi game.:evilgrin:

Remove the wall, fix the background image. And make the board smaller, not so thick.
More like this one…then it would look perfect in my eyes…