Okay, so I’m making this chess program. Use the arrow keys to move the cursor around. Press Enter to pick a piece and then Enter to choose its destination. To deselect a piece, make an illegal move or press Enter on the piece again. Also, you can use the WASD keys to move the camera around.

Would love undo. Maybe then I could win.

Would like to be able to spin the board, it’s not really fair to black.

Changing selected piece: You can deselect a piece by trying to make it move to an illegal space, but I forgot to mention it or assign a key to do so.
Undo: Ehh…a feature with low priority.
Side swap: Won’t be implemented until I’ve got a decent camera system.

I like it. I especially liked the glowing move possibility indicators. They look slick. The game ran rather slow on my machine, though. Your Logic is very heavy. You don’t seem to be returning any errors, so optimization is the only thing that will speed it up. I really didn’t look at it that much, so I can’t offer much in the way of suggestions.

For a camera system, I recommend that you implement a full 360 rotation. If you do that, you’ll probably want to set up a system to auto-correct the directional keys to change with the rotation (so that up always goes away from the camera, down always goes toward the camera, etc.). The auto correcting keys are a little difficult to make (I just did that a few weeks ago for the Sokoban Project I’m working on), but it’s worth the effort because it gives really great gameplay.

I’m looking forward to computer opponents. I don’t much care for playing against myself. It’s too hard to win.

WOW! Sophisticated!
The weird thing to me is, you can code all this, but you couldn’t make a more
friendly interface, mouse grab maybe?
Anyway, it’s a great work! Bravo!
I used to play chess, when I was kid!
I’ll try to “test” the chess engine quality!

Yeah. I don’t really like mouse-based interfaces for two reasons:

nice game… I would make the camera angle less low to the ground or make the board/camera rotate around… because sometimes the pieces get in the way.

Amazing , …
Great Job
I always play Chess with my mom , but i have never beaten her in this game

Ha! I won a game, but the AI started wacking out on me. The little black hovering thing was all over the place! 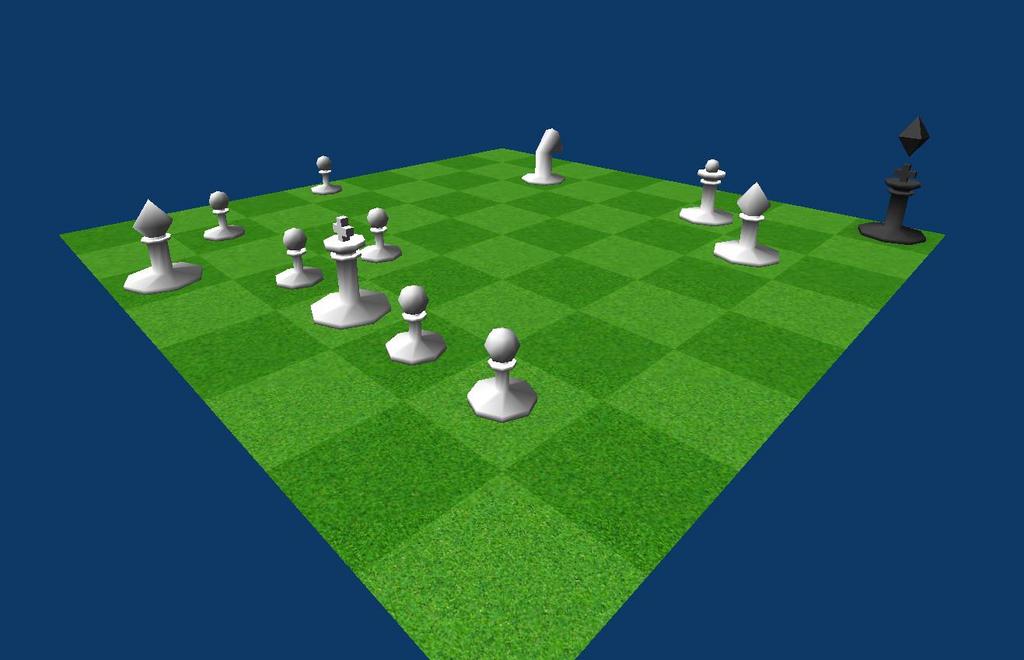 I think graphic will be nicer later (smoother bottom of figures, background…)

A logic is nice, of course now is very stiupid but you are still working on it.

Ha! I won a game, but the AI started wacking out on me. The little black hovering thing was all over the place!

Yeah, that happens. I’ve looked around the logic and found some reasons why, so I fixed 'em.

You should include the version in the file. That way in case you mess something up and then save you don’t have to start over.
For example: “better_chess_1_0.blend”

Of course, if you wanted to give yourself an even greater challenge, you’d create Go.

Very nice job! although the AI is pretty dumb.

How long did this take you?

Heh, the chess engine must not be very good, 'cuz I won.

Nice work! Coding a chess game is really more complicated than most would think. The models could use a bit of work though, but I’m guessing your primary focus now is on the programming.

Awesome game! I won, yes, I beat the stupid computer!