I’m new to the forums, joined yesterday, and was aiming to get some critique, tips and recommendations for my work.

I consider Blender an amazing tool thought I still have a long way to go in knowing how to use it efficiently.

Currently I’m working on a character mesh for a game project. It’s in super deformed (chiby) style. My main inspiration was the style of the Bravely Default characters. I really like that style plus I believe it works well with low-poly meshes. 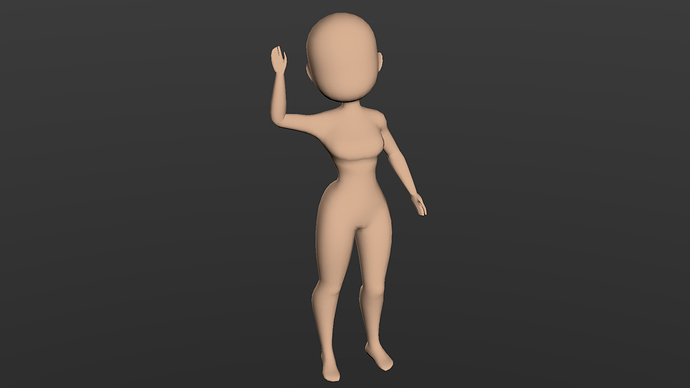 Here are some other pics and a render with Cycles. I’ve been planning to start rigging but I first want to make sure the mesh is at a good point. I don’t imagine changing the topology after setting bone weights to be a good thing, right ? 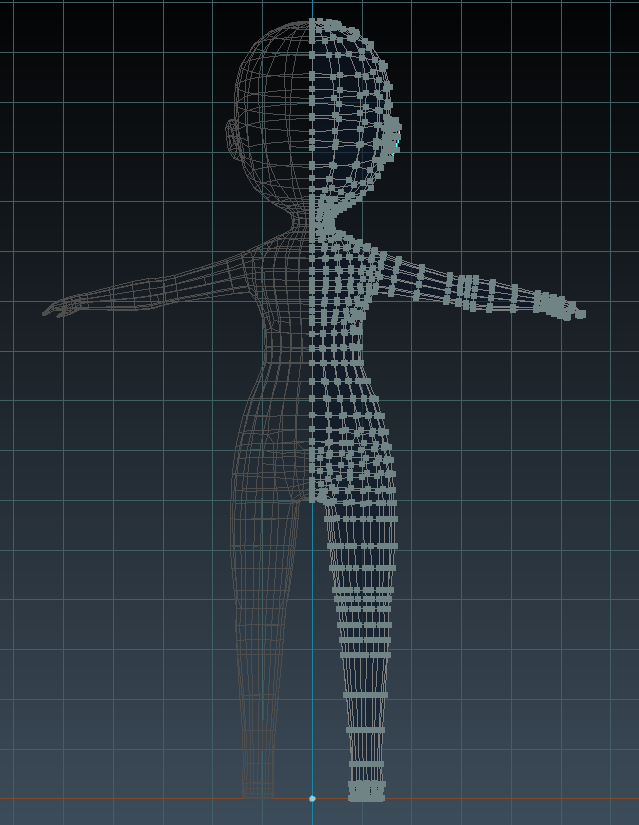 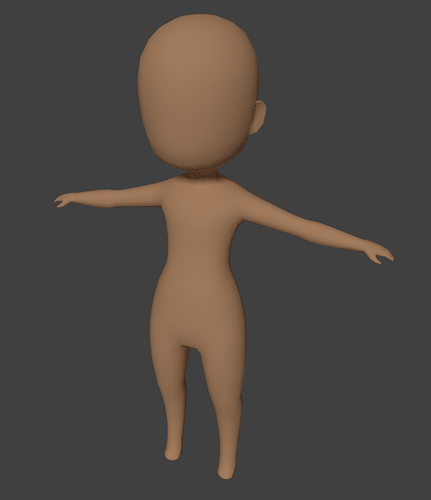 Looking good so far.
I’m also new here and are planning to also start a character so I will be following your progress.
The overall shape is very clean, your topology is just strange, why did you not go for the normal face topology?

Looking good so far.
I’m also new here and are planning to also start a character so I will be following your progress.
The overall shape is very clean, your topology is just strange, why did you not go for the normal face topology?

Hey! Thank your for your kind words!

I’m not sure what is the “normal face topology”… Like I said, I’m new to this and while I can use Blender to some extent, modeling organic characters just isn’t my forte, yet. Could you point me to an example of proper face topology that would fit the character’s art style ?

I too have my doubts for some of the other areas and that is one of the reasons I’m posting to the forums.

I would love to see your character as well

The topology looks good to me. Is the face going to be made with a texture? Also, what kind of game is this going to be? Reminds me of something that would be in one of those Final Fantasy for DS games

The topology looks good to me. Is the face going to be made with a texture? Also, what kind of game is this going to be? Reminds me of something that would be in one of those Final Fantasy for DS games

Yes, I’m going to use textures for the face.

The game will be an RPG. As for the style… that’s what I was going for. As I said above, my inspiration was the Bravely Default games. Generally, anything by Akihiko Yoshida (see Final Fantasy XII, Bravely Default, Four Heroes of Light, FFIII remake etc)

I’ve just finished making an Armature for the character. I’m currently looking into Constraints and Inverse Kinematics.
I’ve tried bipedal animation before in Blender but without any handles or IK… The process was quite slow and the results not quite satisfying… I will have to get better at this. Any good (non video) tutorials out there ? I’m currently using my MBs and videos would kill them

Here’s a screenshot of the Armature 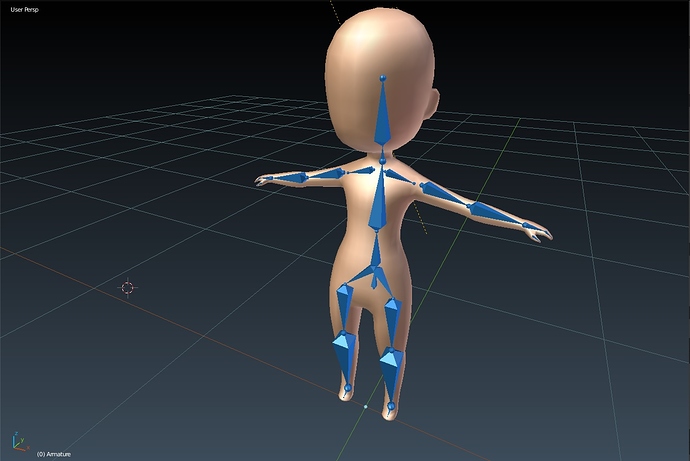 I’ll export an FBX soon, just to see how mecanim handles it.

An update…
I’m currently using my model as a base for a Hoplite. 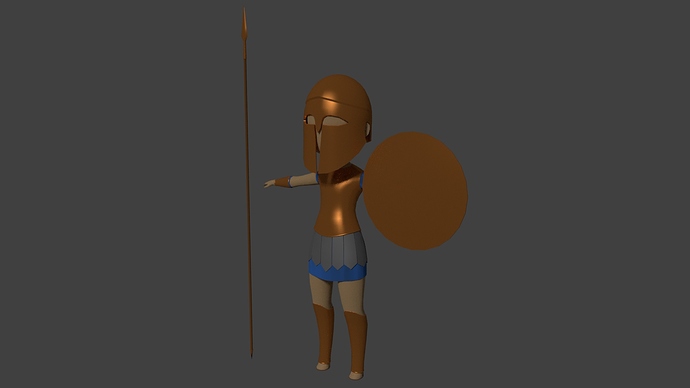 Hoplite Render.jpg1920×1080 55.5 KB
No textures yet. I’m planning on making various versions of the hoplite.

Another Update. Added a crest to the helmet and changed the shield.

Also, when I use a Subdivision surface version of the model to sculpt for normals, the dyntopo brush creates detail but makes the model surfaces appear sharp like… Any ideas for making normal maps ? 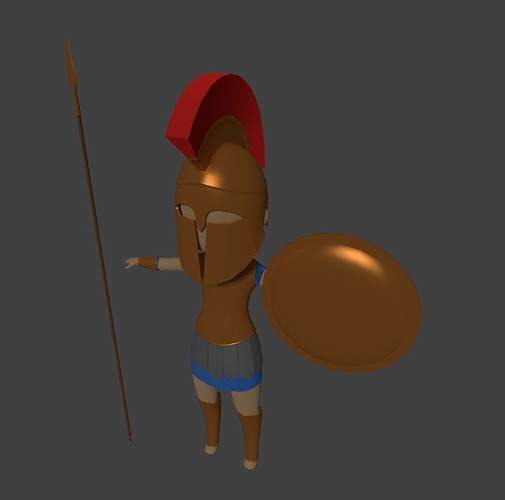 A Render.
Some changes. Mainly to the helmet and the tunic/belt. 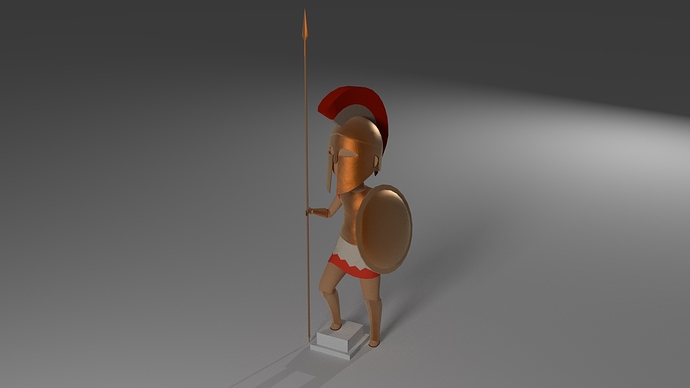 Render.jpg1920×1080 121 KB
I was trying to make a material for the tunic using a 2 Noise textures but without much success. The tunic and belt are currently with only a diffuse node.

I want to sculpt some normals (since this is for a game) and since the mulitres modifier isn’t helping my case much, I was thinking of using a custom painted texture to give output to Displacement. What do you guys think? Would it work ?

Long time since the last post… been a little busy with other stuff.

I’ve resumed working on the original model. Made a female variant that can be latter be used (with modifications) as a base for any female charactes that follow this particullar style. I believe I’m getting a little better with my topology but I still forget to abide to the “mesure seven times, cut once” rule 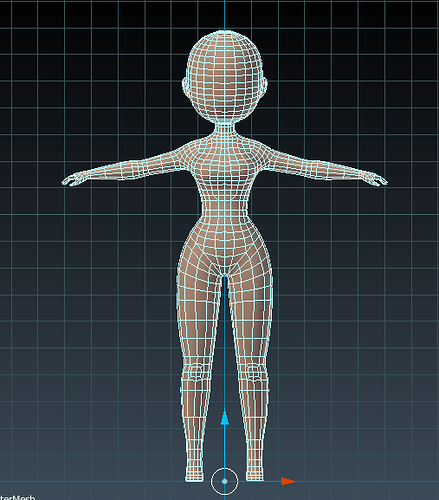 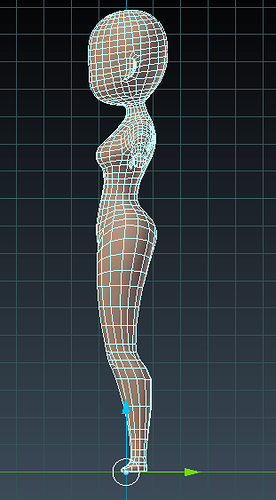 Your opinions on this would be most welcome. Thanks!

hey
did you build these models from scratch?
I’m looking for a base chibi model to build a super hero character for disaster management in my country.

hey
did you build these models from scratch?
I’m looking for a base chibi model to build a super hero character for disaster management in my country.

Yes, I did build these models from scratch. Been working on them for some time now, when I find the time…
I had some thoughts of making the base chibi character available on the Unity Asset Store some time ago. Still haven’t but PM me if you are interested.

Hi madkons… Yes you should take the time to upload it in the asset store.

Hi madkons… Yes you should take the time to upload it in the asset store.

I will eventually.
I am almost done. Some changes here and there in the mesh. Adjusted the Skeleton. The model deforms quite well as far as I can tell with automated weights so little to none weight painting will be needed.

Here is the current model.

As usually I expect your thoughts about it.

I’ve been trying to make some animations for my model, starting with a running animation. I’m a total beginner when it comes to animating pretty much anything, so I would like to hear some other peoples opinions about my work. It does get hard some times to judge something that you’ve been working on for some time.

Although I’m not totaly unstatisfied with my atempt, I do believe there are several things amiss. I am also seeing some popping in the leg movement. This model and animation is meant for a simple game project so its ok if its not AAA quality stuff, but I would like to deal with any eye popping errors.

Here is the blender file with the model and the animation.

On the animation issues mentioned above.
I’ve started tweaking the curves in the graph editor. This gives me much more control over how the bones behave and helped me fix some of the problematic movements already.

Made the running animation and a short clip of it, which can be found below:

I’m making a character using the base mesh. Here is the progress so far: 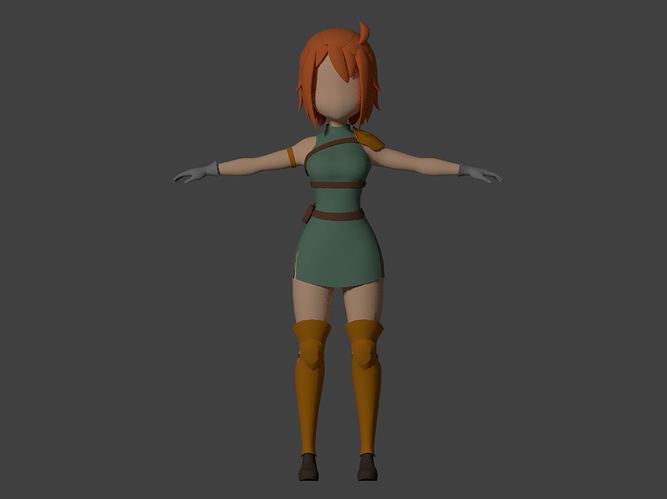 Its still not complete, but I’m close. There is also the texturing that needs to be done.

Final Base Mesh in Sketchfab.