Chibi Girl is blue because she lost her cat. 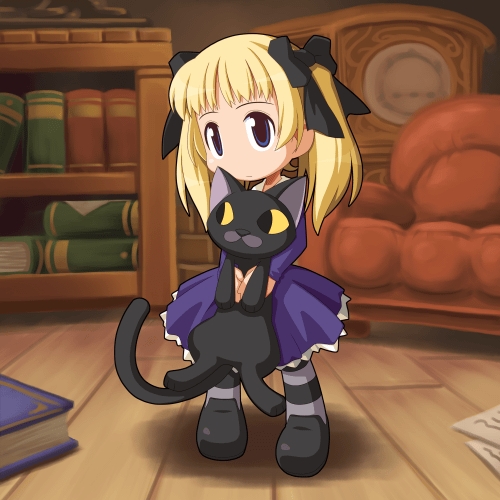 This was a fun project. Crits are welcome. I’m not going for the same face, but would like to know if there is anything that needs fixing to make this a “good” chibi figure. Thanks.
[EDIT] Wasn’t quite satisfied with the face, so I reworked it a bit and replaced the image. She’s not so “blue” anymore, so I suppose that just refers to the dress, now. Hmm, I think I’ll call her Monica…[/EDIT]

wires and modeling details below 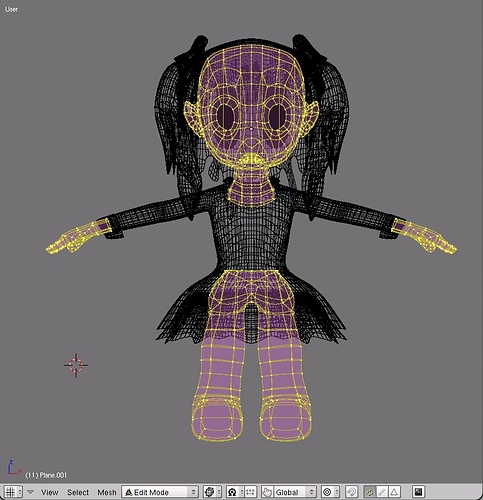 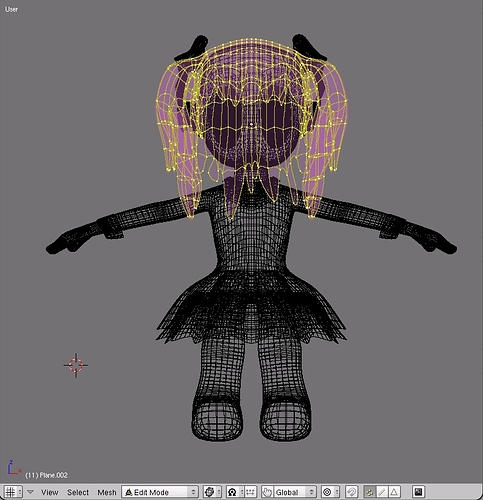 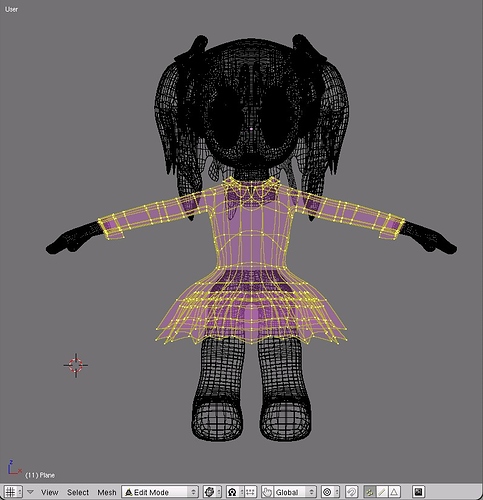 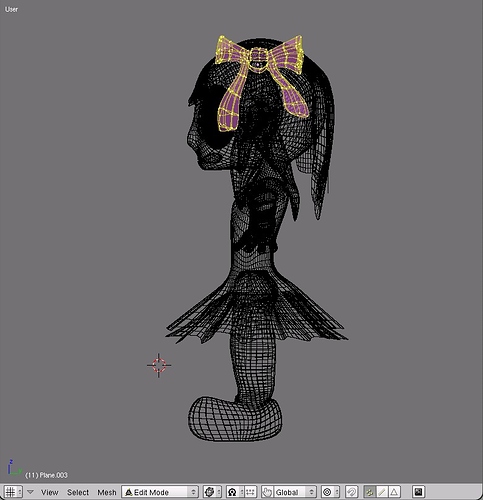 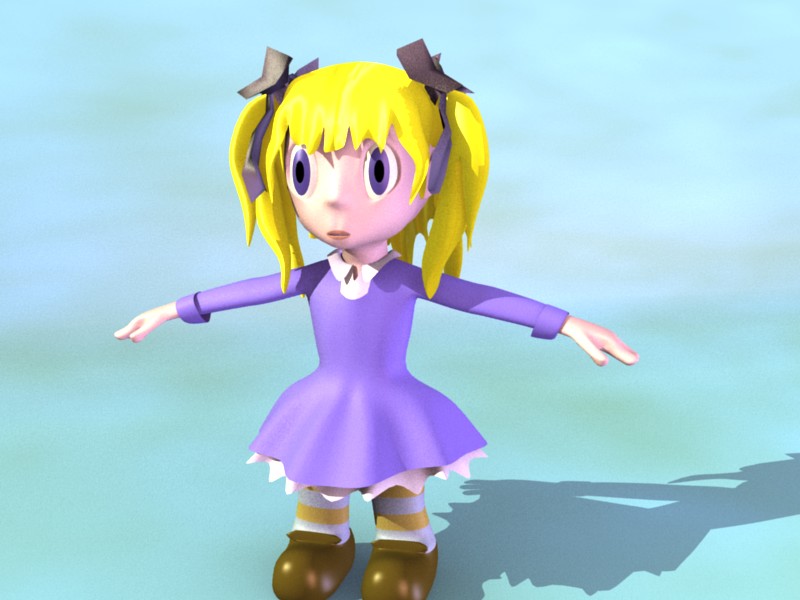 haha cute! Nice modelling, though I’m not sold on the face… If you want to make your wires less complex to look at, turn on optimal draw on the subsurf modifier.

turn on optimal draw on the subsurf modifier.

Ah HA! So that’s what that’s for. Thanks, man. Will update the wires real soon (actually, probably tomorrow, I’m off to take in some Shakespeare.)

I think Monica needs some eyelids so she can blink, and maybe a little more hardness on the eyes so they look wet and more natural, plus so you can get the same look as the reference with the spec.

I think a nose is a tiny bit too long- you need a “dot” rather then “line”. Apart from that- ubercute model, thumbs up.

UV unwrapped the dress and added some decorations, worked on the head, raised the waist a tiny bit, added a cornea to the eyeball to get the reflections, but I’ll need to add a separate eye light since her bangs are shading the eyeballs. Changed her hair color from that bright yellow to more of a blondish shade. Tried to make the nose more dot-like, and put in eyelids so she doesn’t look so scared anymore. Although she does appear wary, or apprehensive. something about the eyes, I think, but I’m not quite sure what it is.

Maybe it’s fact that bottom half of face is more “triangular” then in original one (which seems to be rounded and much more flat) ? Sorry- just guessing, I am not sure myself.

Couldn’t resist. The face was too old for the body.

Did some work on the chin/jawline, added an eye highlight lamp, made face flatter. Back to a younger look.

Seriously speaking- It’s definitely going in right direction, please forgive me what I have done but I “rounded” face of your model in Corel, shortened line of lips (on ref pic it’s almost impossible to see them), changed eyes from vertically streched to round and added eyebrows (there is no good anime eye without them.

Maybe this will help you - I am sure 3d version will look hell better then just quick edit in 2d(once again, sorry for editing your picture, I will delete it together with this post if you do not wish it- I tought it might be at least a bit helpful).

Paintovers are not a problem, RK, not a problem at all. I’ve done my share. They’re a much better way to communicate artistic suggestions than words. Thank you. Haven’t had time to work on it since Sunday, and the next big task is unwrapping the head and the hair to put some textures on them. Unwrapping is not my favorite part of modeling, but at least, when it’s done, it’s done.

Chibi Monica with eyelashes, a rounder jaw, shorter mouth and rounder eyes. The eyes aren’t completely round, but with the design I’m using, if they got much rounder, they’d start poking through the face. I may work on an alternate design. I think I like the previous jaw line better, with a wider mouth. The eyes are definitely an improvement, though.

Much closer to original, absolutely. The mouth and back of the head (flesh, not hair) is only piece that might require minor correction now. My method in case of doubt is to cover various parts of pic with small piece of paper- if after covering any element picture looks better I know I got to correct this part.
Are you going to animate her ? It would be so cool to see that…

RK, that is a good method for finding flaws. It’s amazing how many tricks artists have come up with for fooling our brains into telling us what we need to know to do our art.

I haven’t decided whether I’m going to try animating Monica or not. I still have a couple other projects on the back burner which I’m going to get back to once I’ve finished texturing her.

looking great Orinoco.Enable the SSS feature in Blender for the skin and hair…

Odin Sphere sure is a tastey game… Though if it’s taught me anything, it’s that we could all use a little more 2D in our lives. Orinoco, I don’t mean to say that your efforts aren’t favorable… You should keep it up, definitely! But this model suffers from a lack of reference that you can actually use - something you can trace. Yes, you have a picture to go by, but you will get much better results if you take some time out and re-draw the character in your standard pose from the Front & Side. You can make a lot of decisions about her proportions and features more rapidly than pushing points.

Playing around with hair. Put the new hair on high school monica, and for some reason thought she looked like she should be ice skating. So I turned her shoes into ice skates.

This project has taken two forks: Chibi Girl Blue, the little blonde girl in the blue dress, sans cat, and Chibi Monica, the late teen/twenty-something with the red hair and ice skates. Here is the latest incarnation of Monica, with UV texturing on the legs, ice skates and eye highlights.

@Wim: thanks for the advice. Looks good on the skin, but SSS on the hair made it too bright for some reason.