This is my first time posting something on Blender Artists, unless you count the replies to the tutorial for using this site.

I just wanted to say Merry Christmas everyone and may you be blessed by the true Christmas Spirit all year round. And I wanted to share my Christmas UFO Animation that I dedicated to my dad. 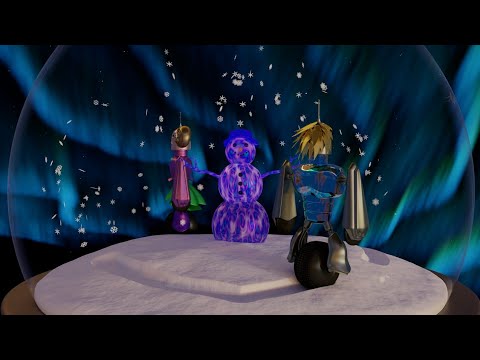 The video’s YouTube description has some links that were helpful to me, including the link to the ebook that taught me how to build a toy robot.

Don’t forget to watch all of the end credits. I added a special effect to them.

Have a great Christmas!

I wish I would have seen this when you posted it! Nice lil’ animation! Cool how the tire tracks in the snow turned out to be a heart. I’m looking forward to seeing more!

It took a while to figure out how to do the tire tracks. I had to keep tweaking the height of the curves that the robots were following and the mesh of the snow itself so the heart would look as clean as possible. Then I would had to wait for my laptop to bake the new dynamics of the snow mesh to see if it worked out. I’m glad you enjoyed the heart reveal.

I’m looking forward to seeing more of your work as well!

haha this is awesome! I love the heart effect on the snow (how did you actually do this?) and the credit to Dad at the end was really touching.

Also, did you use an emitting particle system with turbulence added for the effect on the credits?

Really cool theme overall, where can I sign up for the UFO?!

Thanks so much! I’m glad you enjoyed it. My dad loved Christmas and quite often, even during summer, children thought he was Santa. I went sci-fi with it because we used to enjoy watching sci-fi shows together.

I created the heart in the snow by setting the ground as a dynamic paint canvas in the physics tab and the wheel as a dynamic paint brush. And I set the armature of each robot to follow a path in the object constraint properties. The root bone of each robot was centered right underneath the wheel. Each robot had its own path that together consisted of two curves that shaped a heart.

Even though the curves were shaped like a heart, it took a lot of tweaking of the curves’ z position and adding more subdivision of the ground along the path to make the track look right.

I did add an emitting particle system for the end credits. However, instead of emitting from the whole text object, I duplicated only the front plane of the text and set it to be the emitter and made sure I unchecked “show emitter”.

Each line of text itself had a boolean modifier that was set to difference and the object for the modifier was a long box-like object that was invisible due to making sure all the ray visibility options were unchecked in its object properties. I had that object come in from behind to make the text look like it was dissolving into snow.

I broke the end credits into two parts, each with its own blend file since my laptop was having trouble not slowing down too much when having them joined.

I also animated the scale size of the particles settings so that snow flakes would start out small and then look like they melted away at the end.

The last thing I had to animate for the snow flakes effect was the damping property of the particle system. This helped make the snow flakes stay close to the text at first then disperse.

I hope the info on how I did it helps.

As the mastermind behind the United Federation of Ornaments, welcome to the Federation.

Nice work, I like how the wheels make an impression in the snow.

Thank you! Have a wonderful day.

Merry Christmas and Happy Holidays to all my fellow Blender Artists out there!