Two of my works.

Cromanorama is Blender+Indigo
There! Our Home! is Pure Blender. i’ve posted some node setup.

Some very nice work, nice and shiny, the compositing setup for the last one is also interesting.

Shiny, you’re right. ;). Thanks for the reply and for seeing! I have a lot of sketches done from years ago. Last year i started the production, so i’m working right now in others.

I’m having some problem seeing if they’re facing the viewer or the other way. I see it in the screenshot though. :^)

this characters has no face…
Thanks for viewing! C&C are welcome

sorry to ask, but i’m rather new to the blender scene. did you model the convoluted boxes manually or is there a script?

Chromanorama rules, the other one less so. If it was just Chromanorama, 5 stars.

Very nice, my favorite is the green cube one, even if it uses the discombobulator.
The characters in the second one look very familiar to some other company’s logo or something, I can’t think of it though :p;).

Thanks to all for the feedback!

and a little tweak with a great script: Big Numbers Toolkit, from

@free_ality: Thanks, thanks a lot…i want a really big print of Chromanorama for my living room… (but it’s too expensive…

@otto_riis: Well, you know, this one starts with a few experiments with discombobulator and indigo… here is the picture that i show to one friend of mine that says: “Hey, i like it, make me one to hang in my bedroom!”. So i’ve done what i’ve called Cromanorama.
And the characters are those images that come along with me for a long long time. Maybe influenced by the dummies that draw an ex-girlfriend, some architect-style renderings of persons… who knows. They are pretty simple 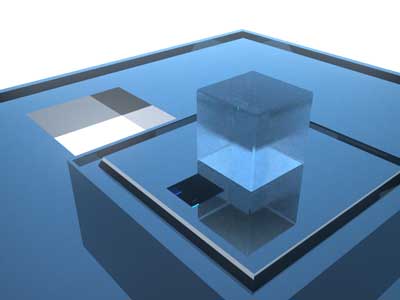 Very nice stuff there mate. Especially that last one (The one with the spikes and faceless man). Would you mind uploading the Blend file for it. I’d love to be able to do stuff like this and it could help to see how you did it. If not no probs but If you could that ould be really cool.

here it is, maul2. No problem. The only thing that i’ve added is the subtle texture in the back, that was made by hand.

I’ve added the blend file in the first post! Enjoy.

Don’t like the first 2 images much. Too automatic.
But, i love the third image!!!

well, maybe look that way, but i swear to you that they aren’t…

Now when i see the original image i see something that i like, that seems to be lost when i’ve worked in Chromanorama… Why this things happen?

Thanks for your comments!

When I click on the link it gives me a “Page not found”
Are you sure you have the link right?

yes, there it is… To me works correctly. If it happens again, PM me and i’ll send you the blend.

Brilliant works! They remind some cools motion graphics studio stuff (like Shilo, or Belief). I hope one day you will animate them (expecially the first one)!

Nice work, but, please, less image compression next time. It kills the purity of colors and affects the clean appearance of it.

Thanks for your comments, guys!
@DhAoS: woow! they’re big guys of CG, dude! there is a long way to go i think, but i’m trying to get there all the time, thanks for the compiment! By the way, i’ll animate some of them for this project!