Clarification on a few topics

Hey, I have a few questions that I can’t find a clear enough answer that i hope you guys can provide in a thick-skull suited form:

1 -> the ambeint setting next to the sky/mist color will brighten it up if you make it lighter.

nope , is just with GLSL that seem mandatory one light

1 - You can use “shadeless” under the Material > Shading.

3 - I have not used scenes to much, but what about only use main and background scene, and then use Moguri’s BGUI - https://code.google.com/p/bgui/

4 - Sounds like you should modify the focal length of the camera? 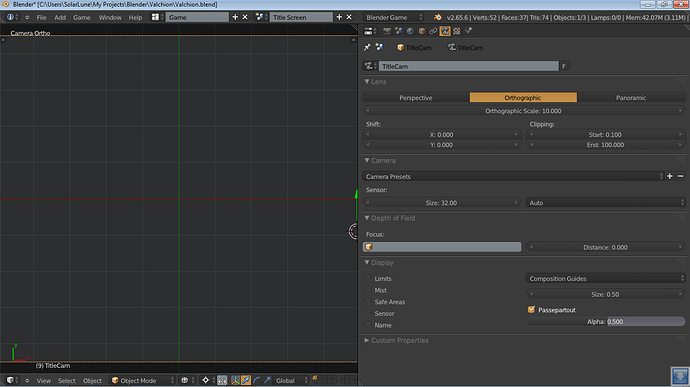 In the pic above, the camera view is slightly smaller than the 3D view. I have passepartout enabled on the camera (in the camera settings), so the thin dark areas at the top and bottom of the 3D view is where the camera won’t render. I push the panel on the right over so that the 3D view just gets the camera and nothing else (none of the dark, passepartout area). When you’re zoomed in 100% and see nothing but what the camera will render, that’s the view that the game will have when exported (but, of course, with the resolution that you specified).

As a side-note, each scene has its own framing, so be sure to make them all the same. You could make duplicate scenes with the different framing options and switch to them as you need to, but that would be pretty ugly.