-General About-
I came over from maya and learned blender to do my senior graduation animation.

It’s 100% open source on ubuntu, all the bands are diy, and all the sound effects and musical score were recorded by my friend Don and I.

thanks so much to all the blenderheads here who helped me get a hang of the basics of blender so fast.

Biggest blender thank you goes to T.K. and the freestyle development team. They’ve been so helpful and responsive. Amazing people.

This film uses blender edge rendering for the regular scenes because i liked the soft shading and ease into the line. I also had fun using focal length and threshold to get grid effects that i liked.

Freestyle was used for most all the colored lines, the color sequence after the kiss, and then it’s obviously heavily used in the last dream sequence. 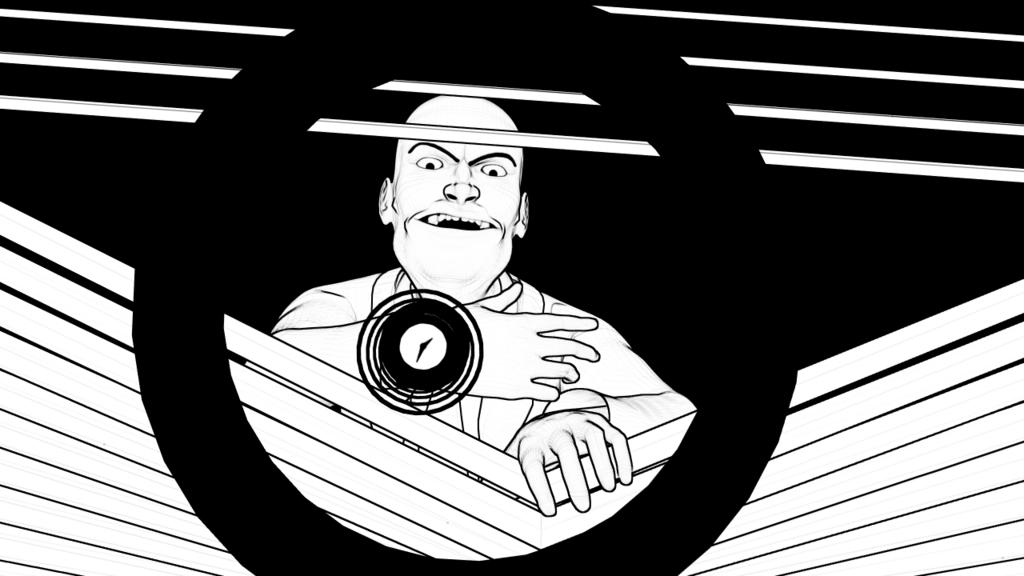 I think it looks great.

So there is no video in that?

Great animation! it seems that freestyle it´s getting serious

Nice work, you should post this in finished projects as well!

Nice work, you should post this in finished projects as well!

@jay - thanks man, can this thread be moved over there? i first thought of putting it there but it seemed it was all still work. i hate wasting threads.

@atom - nope no video, but out of curiosity what do you mean by that? where would the video be?

originally i had video behind the windows, but it ended up detracting from the storytelling and aesthetic. as far as the movement i used no video reference, but the characters are modeled from my girlfriend and I so there was a lot of goofing around in the mirror. plus our animation program is very big on movement and story telling and light on technology or medium

I found it a bit too slow paced, but it’s pretty cool anyways, a few diagonal glitches (Freestyle issues, I know) but hardly noticeables. Great job.

I found it a bit too slow paced, but it’s pretty cool anyways, a few diagonal glitches (Freestyle issues, I know) but hardly noticeables. Great job.

this film is about boredom and paranoia, and i abbreviated as much reaction and lead up as possible before it cuts out story. i experimented with cutting more, but i felt it’s supposed to be slow paced with small bits of excitement that lead up to a fast paced climax. most of my animations are furiously fast paced as they’re usually just punk music videos, but i want the pace to tell the story in this short, just like the camera, facial expressions, body movement, etc. a fast pace doesn’t communicate a slow paced feeling to me.

btw if you haven’t watched it full screen yet try and see if you still find it too slow. i have a hard time keeping interest on anything that isn’t shallowly exciting when i watch stuff on the internet.

but yes thanks a lot for the comment, i hope some of the freestyle stuff gets ironed out. i know you’ve been affected by some of the unexpected lines too. For me, freestyle got to the point that i could make this without those being visual detractors. During most of the production i was pretty sur ei would have to make the last dream hand drawn, but after some stability improvement and especially the viewmap optimizations i decided to use freestyle. I think somebody doing a cleaner movie would find those as a deal breaker. This has a raw a dirty style so like you said it’s there but it’s not a big deal.

Congratulations for the excellent art work. I got really impressed with the huge amount of efforts behind the scene. Thank you again for using Freestyle on the project. This is truely a milestone product made using the software.

Great work Ike. Glad that you made it to the end of your epic! I found the pacing exactly right - just slow enough to make you feel for him at the start, which set up the fast (and funny) end sequence.

The nice thing about Edge and Freestyle rendering is that it allows the animation, and therefore the story, to speak for itself. The other distractions of textures and lighting are removed. Really nice job from that point of view: the animation of facial expressions and movement seemed spot on to me, and the use of Edge/Freestyle was just right for the story, underlining the slightly dull formality of office life and the wildness of the dream.

T.K. - thats is awesome coming from you. I look up to you as an awesome human being.

edna - i’m glad you liked it, that was really nice. yeah freestyle is really awesome, i hope in the next year we can pull together to make some great documentation. There was another short using feestyle that was pretty good. it was on blender nation. I’m jazzed to see what people are going to use it for. especially since the distort tab has yet to come… once that is up and going… people are going to go nuts

Really nice ikeahloe!! I like the story, I think it was good pace. I think your sparing use of color (girl, sleep, TV) really set the mood well. Cool to see such extensive use of Freestyle too, Impressive work man!

was i correct in putting this in animations vs finished projects? if not can this be moved?

(thanks for the comments btw)

Hey. I remember seeing the wip of this. Good to see you finished.

Bravooo! I am really happy you made it

@graphix, yes i remember thanks for commenting on the original thread! I don’t think many other people were/are too interested in it haha.

@robi, thanks! i almost didn’t make it! by that i mean almost didn’t make the deadline, and almost didn’t make it health-wise. I finally got it together.There are of course a lot of things not so polished, but now that i’ve turned it in, i kinda just want to leave it, i have the editing how i want, but the credits are dull and there are spots i didn’t have time to go back and polish the movement

also i’m uploading it to my personal vimeo right now

Thanks for moving this over to the finished area. I’ve uploaded the video to vimeo now.

just an update, i’m enterign this in a bunch of festivals as i get money to pay for the feees, i started with a couple yesterday, and today, one of the festivals,Young Cuts Festival already passed it for the 1st round of judging.

“We have good news and bad news. The good news is that your films has passed the first round of judging. This means that we already consider it to be one of the best 200 films that we will receive (out of more than 1000) this year. The bad news is that this means that for the next round of judging when we pick the 100 films that we will screen at the Festival, we will need physical copies of your film”

Congrats on passing the first round of judging for the festival.

Ike, great work! I’ve been catching some of the clips from the freestyle thread. Feels good to be done with it, I bet!

Thots on the film: I agree with the comments on the character’s motion - seems a bit slo-mo at times… hard stuff to get right, tho and you did way better than I would have managed! The piece has the overall feel of a combo of Office Space and Joe vs. the Volcano (office scene at the beginning…) Funny how the main character and the girl shared so much (angst) in common, yet seemed to miss each other, 'til the carnage at the end, anyhow. Good story, I guess… expresses how many cube farmers feel much of the time. Needs to pick up the pace at times, but worthy effort, in all! Cheers!