Sup,
This is a piece I’ve been working on for a little while. It started as just a coffee cup and evolved

. Things I’m going to still work on: The rest of the cutlery, possibly chips and tomatoe sauce on the plate if I’m feeling excited, rays of light through the window. I got the light to work in a test case using a spot with buffer shadows but am struggling to get it to work for this case… C+C very welcome, oh and the spoon has got some wierdness going on. Made and rendered with blender64bit. 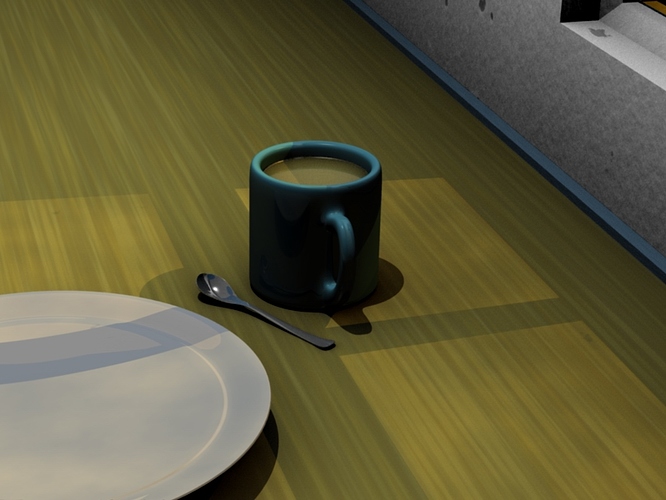 What weirdness has the spoon got going on, I can’t see any.

Oh, by the way, try turning on Ambient Occlusion.

Also, 64 bit? How long did that take you to render.

me says, yes you do need some global illumination, an hdri, and better texture (maybe photo) for the desk… then we shall see how it looks

like the idea and the mood the render transports. Image look a little flat, though.
Some more contrast, e.g. some more light and shadow, would help imo.
Ambient Occulsion would also be nice. personally, i love that grainy look…

nice idea - i like how you have positioned theshadow - some GI/AO would be good too - and mayby an improvement in the overall composition - im not really fond of putting the focal point in the center of the shot unless the subject is symetrical… good luck!

Just a comment about the lighting. The title says “closing time” but the light looks warm, like sunlight. Also, the table setting doesn’t look used. Oops, that was two ; )
About the spoon, you should be able to make some adjustments to this fork tutorial without too much trouble and come up with a pretty passable spoon. (Three)
http://www.blender.org/modules/documentation/htmlI/x9810.html

I just realized why it looks like a daylight scene to me. The light in the room looks like reflected sunlight. If it was more greenish, it would look like light from a fluorescent fixture. (Four, I’ll shut up now.)

I like the scene. Keep up the good work.

Sup,
Thanks for all the feedback it is much appreciated

BloackBoe: Sweet will try it with AO on. I thought the reflection kinda lost the shape of the spoon around the neck… maybe you’re right though, it’s not sooo bad . 64bit rocks dude, it literally halfed my render time. I can’t remember the exact time for that render but I did a test last night with a updated render and here are the figures.
Scene rendered in both cases with no AO, OS set to 5. Using 32bit windows and 32 blender 3min 8 seconds, using 64bit windows and 64 blender 1min and 43 seconds… oh happy days for 64bit… I’ve attached the test renders renders, it basically takes me half the time to render anything

Wayne: Good to hear from you . Ja I’ve got a way to come, I’m actually rendering with blenders internal so, as far as I know no gi. Yafray has driven me nuts, when I try render with 64bit it can’t find the yafray registry key even though 64bit yafray is correctly installed . Anyway I agree a photo for the desk would be better… I haven’t quite figured out HDRI yet, you’ll have to give me a lesson one day :D.

deFStonE: Shot, I’m glad you liked the mood, that is what I’m going for so thanks . I see what you mean by flat, I’m adding more cutlery and maybe some more stuff further back on the table which should also help

bjzaba: Ja I agree about the symetry, I’ve moved the image a bit to the left so the mug is offcentre :).

j1adobe: Shot for the crit. I sorta was going for the sunlight at sunset coming’ through the window so I’m glad you think it looks like sunrays

. I agree with you about the table setting, gonna maybe replace the procedural texture on the table with a photo. Shot for the link I will check it out

Right… Last nights mental render. Done with AO on 16, OS on 8 and the area lights inside the building have ray shadow sampling on, I also increased the number of area lights inside to 3 in a row… The knife doesn’t fit the scene so I might remove it and the cake is way too dark. For some unknown reason the jam in the cake renders green hmm… not sure why yet… ps check out the rays

Once again thanks for all the C+C, keep em comin’
A.Vector 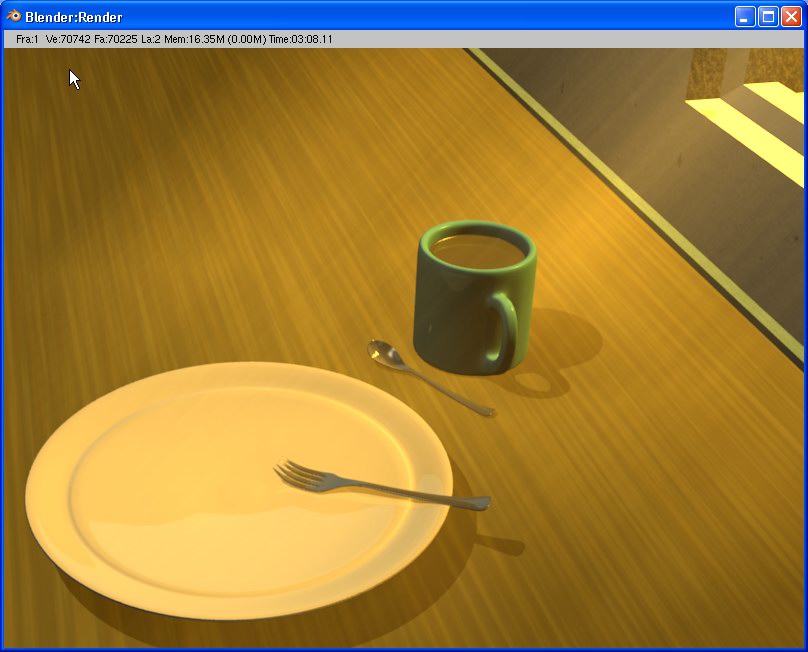 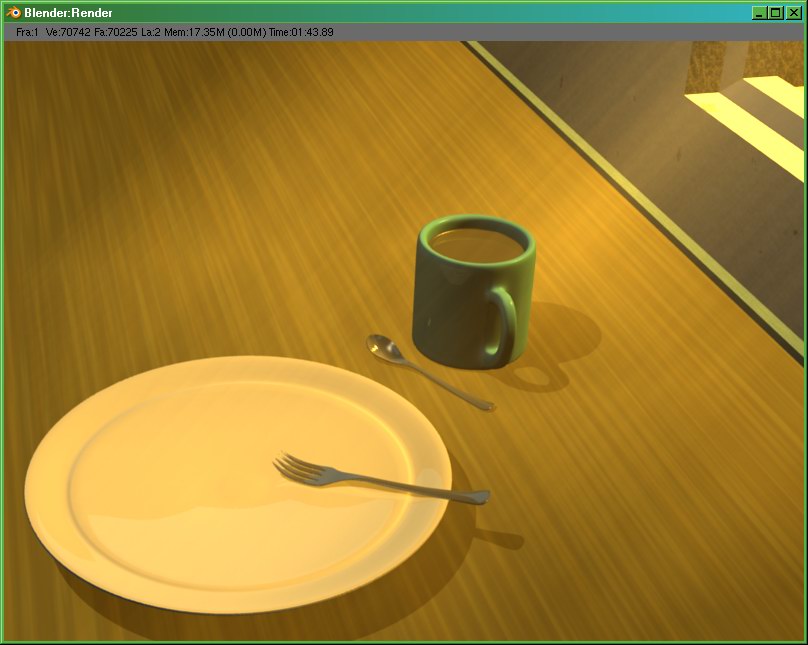 I’ve got a couply questions about shadow and the like. Any help would be much appreciated

In attempting to created the sunlight rays coming through the window I have encountered several problems.

I think the image looks o.k. but if I could solve the above two issues it’ll look much better… Escpecially the internal lighting would look better, I increased the spot angle so that you couldn’t see it’s edge as in the image above but technically the spot shouldn’t be lighting the whole of the interior… Hope all of this makes sense

Look to plastic
All surfaces have detail

Maybe one of your materials doesn’t accept buffer shadows. Also, you checked that the option was on in the blender render settings, right?

Once again thanks for the crits… Ja ja, plastic doesn’t taste so bad ;), gotta work on it . Need to add background image and fix cake, also as said work some more on the materials.

Zanz: Will be working on materials to get it to look less plastic… Shot, I do like the silverware myself

BlackBoe: I presume you mean the Shadow button in the render settings? If so it’s on and Shadow and TraShadow is on on all my materials… hmm… I 'll try mess with it a bit more… For the mo I added another spot with ray shadow in the same place as the buffer one and you get the window frame shadow back… 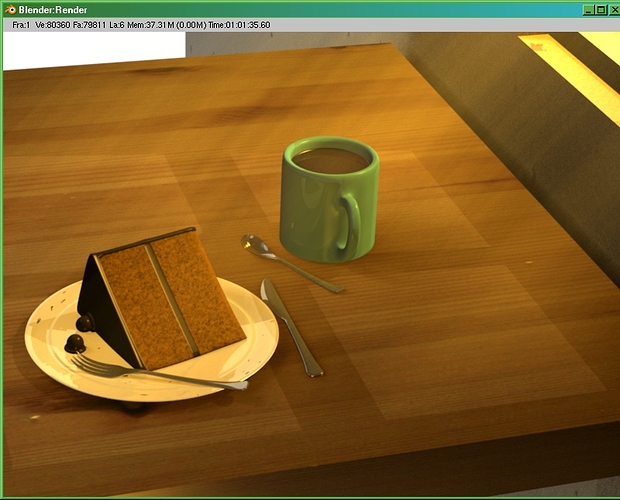 I actually meant your materials, maybe one of your object materials settings on how it reacts to shadow and–Wait. Is there still glass in the window? Cause shadow buffers don’t accept anything as transparent, they’ll treat transparent objects as opaque and cast shadow with them anyway.

BlackBoe: I think I found the button you mean under ‘Links and Pipelines’ tab, ShadowBuf, it’s on unfortunately… I’m pretty sure it is something i changed as some tests i did from skratch yielded the shadow correctly… Hmmm I don’t think the window is in place… will double check it. I will probably only post again on monday and hopefully will get to the bottom of it over the weekend. Thanks for the help.

an improvement would be to add some bump (normal map) on the textures.

Didn’t manage to fix lightning problem with buffer shadow. still workin’ on it though… Also this render came out a bit dark, the internal light weren’t quite right, the mood is allright i think… will update with brighter internal lights… also changed mug to the same material as plate, I think it improves overall feel of image… I also redid the cake from skratch… It’s a very simple mesh wiht a high sub-d and a displacement map… don’t know if that is the best way to make cake…
Got AO on 16, do you have to use yafray to enable HDRI rendering? 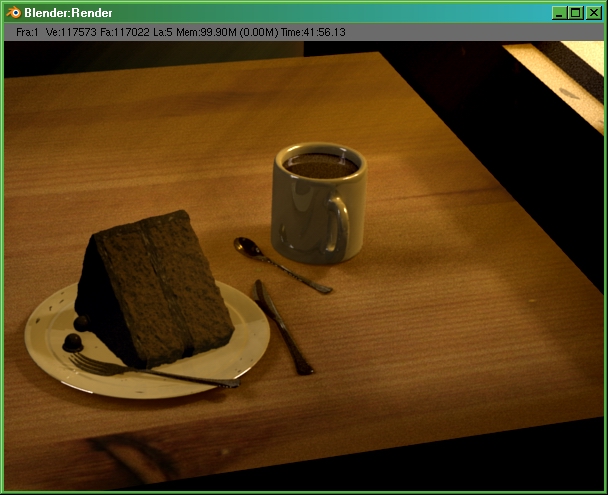 Yeah, you have to use yafray for HDRI.

At last it don’t look like plastic cake, I used like a million reference pics which made me very hungry :). Looks like I’m gonna have to switch to yafray. I think the GI will help, AO as far as I understand fakes GI, but the edge of the table in the front of the render doesn’t get lit by it… which is annoying and it’s difficult to light as there is now a bench right in front of it… Will just have to find a way to get blender to recognise the 64bit yafray registry entry… any ideas? Can I just export the xml and invoke yafray manually?

i agree wit hblack boe, i think the shadow problem has to do with the window pane. Buffer shadows won’t work if you have a window pane in the window frame. You could try moving the window pane to different layer that the rest of the scene and enable layer based lighting in the settings of the spotlight that you use to light the coffe mug an the cake.

BTW, at closing time i would expect all cake to be eaten ;-)) 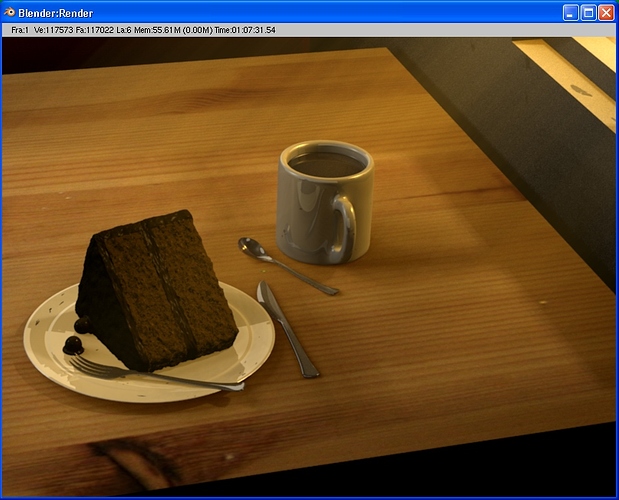