I’m trying to use the physics engine to make some clothes move in a natural way. At the moment I just want them hanging on a hanger. When I’ve baked all dynamics of the cloth for 40 frames, then run the animation, the skirt hangs nicely, but the top, especially the sleeves, have a tendency to wrinkle up. So I’ve made a couple of vertex groups; one weighted to pin the material, the other to Stiffen it.

After tweaking the settings and re-baking the clothes many times, I’ve got the best result I can at present; but it’s still not good enough. The pinning is preventing the clothes from actually falling onto the hanger, and the sleeves are still wrinkling in an undesirable way.

Does anyone know how to improve this result, please?

I can’t get the blend file to upload - maybe it’s too big? It’s 59MB. Even the rendered animation won’t load! Comes up

error. Here’s a render of frame 40 (the last frame in the animation). 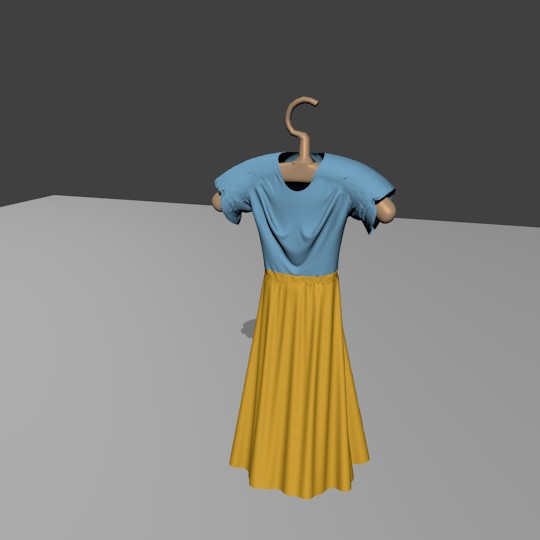 Make it smaller. You’re focusing on the blue part so the yellow part can be removed. Also apart from being a big hanger, a collision mesh doesn’t need a very high resolution. Always enable compress for the file when uploading.

Thanks JA12; I’ve done as you suggest:

I’ve removed the skirt and halved the number of vertices in the hanger; and shrunk that a bit too. I also set the length of animation to just 10 frames instead of 40. File size shrunk to 954 Kb … until I baked it again which increased the file size back up to 42Mb! So I freed all bakes - which brought it back to 954Kb. Then I compressed the file to a .rar which shrunk it to just 176Kb. But when I try to upload it I again get an error message

… so my only other option seems to be to save it as a WinRar Zip archive (which is 213Kb) … I’ll see if that’ll upload… Wardrobe_15_TopOnly_ToBake.zip (213 KB)
Oh, it seems to have uploaded. I wonder if you can access that? 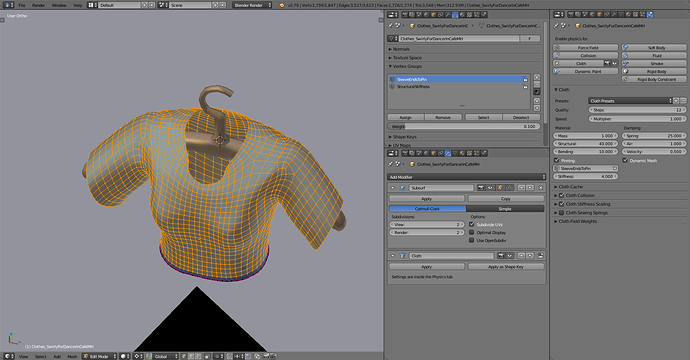 What kind of dress is this and what material is it made of. I’m no expert in cloth physics and definitely not in women’s clothing, but I’d guess that they don’t use a single piece of fabric and hot press it to form, which would give it the starting form like you have. If it has a form, I’d think it would have structural stiffness and molded http://tinyurl.com/y7a75q5b because it has very little support otherwise. Softer materials would fall and hang, which is why they use dress forms and mannequins to showcase them.

So if it’s soft material and you want to hang it from a hanger, the starting form might not be right. Seams would alter the stiffness of the material, and make it less bendy. If it’s structured and stiff material, might not need to simulate it at all, or just partially. Just a thought.

You don’t have to use another program to compress the file because file -> save as dialog has a compress option (uses gzip). Difference being that it doesn’t change the filename and one doesn’t have to first uncompress to open the file.

Oh, I wondered if the scale might be an issue! The clothing was very small because the scene where I need to animate them (eventually on a dancing lady), contains some enormous objects. A few days ago I did experiment with the clothes at ten times the size, but my cloth settings were so far off, I was still getting crazy results causing the cloth to crinkle up (Hence my experimentation with the Structural Stiffness and pinning). Since finding settings that give better results and putting Subsurf below Cloth modifier, thanks

I’ve re-experimented with the clothes being ten times the size and found that is much better.

I’ve eventually deleted the Structural and Pinning groups completely as now find they’re not needed. I had to change a setting for the hanger to stop the cloth going through it.

You mentioned seams - I’ve not yet looked into that… So I’m now learning about seams. (The top I’ve been working with was just extruded from a model I imported from Make Human). Now to learn about, and make, seams! . .

Thanks for telling me about the gzip compress option. I ticked the Compress option box then saved the blend file but doesn’t seem to have made any difference… Whether or not it’s been baked makes a huge difference to file size.

And I noticed in the file you adjusted, you unchecked Damping Spring; Thanks; I hadn’t realized that wasn’t making any difference.