This is my first test at Ray Mirror and at a Depth of Field composite. What do you guys think?
[ATTACH=CONFIG]132639[/ATTACH]

The materials actually looks pretty nice. But the scene and the lighting work needs something. But still very well done

Yeah get a bit of SSS on the porcelain.
Good modeling!

Models look good, but post-processing needs some work. Why do you use the composite nodes to only blur out the background plane? Makes no sense.

I’d change the background plane to a ramp so that you’d get nice curvature to the background. Then I’d move the camera down and a little closer to the cups so that the DOF would affect slightly the first and the last cup.

Thanks for the support!
@BrainsUnlimited
The ground plane is actually a curved backdrop. But I guess you can see that because of my terrible lighting.

I think if you use soft shadows (turn the samples up on ray traced shadows) and enable AO (ambient occlusion, it’s in the world tab, and set it to multiply not add) it will look much better. I like your materials! And the modeling in nice too. Also I’m having a hard time telling what’s is and isn’t in focus. Make sure you have your zbuffer connected to the dof blur and also it set to use it. Sorry if you knew that and set it right, it just looks a little funny. Oh, and the down side to doing the soft shadows and ambient occlusion is that it will take a lot longer to render. But I think it’ll be worth it! Keep up the good work!

Okay took all of your advice. But something odd happened to the render maybe somebody could tell me what happened. Anyways here’s an update. See that odd dark brown square… that is what i was talking about.
[ATTACH=CONFIG]133206[/ATTACH]

Maybe the dark square is a uv mapping problem… But with out the blend file I couldn’t say for sure. Also I think the lighting could use some work, what is your current lighting setup? You could post a screen shot if you want. Otherwise I think it’s getting better! Keep up the work!

Both , the mirror works are good but in my opinion, the first one was better that the second one…

@dgriffin91
If you can tell me how to attach the file in a post I cant show it to you.

You can add them by using the “mange attachments” when you make a post, if you are using quick reply then click “Go Advanced.” The “manage attachments” is below the comment box under “Additional Options”

@dgriffin91
Thanks. Here is the Blend file. Note I have changed some things such as the camera angle and the SSS. [ATTACH]133385[/ATTACH]

Ok, so it had me stumped for a little while, but the dark square is coming from a plane that is hidden. If you open the outliner you will see that you have a few objects hidden in the viewer, but set to render.

Also the sun lamp is set to not cast shadows, that is part of what is still making the image look a little off. Because of the sphere around the scene the sun, if set to cast shadows, will have the whole scene in a shadow. If you make a material for the sphere and turn off traceable it will not cast a shadow on the whole scene. Also, you can set the sun to have soft shadows by increasing the samples. For this scene I think it might look cool to use a area lamp with soft shadows. Just an idea… Anyway, keep playing with it, and I think you’ll get a pretty good image!

Okay I have to start off by saying thank you so much dgriffin91. I would have never figured that out without you. Right so here’s and update hope you guys like it. Edit: I know the sun lamp may be a little too bright. I’m in the process of fixing it.
[ATTACH=CONFIG]133566[/ATTACH]

Here is the latest update: I have replaced the sun lamp with an area lamp and set it to soft shadows. 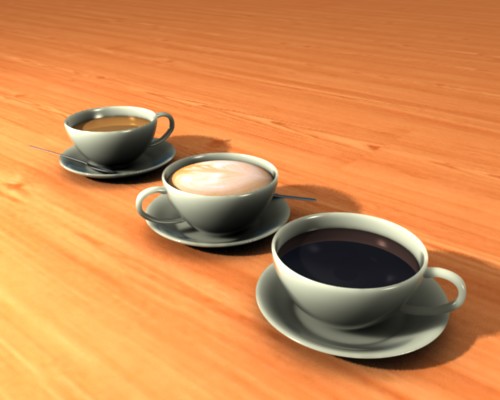 Looking good! I think if you played with the texture on the table a little (bump map, subtle starches, etc…) and also had the table end and just show a wall or something behind it, you could have a pretty good looking scene! Right now it just looks a little funny with the wood going on forever… hahaha

Ya I’m gonna try that. Oh I deleted the attachments from my previous posts by accident. Sorry to those of you who would have liked to see the progress.