Collison setting for Character and ground?

I created a Character with control settings (but no rig or anything else) and a Plane with different slopes to test the control settings I made.
First problem: I noticed that the Character slides off of the slope if I don’t move him.
2nd problem: The character doesn’t adapt the ground, he stays in the same angle as if he’s on a flat ground…

What do I have to change in the sttings to solve the problems? 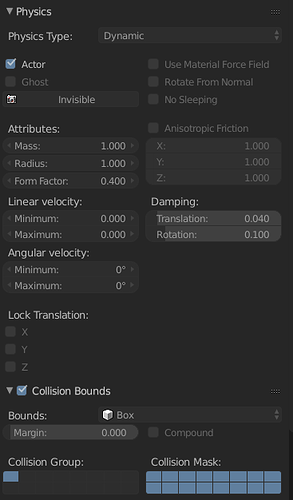 and the floor settings: 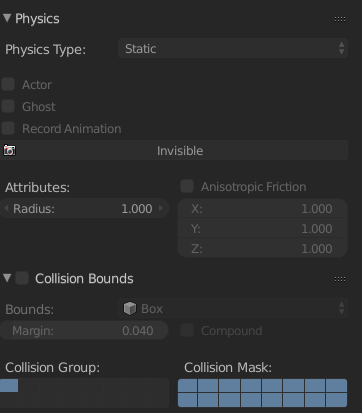 I hope someone can help me with my problems

this is the reason I do not use dynamic controllers, but most everyone else swears by them

I think the main issue here is you need to set friction relatively high…hopefully others will chime in a give a better response…but if I were you I would play with the friction settings.

Problem 1:
We’ll need to know how you’re moving the character to fix this. If you’re just using the ‘loc’ on logic bricks, then your object won’t obey physics properly. The general thing to do is either to:

The servo motion logic brick is a rather handy one, as it accepts zero as a valid target speed, and you can select how much force it applies on which axis to try achieve the target speed.

Problem 2:
Dynamic objects do not respond to torques, only to forces. There are two ways to overcome this issue:

I think one of the constraint logic bricks does this (Force Field with Rot Fh enabled. Set it’s force to zero so it only effects the rotation, enable per, set direction to -z, set a distance for how far away to detect a surface).

This answer is free, and is regarded as an extended reference to BGE.
Hi.
The type of physics - a “character”, created for simple games, and illustrative works. He is not perfect. If you want to solve those questions that you asked - only “dynamic” physics, and Python.
I made for you a small and simple example - tank01_test.blend (705 KB)

The first question I decided was simply balancing the weight of the object - line 26-31
The second question was decided on the lessons of ThaTimst3r - lines 14-15
https://www.youtube.com/watch?v=Qwpox2maSi8Of course this is the simplest solution, it is possible to implement it more professionally.

Good luck in creative work.
Thank you for attention.

p.s. If the issue is resolved, please put before the title of the topic - SOLVED, so it is more correct in relation to users and administrators of the forum

But I have another problem now: the character bounces when he walks down a slope…

For the best … creativity, you put a simple example, and we will try to add to it. It’s something … a simple esoteric. You created the basis, albeit with a problem, and we added to it - but the basis is yours. But do not forget to thank the assistants - simple - Thank you.
It would be better so - here is my example, help me PLEASE solve such problems:rolleyes:. And after solving the problem add - it is decided for all who do not know this decision.

maybe check the material elasticity settings? (its just beside friction )