I got this game idea into my head but I probably wont get around to making it quite yet, cause of school and stupid things like that.

I know this sounds a lot like No Man’s Sky but I think doing this game in 2D and actually having some decent game-play will be cool.

So, you start on a planet and you get, say, 5 ships to start with. You then gotta use your mouse to click and drag (like a slingshot) to shoot each ship off to the other planets. I could also make gravity factors so that the ship paths can be altered by nearby planets. Once a ship hits a planet, a colony is built there.

Here is the iffy part. I’ll probably have to make enemy AI colonizing ships against which the player must compete so that they do not colonize all the planets before them.

I will also have different ships with different flying and colonizing characteristics that get unlocked after a certain amount of planets have been colonized.

Like I said before, I probably wont be able to start on this game for a while but I will create some sketches &c. so that this thread doesn’t stay too bare. 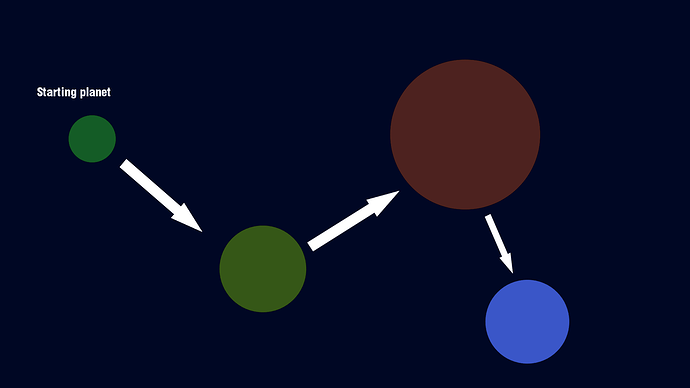 And I can have the ships can collect stars for bonuses too.

as for the tricky part…just have mirrored properties on random planets, and basically mirror what the player does…that is a simplistic approach.

Hehe, I love the idea of colonizing a whole galaxy within a slingshot arcade. It would be awesome if you manage to keep the user interface dumb simple – ships get built automatically based on some conditions, and you just shoot them blindly, trying to hit the planets that float around. The gravity simulation makes it nicely unpredictable, yet it is very easy to code.

Here’s just a lil something I made to test out my idea.

the end user never has to see this part, but we could generate a planet and then save the surface to a bunch of .block files once C-106 delta is done with BP_Player and do a high quality universe.

maybe for each terrain tile have a LOD?

we can kick no mans sky’s ass.

No, you were saying you don’t think you could do better than no man’s sky,

I think you could.
it’s all about how to organize it.

I didn’t say that. I was just alluding to the fact that exploring the galaxy all the way to the center is a lot like what No-Man’s Sky was about but that my game will actually be fun.

I think ive played this game. It was maybe for Win 3.11 or Win 95. It was a free space game made by a father and a son. The graphics were simple 2d, where you colonize a planet and even you could send nukes toward other ones.

I like the idea, though what I’m picturing is probably not even close to what you have in mind… Can’t wait to see what you come up with :yes: