Like every other kid and his duck, I decided to get into the world of 3D images. I bought a spiffy new computer that I only use for Blender. I uninstalled and re-installed Blender 2.65, as that is the latest available version. I’ve followed thirty or more tutorials on how to make good textures, how to use good lighting, and how to increase my render speed.

Why, then, do my images persist to look flat, my lights refuse to behave as I hope they should, and my image quality look like a mimeograph from 1978 even after 500 passes in Cycles Render?

I’m praying it’s just some little detail I’m overlooking, but I have an i7 quad-core processor, Nvidia Ge-Force GTX 660M (I’m using the GPU rendering, but not noticing an appreciable speed output), and I’ve set my tile size to 256 x 256.

Here’s a sample of my mesh. Any advice on how I can improve what I already have is appreciated.Spaceship.blend (1.49 MB)

Check your world settings. Click use nodes and change the world background to black.
Without your textures, its hard to tell what the problem is.

Spaceship.blend (1.49 MB)I clicked on the link I posted, so I could see what you were seeing, and all my node information is viewable in the ‘Node Editor’ section. So – I was surprised that I have to click ‘use nodes’ in the World setting, but not nearly as surprised as to see that now all my flat textures have become purple nightmare colored after selecting ‘use nodes’ in World. Here’s the update:

I can’t tell if this thread has moved to a different location. On the off-chance that it has, and after having perused the site a bit more, this is likely something for ‘technical support’ rather than ‘general discussion.’

Your hardware should only affect the rendering speed…
Maybe post a rendered picture of your scene?

[ATTACH]211797[/ATTACH]I clicked on the link I posted, so I could see what you were seeing, and all my node information is viewable in the ‘Node Editor’ section. So – I was surprised that I have to click ‘use nodes’ in the World setting, but not nearly as surprised as to see that now all my flat textures have become purple nightmare colored after selecting ‘use nodes’ in World. Here’s the update:

Purple means that the image textures are missing.

I do appreciate the help thus far. It feels like my approach is technically correct, but there are mysteriously unchecked boxes in the Blender interface. Indeed, after clicking on ‘Use Nodes’, and quietly wondering, “Why was I allowed to configure every single material using nodes, but then having the rug pulled from beneath me by not being able to use them?”, I found that after saving and re-starting Blender, the desired changes took hold more permanently.

I’m attempting high-resolution graphics for printing, and I only recently discovered that I could manually input my resolution to greater than 1920 x 1080, up to 10,000 x 10,000. Last night, I accidentally stumbled upon the fact that I could additionally raise the percentage scale for resolution above 100%. THAT was a feature I had not guessed at, judging by the shading on the slider bar. I haven’t dared a 1000% render, although Blender appears game to give that a go.

This image was rendered at 200% resolution, 1920 x 1080. I feel that the texture technically mapped halfway decently, but it looks inappropriate on this craft. I was aiming for a harder, glossier, reflective look on the band at the top, nose, and a few other details (my ‘chrome’ material). My render time was 1:39 for 1,000 passes at 1920 x 1080 (x200!) which should come within the ballpark of a 6.5" x 3.5" image at 600 dpi, if everything works out properly. I recognize that I’m asking for more processing time than most people, who only require 72 dpi for monitors.

As a final aside, the day cannot come soon enough that I may sit on the other side of the screen, answering the noobish questions I’ve had for far too long. Thanks, everyone!

Edit: 24 megabytes seems to be too large for the uploader to accept, perhaps? I’ll halve the resolution of the rendered image… 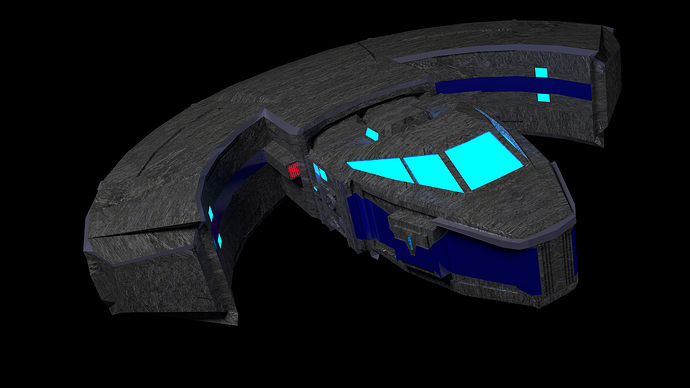 I hope everything still reads correctly. I expect it will.

Tame, Rich33584 – thanks for the observation. I have so very, very far to go, but just those few questions you both asked me helped enormously. Thank you.