Is there a way to make different metaballs (/other metathings) have different materials? like in this piece? i know it can be done by converting it to a mesh, but i don’t want it since i want to animate the metaballs…

I don’t think Blender alone can do that yet. Check with external renderers. For instance Povray does support mixed materials on blobs (=meta)

okay i’ll try that… any chance of it being implemented in blender 2.5?

The mesh data that makes up meta objects in Blender is hidden to the user, so you can’t assign materials to individual faces; since you can’t view/select individual faces. In the image you supplied, the different meta objects were just colored differently, but for an application like Blender to do that, when objects are joined, it would have to figure out which material belonged to which faces and which ones are shared, then interpolate the results in between. Figuring out which faces are which would be difficult too, since the meta geometry is constantly changing… just change the veiwport shading to wireframe and watch what happens as you play with some meta objects…

tnx for your clear explanation, at least i know why its not working now…
btw is it possible to interpolate between materials on regular meshes?

Yep, by using material nodes, you can combine materials in all kinds of ways! Here’s a link to a good tutorial on this:

If you just want a simple explanation on interpolating materials, I can do that too… just let me know!

When you convert meta objects into meshes, you get some strange, non-smooth looking results. You might just have to model it by hand, I tried this with some icospheres and found it pretty easy using proportional editing. As far as materials go, it could get complicated using nodes, I would suggest unwrapping your finished model and texturing it, essentially using one material and a texture that you create by hand, though that could get tricky depending on your level of experience. Keep me posted!

btw why do converted metaballs look so f’d up? even when subsurfed twice you still see the vertices…

Yeah, the subsurf doesn’t work because there are a lot of tris mixed in randomly with the quads, and the quads are all different sizes… subsurf works best with organic models. As for the reason behind this, it’s just the way blender tries to build a mesh and keep the polys aligned to a grid while conforming to a certain shape, like a sphere; but why it looks smooth as a meta object and rough after being converted to a mesh… I don’t know. Good luck with the texturing though!

I was wondering this myself…
I was also wondering if different fluid objects can have different materials, but no luck. :no:
It would be cool to see how the colors would mix together though…

consider using the metaballs to get the shape you want and then use a shrinkwrap modifier with a cube and extrude around the shape of the metaballs. Subsurf modifier and voila! Meta shape with a mesh.

Alright, I’ve attached a pic of what I did in about 15 mins. I used icospheres and modeled them to resemble meta objects. I then unwrapped them using the “Project from veiw” option while looking at the mesh straight on. I exported the UV’s into photoshop and did some painting and blending, then mapped the texture to the UV coordinates. It was a pretty simple process and gets the right effect.

@moley I tried doing that and it didn’t work that well, the shrink wrap modifier made things really skinny in between where the meta balls are joined and messed things up in other places. I like the icosphere method better, and I feel more in control of how the outcome looks.

@Minifig In a fluid simulation, even though you can have multiple fluid objects, those objects aren’t what make up the actual “fluid”. The domain becomes the fluid, and you usually place the fluid objects on a separate layer where they are not rendered. Because of this, the material on the domain decides the material of the fluid; all the fluid objects do is tell the algorithm what volume of fluid there needs to be and the shape/location of that fluid. I do think it would be cool though to see the colors mix, especially if you could set different parameters for each fluid object, eg. have some water fill the bottom and have an inflow that pours thick oil into the water:D. However, solving equations for how one body of fluid reacts is hard enough without mixing them together, so we probaly won’t see that anytime soon:mad:! 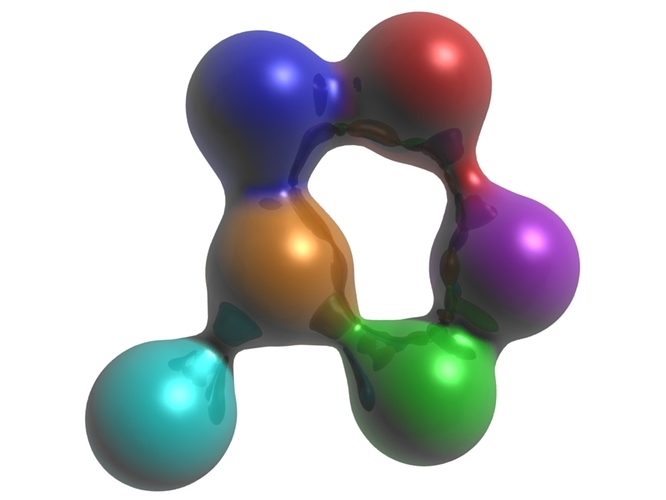 renderer, that looks cool… and about mixing fluids, i saw a vid which had that, but it was realflow i think…

Thanks th555, but regarding your original post, you wouldn’t be able to animate it though… what exactly did you need it for?

I didn’t know mixed fluids was possible… That would be really cool, but when I said we probably won’t be seeing it anytime soon, I was talking about blender. Really, I don’t see that much of a use for it, unless your just messing around, in which case it’s not that important. I’m sure it would take a long time to bake as well!

“I was also wondering if different fluid objects can have different materials, but no luck. :no:”
Yeah, I know that you can’t yet. That’s why I said that I didn’t have any luck.

I don’t know about realflow, but I’ll stick to blender for now.

i just discovered how to make metaballs look normal by retopoing, like described here…

btw why do converted metaballs look so f’d up?
if you decrease wiresize enough you can get a prety decent mesh (see pic)…maybe not if you want low poly though.

@moley…seems like a good idea. i tried it and couldn’t get a reasonable solution without a lot of messing around… 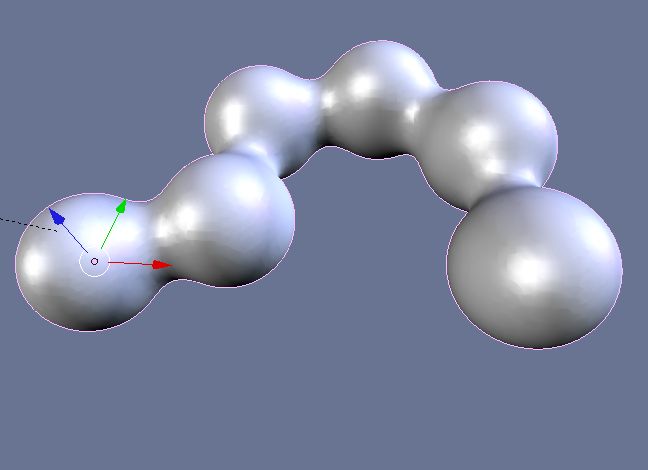 Neither could I using the shrinkwrap modifier, but using the retopo tool is a pretty good idea.

@steeve: I like to work with a wiresize of .2, which is what metaballs render at by default, and that produces undesirable results. I’m not sure what resolution you used, but the non-smooth issues are still there. I’m sure you could really make them high resolution, but that just seems like a waste of RAM and draw time in the viewport. I usually like to come up with creative solutions around problems, instead of just making the problems less noticeable, and the method th555’s link uses is a nice workaround in my mind:D!

yes, i hear what you are saying.

i use retopo a lot, mainly for producing terrains. which is straightforward because the objects are just modified planes.

but i’ve never got my head around using retopo for sphere-based objects. that link is great…will spend some time on it…