Seems logical to use the OCIO Display Transform option, no?

Yes it does, but none of the offered options does the trick. 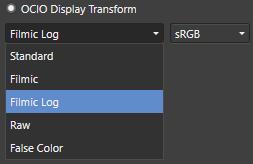 Then we get the same result. What is different is that first we have to add LUT and then Exposure.
So it is just that the ordering is swapped.
But, what I also found is that if we do it this way, LUT behaves different. Looks now change exposure of the image instead of the contrast.

Looks now change exposure of the image instead of the contrast.

Something is wrong if that is the case. Perhaps there is a hidden nonlinear bending of the emission intensities there happening somewhere?

The reason is that the contrast lookups move the middle grey point up to the display referred output middle grey, which is then inverted by the display hardware itself. One way that something akin to an exposure shift could happen is if there is already another nonlinear warping happening, moving the scene linear value of 0.18 to somewhere higher, and then the nonlinear contrast adjusts it again.

Couldn’t say, I’m not an expert. Only thing I know that this was done on underexposed raw data so the 0.18 shift could happen? I used rather high exposure (+7) which was on top of the LUT. And OCIO transform is Filmic - sRGB, not Filmic Log.

And OCIO transform is Filmic - sRGB, not Filmic Log.

This is why; the version in Blender bakes the Log and Base Contrast. Use the separated version and you should be fine.